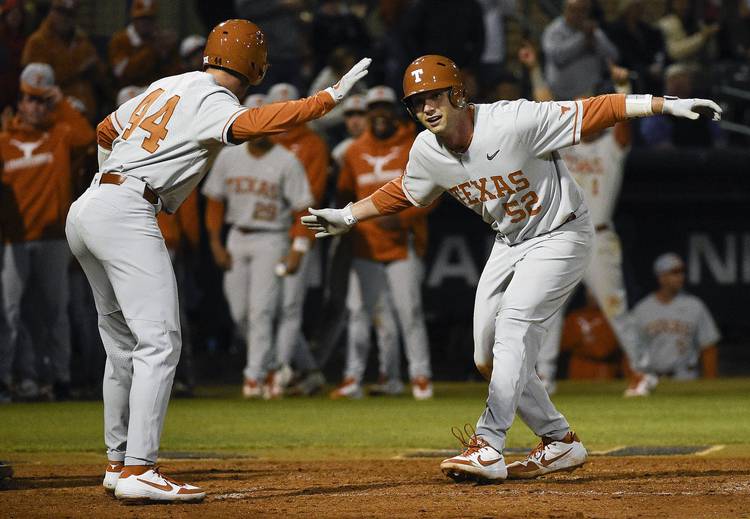 HOUSTON — Having flipped the page on its 2019 season, Texas wrote a win into the first sentence of its newest chapter on Friday evening.

Texas overcame a second-inning setback and opened its 2020 campaign with a 7-4 win at Rice. The Longhorns were paced by three home runs, two of which were hit by players making their Texas debuts.

Absent from the Big 12 and NCAA’s tournaments after last year’s 27-27 showing, Texas won its first game for the third straight season.

“We said this is a new team,” Texas junior Zach Zubia said. “We don’t really talk about last year at all. I think that this is important to understand that we do have new kids, a lot of new starters, a lot of new faces. It was really fun to see them ball out tonight.”

Before Friday, Texas had last scored a run in the first inning of a season in 2013. But against the Owls, senior Duke Ellis tripled with one out in the first inning’s top half. He then scored on Zubia’s sacrifice fly to right field.

“I think we lacked in home runs last year a little bit and just hard-hit balls in general,” said Zubia, who finished his night with four RBIs. “We did a really good job today about hitting the ball hard when it’s pitched in our zones and laying off the pitches that pitchers want us to hit.”

“I thought we had quality at-bats when we weren’t successful as well as producing runs,” Texas coach David Pierce said. “Just good all the way around. We had a couple of base-running mistakes, but other than that, you’ve got to be pleased with opening night to score seven runs.”

That offense — which was produced a year after UT averaged 5.3 runs — was enough for UT starting pitcher Bryce Elder. The reigning ace of Texas’ pitching staff, Elder allowed two earned runs and four hits over six innings. The junior right-hander recorded six strikeouts, but his night also included an error on a pickoff attempt.

Elder ran into some trouble during an adventurous second inning. He hit three of the eight batters that he faced, and one of those Owls was plunked with the bases loaded. Rice also scored on an error and exited the inning with a 2-1 lead.

“It was kind of a battle out there. I would make two really good pitches and then two bad ones,” Elder said. “I don’t know what it was. I’m not going to look into it too much. We got a win and I’m going to move onto next week.”

Texas has opened three of its last six seasons against Rice. The Longhorns (1-0) and Owls (0-1) will return to Reckling Park at 5 p.m. on Saturday.

Around the bases:  Ranked 171st nationally in fielding percentage last season, Texas committed three errors on Friday. … Stehly, a transfer from Orange Coast College, went 3-for-4 with a double and homer. … Senior Donny Diaz struck out two Owls during a perfect ninth inning. Both of Diaz’s saves at Texas have been earned against Rice. … Lago Vista graduate Alex DeLeon allowed six runs and six hits over a four-inning start for Rice. Westlake product Daniel Hernandez led the Owls with two hits, a run and a RBI.