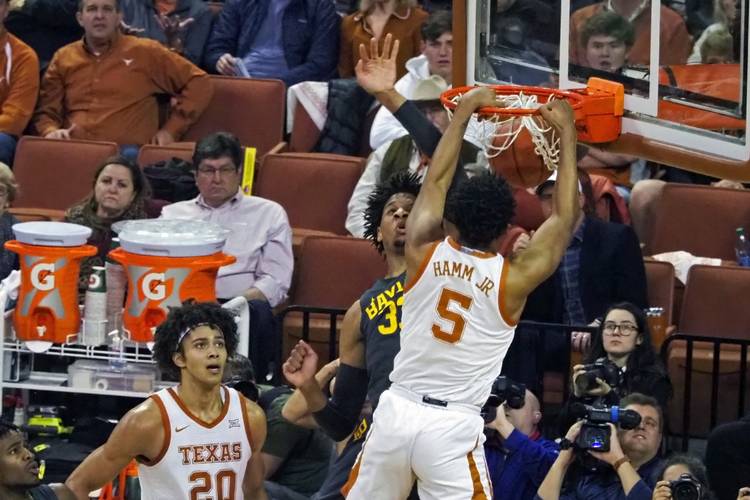 DES MOINES, Iowa — The weather hovered in the 20s on Friday when Texas landed here in the heartland. With 18 mph winds, it felt like 4 degrees.

Factor in Jericho Sims’ back injury, and it sure feels downright arctic.

The Longhorns had no update Friday about their athletic big man’s injury that will sideline him indefinitely, possibly for the rest of the season. They’ll head over to Ames for a Saturday matinee against Iowa State, another team that’s gone quite cold.

Texas (14-10, 4-7 Big 12) has seen its frontcourt darn near wiped out. Gerald Liddell has missed six games with a back issue. Kai Jones is battling a high ankle sprain. And now Sims, arguably Texas’ best player, is out — possibly for good.

Coach Shaka Smart announced Sims’ back injury on Thursday, saying the 6-9 junior has tolerated it for months. “Definitely dealing with some discomfort, some pain,” he said.

Iowa State (10-14, 3-8) is having to navigate life without standout guard Tyrese Haliburton, who has been lost for the season with a wrist injury. Still, the Horns are critically thin in the paint, and it’s time for reserves Royce Hamm Jr. and Will Baker to step up.

“Starting with Royce, he’s a guy that we just want him to do the things that he does well,” Smart said. “He can rebound the ball well, he can play with great energy. He’s got good athleticism and good strength. So that’s something that we need from him.”

Hamm, a 6-8 junior, has this odd ability to flash incredible, mind-boggling athleticism at various times, like shooting stars in the night sky. Whoa, did you see that? Dang, it’s gone.

Like that ferocious block against Lipscomb in last season’s NIT championship game. He rose up for three blocks against Texas Tech last Saturday. But Hamm can also turn it over, like he did three times Monday against Baylor. His inconsistency has limited his minutes.

Baker, a 6-11 freshman from Westlake, is still an unknown commodity. He was billed as a long-range shooter coming crosstown to UT. Thus far, he’s 1-for-25 from 3-point range. In limited playing time, Baker averages 1.4 rebounds.

“With Will, like a lot of freshmen, he’s gone through some some twists and turns and just trying to figure out how he can be effective on the floor,” Smart said. “We know he can be a really, really good player. We believe in him. And if he does get added opportunity out there on the floor, it’s exciting for him to try to make the most of it.”

Kamaka Hepa, a 6-9 sophomore, is more comfortable on the perimeter, so he’s unlikely to mix it up in the paint. The player tailor-made for some action down low is redshirt freshman Brock Cunningham, a 6-6 wildcard also from Westlake.

If nothing else, Smart could play Cunningham just because of the freshman’s hustle and five fouls. Cunningham has appeared in only nine games.

Smart did say this week that he could use more zone defense both against Iowa State and in future games out of necessity. That’s not Texas’ bread and butter, though. Even Smart conceded, “It’s something you might see us do more.”

“Yeah, I think the biggest thing is foul trouble,” Smart said. “You want to, as much as you can, keep your best guys on the floor. Give them a break when you can, for them to get their wind but certainly zone might be a way just to throw a team off for a possession or two.”

Sims’ injury only heightens the pressure on the Horns and Smart, who wants to avoid missing the NCAA Tournament for a second straight year. The pressure on Smart, and on athletic director Chris Del Conte to consider a coaching change, is growing.

But Smart and this team still control their own destiny. Wins over Iowa State on Saturday and another over TCU next Wednesday can revitalize the club before a road trip to Kansas State next weekend. All three are winnable.

It’s the closing stretch that will be most difficult. Texas hosts West Virginia (Feb. 24), then plays on the road at Texas Tech (Feb. 29) and Oklahoma (March 3) and finishes the regular season against Oklahoma State (March 7).

“It’s got to be about guys stepping forward and your team coming together around the guys that are healthy and playing your best basketball with that group,” Smart said.