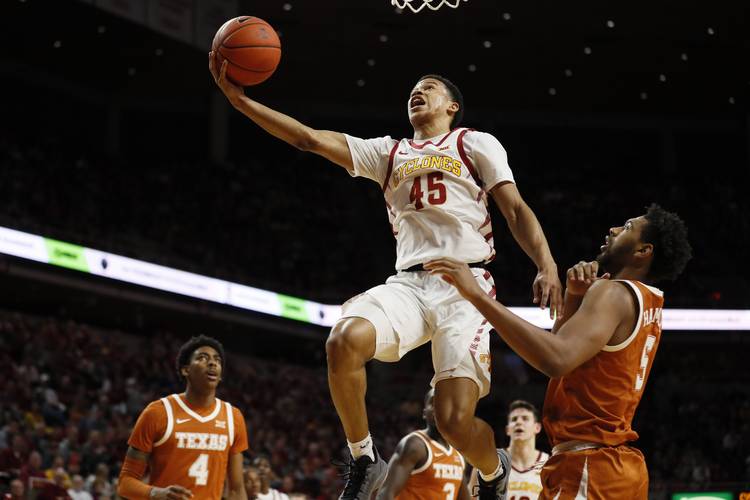 AMES, Iowa — Forget the NCAA Tournament. And for the moment, set aside the NIT.

At this point, Texas needs to focus on finishing the regular season with a winning record.

Texas was humiliated again Saturday, losing 81-52 to a mediocre Iowa State club that is still three games under .500. With this latest debacle, the Horns are 14-11 overall with six games left in the regular season.

Asked if he was worried where this season is headed, Smart said, “Just extremely disappointed in today’s game. Not really thinking beyond that. This is not who we want to be.”

For the record, Texas is still 4-8 in league play, so mathematically there’s still a chance to make the NCAAs as an at-large team. Or the Longhorns can win the Big 12 Tournament and get an automatic berth.

But anyone who understands basketball — or competitiveness, for that matter — can see which way this team is trending. Texas is riding a four-game losing streak. An NCAA berth feels like wishful thinking. No serious person inside Cooley Pavilion cares about the NIT. A coaching change now seems like a realistic possibility.

“Just want to win the next game,” Smart said in the hallway after his press conference. “Obviously we have to play way better than we did today in order to do that. Our guys as a team are capable of being better, but we were not today. That’s something we have to address and change.”

Texas just didn’t have the wherewithal to stomach the fight at Hilton Coliseum. Even the Iowa State students in the announced crowd of 14,255 — typically the most profane bunch in the Big 12 — were subdued.

“We didn’t come out with the level of aggression and passion that we had the last couple of days in practice,” Texas guard Andrew Jones said. “We were just real sluggish out there.”

Said UT’s Courtney Ramey: “That’s frustrating to me, to see the look on people’s faces, that they kind of gave up.”

Sure, Smart knew it’d be tough sledding without Jericho Sims. Even the referees couldn’t believe he wasn’t warming up. One official walked up to a reporter and asked, “Jericho’s not playing?!” No, sir. Back injury. “Wow!”

Sims made the trip to Ames but was not made available to a reporter afterward. He will undergo more tests on his lower back in the coming week, a team spokesman said. A source said the injury was something that would’ve sidelined Sims no matter the team’s record.

But Smart probably didn’t envision how Iowa State’s Solomon Young would have a field day against Royce Hamm Jr., Will Baker and Kai Jones, who did bounce back from a left ankle injury. At one point early, Young had 14 points while Texas had just 13 total.

Young finished with 17 points as his teammates took over. Michael Jacobson had a team-high 21 as the Cyclones (11-14, 4-8 Big 12) shot 57.1% overall. In the arena, the second half felt like a controlled scrimmage.

Ramey finished with a career-high 21 points, and Andrew Jones had eight. Otherwise, the Horns shot 29.3% and went 5-for-20 from 3-point range. The visitors were beaten on the glass (minus-13), turned it over 12 times and fell behind by 26 with 10 minutes, 42 seconds remaining.

Texas didn’t escape injury-free, either. Guard Matt Coleman III tried to play through a bruised heel and couldn’t finish. Smart played Ramey, redshirt freshman Brock Cunningham and his three freshmen down the stretch in hopes of running the clock and getting out of town.

“I just think today some people were just not ready to play,” Ramey said. “With a game like this, down a couple of people, everybody has to come in ready to play. Some people have bigger roles, and they just didn’t do enough.”

At least one squirrel saved some Texas fans back in Austin the agony. Seriously.

Erin Hogan of 104.9 The Horn said a squirrel chewed threw a power line and knocked out the station’s ability to air Craig Way’s broadcast in the Austin area for a while. Austin Radio Network’s technical people scurried around and got the game back on the air by halftime.

The same thing will happen to Texas’ season unless something drastic happens. Anything is possible, but it’s getting hard, if not impossible, to give this coach the benefit of the doubt.

Asked a second time away from TV cameras if he was worried, Smart said, “To be honest with you, coming off last week, we put a lot of time and discussion and energy into who we needed to be today. I thought our guys prepared well, but we didn’t answer the runs they had. We didn’t have the fight we needed to have. So obviously that has to change fast.”

Next comes Wednesday’s home game against TCU, a team probably still seething over the way the Frogs lost to the Horns in Fort Worth on Jan. 29. This time Sims won’t be out there.

“There’s some stuff we have to fix going into the next game,” Ramey said. “And it’s stuff where we just have to play with bigger nuts, or emphasis. We’ve got to play way harder, play with nuts.”