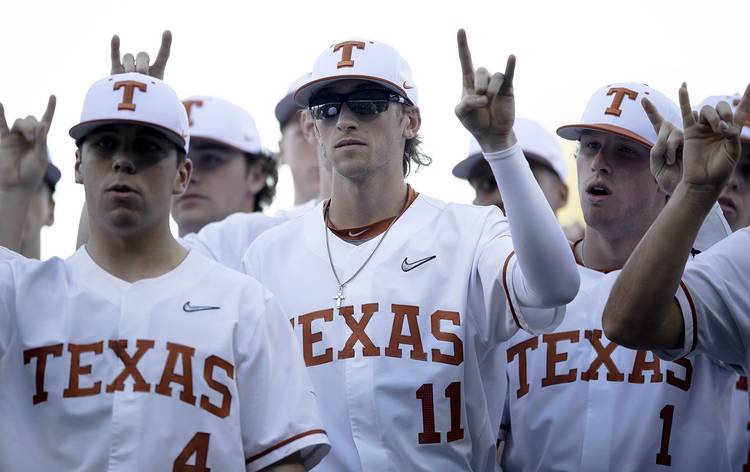 HOUSTON — In the ninth inning Sunday at Reckling Park, Texas was in danger of having its brooms bested by Rice’s bats.

Having already homered and forced a Longhorns pitching change in the ninth, the Owls had a runner stationed at first base, one run down with only one out. But senior reliever Donny Diaz got Owls cleanup hitter Daniel Hernandez to pop up for the second out, and the next batter suffered the same fate as Texas held on for a 5-4 win.

“Overall, just a great sweep for basically a new team to come together on week one,” UT coach David Pierce said. “There’s still so many things to improve on, and that’s kind of been the intent going into this weekend and throughout the non-conference schedule.”

Texas never trailed on Sunday, but the Owls kept the sweep from becoming a foregone conclusion. Rice rattled off 10 hits but also left 10 runners on base. After UT starter Coy Cobb was pulled in the fifth inning, Texas got itself out of two bases-loaded scenarios.

In that fifth inning, Texas’ Tristan Stevens walked a batter after inheriting two runners from Cobb. Hernandez, though, flew out to end the threat.

With Texas leading 5-2 two innings later, Rice loaded the bases with one out against UT relievers Kamron Fields and Andre Duplantier II. But Duplantier escaped the jam after coaxing a routine fly and a ground ball.

“About that jam, I wouldn’t be able to get out of it if it wasn’t for my teammates,” Duplantier said.

Rice chased Midland College transfer Dawson Merryman from his UT debut with a two-run homer in the ninth. Texas turned to Diaz, who immediately registered a strikeout. After the next Owl walked, he got the two pop-ups to end the game.

“After the walk, the game started to speed up a little bit,” Diaz said. “I just took a breath, stepped back, took a breath. I was missing up in the zone, but luckily it worked out for me.”

Pierce said he may frequently use his bullpen this season. On Sunday, he called Stevens “our rock when there’s mess on the line.” He added that Duplantier has “that ice in his veins.” The fourth-year coach noted that Fields was failing to finish his slider over his one-inning appearance and believed that Merryman lost his concentration after pitching the eighth.

The bullpen was an area of exasperation throughout last season. It lost a Texas lead in five conference games the Longhorns would go on to lose. Over the three games against Rice, the bullpen worked 10.2 innings and allowed eight hits and four earned runs.

“I think we’ve got a real strong bullpen this year,” Diaz said. “All we need to do is get ahead and attack hitters. I think we’ll be all right.”

Around the bases: Diaz earned his second save of the season. He missed most of the 2016 and 2018 seasons with injuries and was granted a sixth year of eligibility by the NCAA. … Six of UT’s 11 hits were doubles. … Cobb threw 63 pitches and registered four strikeouts. He gave up six hits, a walk and a run. … Texas’ home opener against UTSA is Tuesday. The Longhorns have six games scheduled at UFCU Disch-Falk Field in an eight-day span.