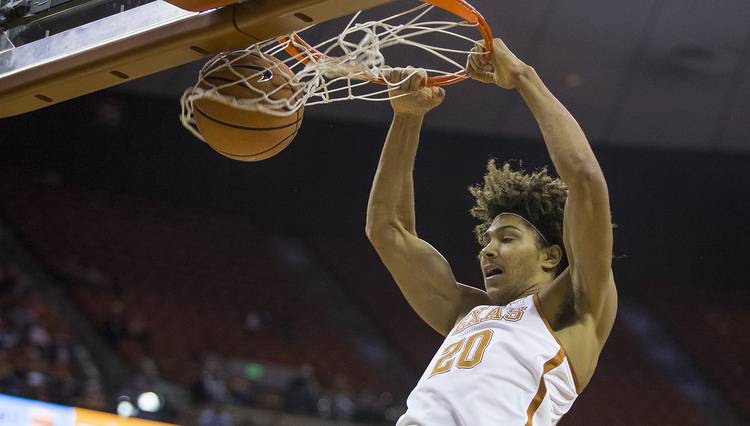 Texas coach Shaka Smart went through a laundry list of injuries Monday and acknowledged that forward Jericho Sims will likely miss the rest of the season with back problems.

For now, the 6-9 junior will “not be playing for the foreseeable future in terms of, you know, the rest of the regular season,” Smart said. Anything beyond that depends on how a doctor’s visit goes Tuesday.

Now the question becomes whether Sims’ playing days at Texas are over, too.

NBA scouts love his overall athleticism, but he’d also be well served by staying one final year in college. People will be whispering both sides of the argument in Sims’ ears in the weeks to come.

In three seasons, Sims has averaged 5.9 points and 4.9 rebounds while shooting 61.8% percent from the floor.

NBA scouts will always gamble on a project. Last year, Jaxson Hayes didn’t have a single double-double during his one season at Texas and was still a first-round pick.

“I think Jericho’s made amazing growth since he got here as a person,” Smart said. “I think this season, we’ve seen tremendous growth on the court. I think everyone would agree there’s a bunch of room to continue getting better. He’s the first to admit that and he’s excited about that. So anything’s possible, but I don’t think that’s where his mind is at all.”

Also Monday, Smart said he was “hopeful” that guard Matt Coleman III could play Wednesday against TCU with a bruised heel injury. Coleman tried to play through the pain last Saturday at Iowa State but was ultimately told to sit down.

“He’s feeling better today than he did yesterday, which was a good sign,” Smart said. “It’s just a bruise. We were a little bit worried coming home because he was in a lot of pain and he’s a tough kid.”

Smart said injured guard Jase Febres also has a doctor’s appointment on Tuesday to see how his injured knee is progressing. As of now, doctors are monitoring the swelling in the joint. “But he’s a ways away from playing because he’s not even really walking smoothly on it.”