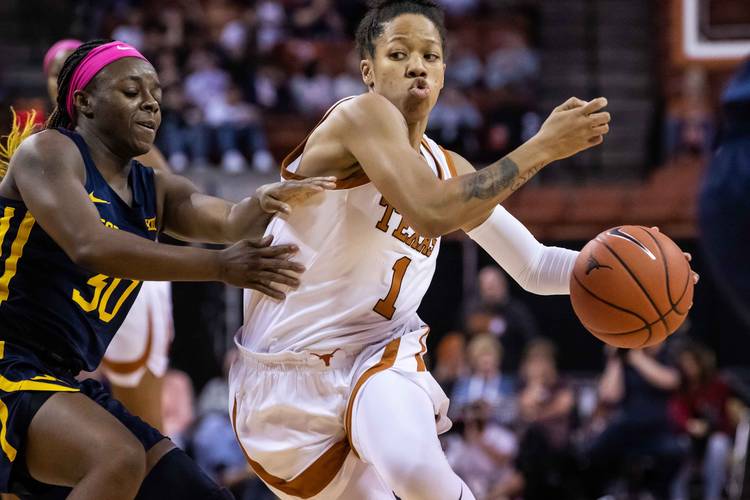 Texas' Sug Sutton (1) goes for a shot against West Virginia during their game on Monday night. (Lola Gomez/American-Statesman)

With five seconds left in the first quarter, Texas point guard Sug Sutton spun past a West Virginia defender and accelerated the remaining 70 feet of the floor for a layup to give the Longhorns a double-digit lead.

Those in attendance rose to their feet for Sutton, and although the Longhorns’ offensive output wavered at times, their energy never did. Texas (16-9, 8-5 Big 12) held on to the early lead in a 50-44 win over the Mountaineers at the Erwin Center.

Fresh off the 15-point loss to Kansas on Saturday in which they allowed a season-high 82 points, the Longhorns seemingly were on the heels of an identity crisis. But a mentally focused showing on Monday led to physical results with difficult finishes at the rim and persistent rebounding efforts.

“I’m just really proud of our team,” UT head coach Karen Aston said, “as far as reacting and responding to a really disappointing and tough loss, but then talking about what we needed to do to get back to playing better, more competitive basketball.”

The Longhorns opened with a 13-2 lead through the first seven minutes. Center Charli Collier played a large part in their paint presence, scoring five of her 11 points in the opening moments. The easy shots down low disappeared soon after, however, as West Virginia (15-9, 5-8) held Texas to just four points in the second quarter.

Inconsistent offense and physical play from both teams began to dictate the remainder of the game with both Aston and West Virginia’s Mike Carey scheming for any sort of edge over the other.

“I think part of it is the nature of the Big 12,” Aston said. “Most teams are not just going to let you continue to do something without making adjustments, and I thought that they made some second quarter adjustments. Then, we have to recognize what might be open after they adjust.”

Texas’ effort showed as it kept West Virginia off the free throw line the entire first half. The Mountaineers later walked off the floor after the final buzzer without recording a single made 3-pointer, shooting 0-for-15.

“We matched their physicality this game,” Collier said, “and at times we were more physical than them.”

Monday’s contest marked the Longhorns’ fourth game in eight days — a brutal stretch highlighted by the loss in Lawrence. But Texas now receives some much-needed rest with its next game coming Saturday against Kansas State. The upcoming period allows the Longhorns to focus on simpler things such as shooting in practice, which has been tough to balance with nearly constant game-planning over the last week, Aston said.

Five games remain in the regular season and Monday’s matchup seemed as important as any of those prior. The Longhorns believe it was a turning point.

“The past couple losses were really sad, really bad,” Collier said. “This win definitely got our confidence up and we can make another run for it.”