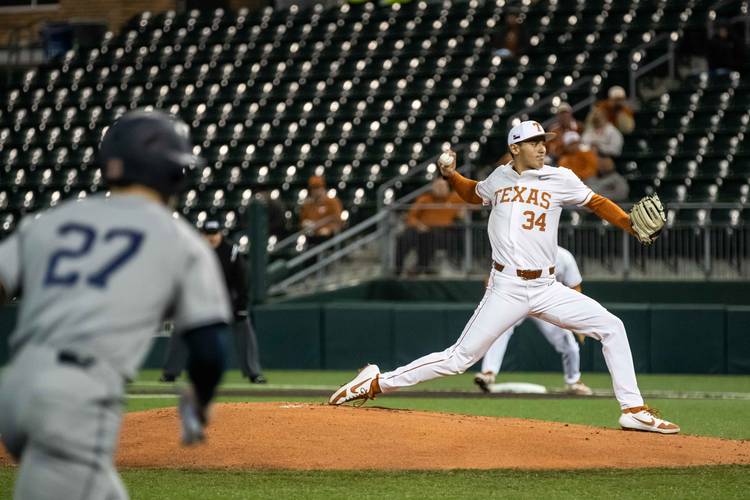 After spending its first weekend of the baseball season on the road, Texas had a successful homecoming on Tuesday night.

Texas overcame a cold start on a 53-degree evening in Austin in a 6-2 win over UTSA. Coming off a season-opening sweep at Rice, the Longhorns improved to 4-0 with the victory in their home opener.

The four-run win kicked off an eight-day stretch in which six games will be played at UFCU Disch-Falk Field. Texas has scheduled 32 home games in 2020.

“It wasn’t the way we wanted to start off, but the big thing we’ve been preaching is same energy from the start to the finish,” junior pitcher Tristan Stevens said. “I think our guys really followed through with that.”

Tuesday’s triumph comes one year after UTSA upset Texas in an early-season game. Following that 10-7 setback, Texas held a ceremonial burning of the game’s boxscores and notes. This time around, a clubhouse bonfire was not needed.

Texas went hitless over Tuesday’s first three innings and found itself trailing 2-0 in the fourth frame. The UT offense, however, awoke during that inning and scored five times. As Texas took the lead, freshman Silas Ardoin and junior transfer Cam Williams both turned two-run doubles into their first hits in a Texas uniform.

That scoring spurt would be all the Longhorns needed against UTSA (3-1). Texas was outhit 8-5 but scored on three of its hits. First baseman Zach Zubia was also plunked with the bases loaded in the seventh session.

“We’ve been ahead in the first three games. Tonight, we were down 2-0, adversity and then created a big inning,” Texas coach David Pierce said. “Great to see that.”

Earning the win for Texas was Stevens, who was also the pitcher of record in Sunday’s game against Rice. Freshman Pete Hansen also recorded a three-inning save. Stevens and Hansen combined for five innings of shutout baseball after a four-inning start by sophomore Cole Quintanilla.

Quintanilla was making his first springtime start since his junior year at nearby Cedar Park High. Tommy John surgery sidelined Quintanilla during his senior year of high school and first year at Texas. He compiled a 4.05 ERA in 2019, but all 22 of his appearances were made in relief.

Quintanilla is viewed by Texas as someone who can start in midweek games before setting into a bullpen role during the weekends. His debut as a starter, though, featured an early hiccup. Quintanilla gave up singles to UTSA’s first two hitters. After Quintanilla fell behind 3-0 in the next at-bat, a conference was called on the mound.

Quintanilla eventually loaded the bases on a walk, but a run-scoring fielder’s choice is all that UTSA would turn that opportunity into. Quintanilla settled down after bumpy beginning and allowed four hits and two walks. Quintanilla gave up one earned run, and the Roadrunners also scored on a two-error play.

“I just think he had some nervous energy, but afterwards he was outstanding,” said Pierce of Quintanilla’s 71-pitch, five-strikeout night. “We wanted to see him anywhere from 50 to 80 pitches… change-up was good, slider was good and once he got down-angle on his fastball, it was good.”