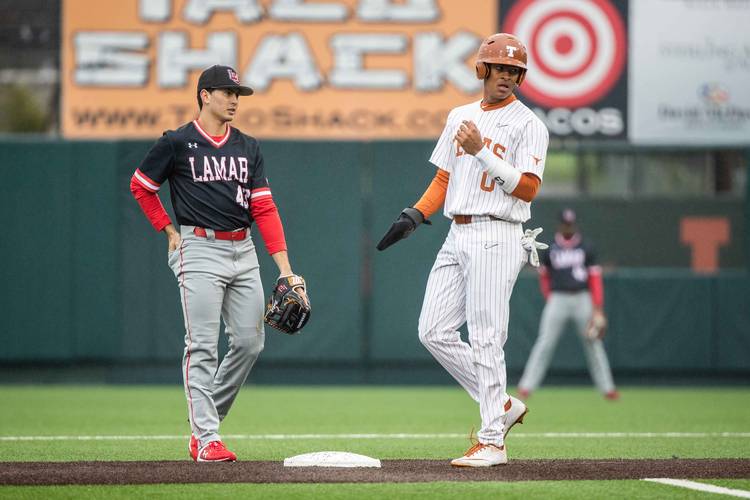 Texas freshman Trey Faltine (0) reaches second base during a game against Lamar in Austin on Feb. 19, 2020. [LOLA GOMEZ / AMERICAN-STATESMAN]

The conditions on Wednesday afternoon weren’t perfect but the record of Texas’ baseball team remained so.

Texas got a big swing from Austin Todd and three innings of spotless relief from Owen Meaney in a 6-1 win over Lamar. Texas improved to 5-0 on a dreary afternoon at UFCU Disch-Falk Field. UT opened its season last weekend with a sweep of Rice before beating UTSA in Tuesday’s home opener.

“We’re 5-0, it’s very early, but what I like about it is we had to earn that 5-0,” Texas coach David Pierce said. “None of the three teams that we played really gave us the ballgame.”

Dallas worked a 1-1 count against Todd, but the veteran outfielder cleared the bases with a double to the gap in right field. In his first at-bat on Wednesday, Todd had lined out to Lamar’s second baseman. Todd got more lift on the baseball one inning later to give UT its first hit and runs.

On a wet day at the ballpark, Texas needed to use six pitchers. Sophomore Kolby Kubichek was credited with the win for a start in which he allowed two hits and two walks over three innings.

Had Kubichek not been announced beforehand as the designated starter, the win likely would have been earned by Meaney. A 6-5 sophomore, Meaney retired the nine batters he faced in his first appearance of 2020.

Meaney went 0-1 with a 4.97 ERA over his freshman year’s six appearances. The right-hander from Houston threw five innings of scoreless relief against a ranked Arkansas team but also failed to reach the fourth inning in starts against UTSA and Texas A&M.

“He knew coming into the fall that he was a guy that was going to have to perform to have an opportunity to pitch for us. He did, he won a job in the late fall,” Pierce said. “I just think getting comfortable and getting the ball down and throwing strikes is key for him.”

Following Meaney’s departure, Will Swope and Sam Walbridge made their Texas debuts. Lamar pounced on both freshmen in the seventh inning, but could only score once. With the bases loaded and two outs, Texas called on its third pitcher of the inning and Andre Duplantier II struck out pinch-hitter Cole Secrest.

Lamar (2-2) got two runners aboard in the eighth inning but Duplantier ended that threat with another strikeout. Texas sophomore Mason Bryant then gave up two hits during a scoreless ninth inning.

Around the bases: JC Correa, the brother of Astros infielder Carlos Correa, went 0-for-4 for Lamar. The Cardinals stranded 12 runners on base. … Designated hitter Cam Williams, a junior who transferred to Texas from San Jacinto College, scored twice in his first start at Texas. … Duplantier struck out three over his 1.1 innings. … Next up for Texas is a three-game series against Boise State. Friday’s opener in Austin will be the first game for Boise State’s resurrected program since 1980.