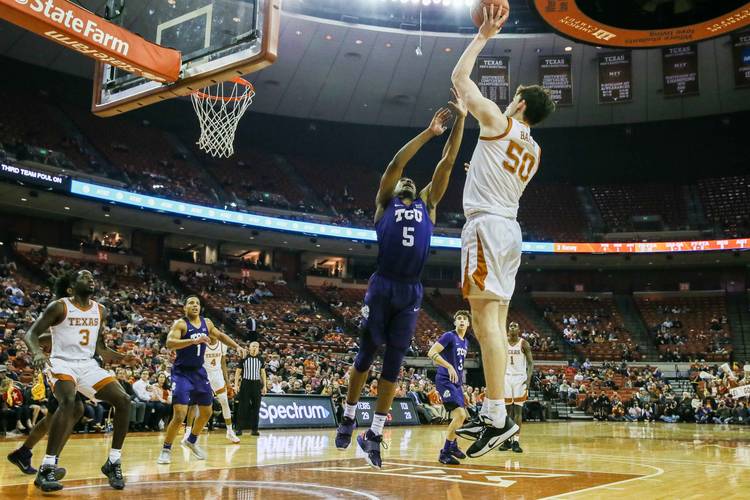 Texas center Will Bakes (50) goes for a shot during a game against TCU in Austin on Wednesday, February 19, 2020. [LOLA GOMEZ / AMERICAN-STATESMAN]

Will Baker’s 3-point shooting numbers game after game all looked the same this season. He started 0-for-3 against Northern Colorado. Then, 0-for-3 at Providence and 0-for-4 at West Virginia.

Oh, for Pete’s sake, why does this 6-foot-11 freshman keep firing away from long range? Heading into Wednesday night’s home game against TCU, Baker was 1-for-25 from downtown.

“Yeah, I try not to think about it,” he said. “I don’t really know the exact number.”

The Longhorns (15-11, 5-8 Big 12) were without three injured starters — Jericho Sims (back), Jase Febres (knee) and Matt Coleman III (heel). But they played terrific second-half defense; the Frogs went 0-for-10 beyond the arc after halftime and couldn’t find any rhythm.

“What did you say? He was 1-for-21?” TCU coach Jamie Dixon said. Actually, 1-for-25. “Yeah. You know, it’s hard to fathom. But give him credit They got their opportunity and they stepped up and they did it.”

Texas coach Shaka Smart has long promised that Baker had 3-point shooting talent. And the coach gave him plenty of chances before sitting him down the last few weeks. Finally, it clicked. Baker gave himself a “B-minus,” a fair assessment after getting only three rebounds in 26 minutes.

“The famous John Beilein phrase, a shooting five man changes the world,” Smart said with a straight face and incredible savvy. “It really changes everything.”

Asked if he thought the missed shots had weighed on Baker, teammate Brock Cunningham said flatly, “Not so much.”

“Will knows he’s a good player, and eventually the shots are going to fall for anyone that works on his shot as much as he does,” Cunningham said.

The Horns needed someone to break character if anything was going to change.

Baker spent last Saturday’s game at Iowa State playing down low. He went 1-for-8 shooting but all came in or around the paint. Baker did not attempt a 3-pointer. On Wednesday, he lined up and let it loose, hitting one early. Then he let fly another one. It connected, too.

Baker showed good footwork getting to the bucket for a dunk. Then on UT’s next trip, he hit a third 3-pointer and raised his arms to the Erwin Center crowd to make some noise.

“Practices haven’t really been too much different, really,” Baker said. “It’s just the extra work I’ve been putting in.”

Smart referenced another well-known basketball mind, Kentucky’s John Calipari, who says that all players need to get in better shape.

“In today’s basketball world, you can either take full ownership for your game, your conditioning, your shooting, your defense or not,” Smart said. “And he’s made progress and that’s why he played well tonight, because it was him making the choices to do the things that we needed him to do for our team.”

Baker hit another three in the second half and slid across the lane for a jumper that gave Texas a 50-45 lead. From that point forward, Andrew Jones and Courtney Ramey carried it home.

Jones set a career high with 21 points, and that was even after getting smacked by Cunningham with 4:15 remaining. Jones’ left eye looked red and puffy afterward, but he said, “I can see you perfectly fine.”

Jones hit two free throws with 45.1 seconds left that gave Texas a four-point lead, and the guard banged his chest knowing it helped seal a win.

As for who whacked him, Jones said, “I don’t really know.” Cunningham probably does. This was the second straight game where Cunningham, another Westlake product, was turned loose and people were hitting the deck.

Given the team’s lack of depth on the frontcourt, Cunningham should get more chances like that in the final five regular season games. So will Baker.

“Yes, that’s part of what I bring to the game,” Cunningham said. “The coaches and the players tell me to bring that energy.”

“When he didn’t have a lot of success, there were maybe some people who questioned how good of a player he was and what he could do,” Smart said. “But I think he deserves a lot of credit for the extra work that he’s put in.”