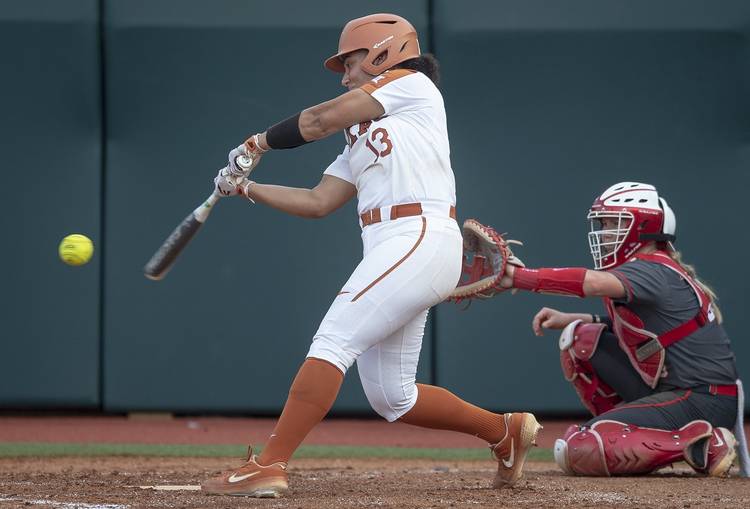 Texas waited until it was almost too late Wednesday night to bring theatrics to McCombs Field.

The few fans who chose college softball by braving the cold, damp weather lingered in the bleachers until the bottom of the seventh inning with the Longhorns trailing and not having scored a run in two-and-a-half hours.

But on an afternoon-turned-evening in which one single Longhorn could not be celebrated more than the next, fourth-ranked Texas found a way to rally past an aggressive UNT team, staying undefeated with a 3-2 win in nine full innings.

During the middle of the seventh inning, with the Mean Green (8-2) holding a 2-1 lead, Texas players huddled halfway down the first base line for a few seconds. “Keep it simple,” center fielder Shannon Rhodes said was the team’s message at that moment. “No one person try to be a hero.”

In the bottom of the seventh, Rhodes was one of two Longhorns to get on base; pinch-runner Camille Corona scored the tying run with one out on a wild pitch.

The Longhorns’ intense struggles at the plate started and ended with Mean Green pitcher Hope Trautwein. The former Pflugerville Hendrickson star struck out five and allowed only four hits and two earned runs.

“As I told the team, it was like facing a postseason pitcher. That kid is really good,” Texas coach Mike White said. “She can spin it up there — has good velocity, good command, difficult to hit.”

Trautwein was replaced after the eighth inning after Texas had tied it in the seventh. The Longhorns (11-0) took full advantage.

In the bottom of the ninth, Rhodes notched her second hit of the night — and only the team’s fifth. But it was the last one the Longhorns needed.

Rhodes drove a full-count pitch past UNT’s diving first baseman and off the glove of the right fielder. Pinch-runner Tuesday Dermargosian scored the winning run.

Texas starting pitcher Shea O’Leary, who entered Wednesday’s game with a 2-0 record and 0.45 ERA, was uncharacteristically down 2-0 in the first inning, the first run scored by a Mean Green baserunner who had reached safely on a UT fielding error.

Courtney Day and Miranda Elish both got into the game to pitch, but the Longhorns provided them little help at the plate. In two separate innings, Trautwein retired three straight batters — once on only eight total pitches, then again on only five.

“I think we had to see the ball down,” White said. “We were starting to chase it a little bit, maybe trying to be a hero sometimes too much instead of following our game plan all year, which is to get balls we can hit.”

Texas finally broke through with not an inning left to spare. Although it was a far cry from the dominating performances of the first two weeks of the season, the Longhorns’ 11-0 start is tied for the fourth-best start in program history. Texas’ best start ever was 16-0 back in 2003.

The Longhorns will play host to Duke, North Dakota State, Weber State and Lipscomb in this weekend’s Texas Invitational.

“We’re on a mission to get better,” White said. “The scoreboard says yeah, we won or lost, but as a coach, I didn’t feel that was our best effort today, and that’s what I’m taking more note on.”