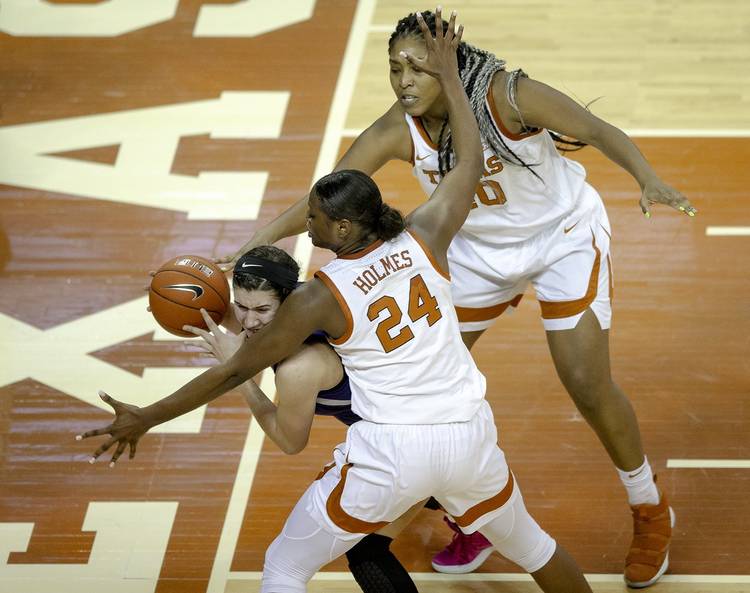 To put it simply, Texas coach Karen Aston thinks the bigs in the Big 12 are having a big year.

As for Iowa State’s Kristin Scott? Putting together a good season. The Texas tandem of Joyner Holmes and Charli Collier? The same.

Two names that did not skip her mind on Friday were Peyton Williams and Ayoka Lee, who will lead Kansas State (12-12, 6-7 Big 12) into the Erwin Center on Saturday for a matinée against Texas (16-9, 8-5). Like their fellow bigs, Williams and Lee have had productive winters.

Williams is a 6-4 senior who was also an all-conference volleyball player during the fall. The 6-5 Lee redshirted last season but seems to be a shoo-in for the conference freshman of the year award. While taking out Oklahoma in overtime on Feb. 16, Williams and Lee combined for 55 points and 32 rebounds.

“They know they play better together,” Kansas State coach Jeff Mittie told a local television station this week. “They really compliment each other well.”

During a 71-63 win in Manhattan in January, Texas held Williams and Lee to 14 points on 3-of-10 shooting. Kansas State and Texas respectively rank sixth and 12th nationally in rebounding, and Aston stressed that her team must keep the Wildcats off the boards. That will involve some “gang rebounding” since the 6-3 Holmes and 6-5 Collier are the only Longhorns taller than six feet.

Last week, the Longhorns stumbled in losses to Iowa State and Kansas. The team bounced back on Monday, though, in a 50-44 win over West Virginia.

“The past couple losses were really sad, really bad, so this win definitely got our confidence up and we can make another run for it,” Collier said.

With five games left in the regular season, Aston would not rule out the possibility of Texas hosting games in the NCAA Tournament. The Longhorns haven’t received a vote from an AP voter since the end of January, but UT is currently the third-place team in the conference with the third-best RPI. Individually, Texas’ RPI ranks 41st.

Aston said she has discussed RPI and building a tournament résumé with a young team that has only one graduate transfer, four seniors and no juniors. That conversation, however, happened weeks ago. Aston hasn’t felt the need to repeat herself.

“We have four seniors, so I think that their sense of urgency and their communication with our young guys should take care of that,” Aston said. “I think they understand that these games are all extremely critical for us.”