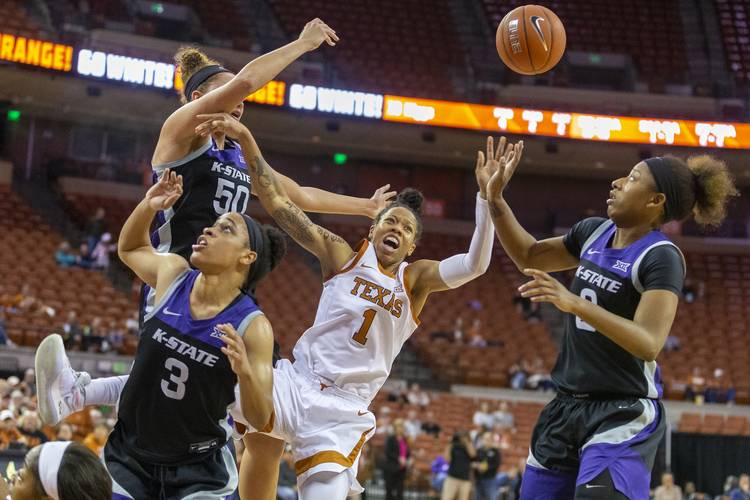 On Saturday afternoon at the Erwin Center, Texas needed to score only 56 points to guarantee that its fans would win free chicken wings.

But alas, both the Longhorns and an announced crowd of 3,392 went home hungry after a 60-54 loss to Kansas State. Sophomore Charli Collier led Texas with 17 points, but UT’s field-goal shooting dipped under 40% for the fourth straight game.

Texas and Kansas State were tied after the first quarter and separated by only two points at the end of the next two sessions. Texas went up by as many as five points in the final frame, but Angela Harris’ jumper with 2 minutes, 8 seconds remaining gave Kansas State a 55-54 advantage. After Lashann Higgs was called for a travel on UT’s ensuing possession, Kansas State went down the floor and got a basket from center Ayoka Lee.

Texas made just three of its 14 shots in the fourth quarter. The Longhorns also missed all five of the 3-pointers they took in the final 61 seconds. Down by three points, Sug Sutton had two 3-pointers rattle out of the rim. Higgs suffered the same fate with Texas trailing by four in the final seconds, and both Sutton and Isabel Palmer missed before the final buzzer.

“We took some shots down the stretch that were good ones, and they didn’t go in,” Texas coach Karen Aston said.

While dissecting the defeat, Aston pointed to the play of Harris and a correlation between UT’s ball movement and an inability to grab timely offensive rebounds. Aston also felt that the Longhorns let an opportunity slip away in the third quarter.

Texas led by as many as seven points after halftime but failed to capitalize on Kansas State’s stalled offense. During one stretch, UT made five straight defensive stops but scored only twice on the other end. At the end of the quarter, Texas was clinging to a 47-45 lead.

“We just didn’t convert,” Aston said. “I thought that allowed them to hang in there. Once we did that, it was a dogfight, and then they ending up making more shots than we did.”

During a 71-63 loss to Texas in Manhattan on Jan. 19, Kansas State gave up 11 3-pointers while using a zone defense. The Wildcats went with a man-to-man scheme in Saturday’s rematch. Texas shot 36.2% from the field and missed 14 of 15 deep tries.

“We’ve grown as a man-to-man team over the course of the year, so part of that was just our growth and our ability to play it more,” Kansas State coach Jeff Mittie said. “I told the team I thought we’d play about 10 to 15 possessions of zone. We really were guarding so well all day that we really just stuck with the man.”