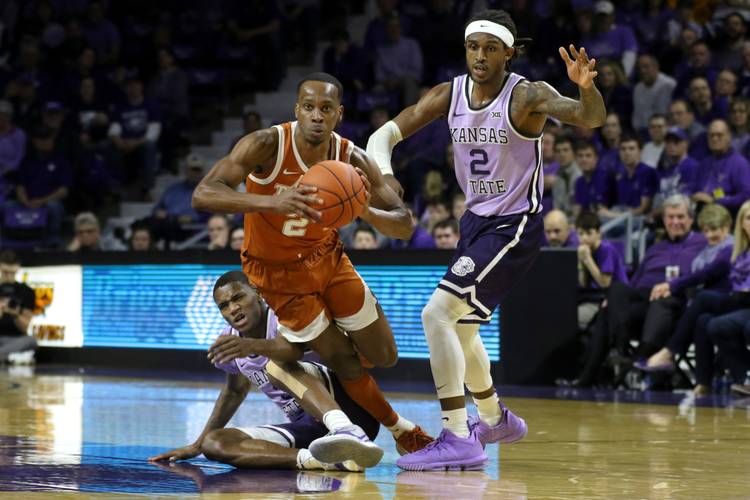 Texas used a 13-point surge late in the first half to take control, and the Wildcats were unable to mount a serious challenge the rest of the way as they dropped their seventh straight 70-59.

In 2000, K-State endured an 11-game skid in what not coincidentally was coach Tom Asbury’s final season.

Against Texas (16-11, 6-8), the Wildcats seemingly weathered one first-half storm, trimming a 10-point deficit to six at 26-20 on Xavier Sneed’s two free throws with 6 minutes, 48 seconds left in the period. But the Longhorns scored the next 13 points to lead 39-20 on Courtney Ramey’s basket and took a 42-23 advantage to halftime.

Ramey led all scorers with 26 points for Texas, including 21 in the first half. The Longhorns cooled off after shooting 62.5% in the opening period but still finished at 52.3%.

Texas also got 12 points each from Andrew Jones and Matt Coleman III.

For K-State, which scored the last four points of the game, Sneed was the leading scorer with 15 points and Makol Mawien had 14. Cartier Diarra and David Sloan finished with nine points each but combined for just three points in the second half.

Mawien led the Wildcats to a 41-28 rebounding advantage with 10.

K-State had a chance to make a move early in the second half when, after Donovan Williams’ 3-pointer put Texas up 49-29, the Longhorns turned the ball over four straight times and followed with missed shots on the next two possessions. But the Wildcats only trimmed five points off the deficit during the stretch, closing to 49-34 on Sneed’s two foul shots at the 13:07 mark.

Ramey’s 21 first-half points came on 8-of-11 shooting with three 3-pointers. K-State’s most effective offense was guards Diarra and Sloan attacking the basket as Diarra finished the half with nine points and Sloan six.