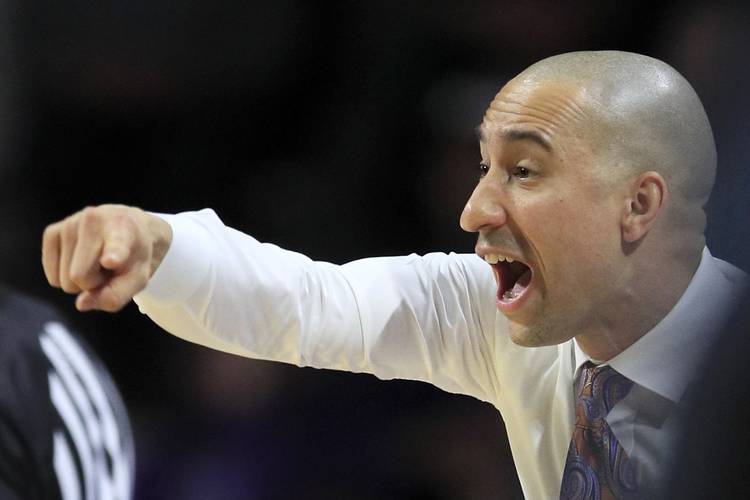 “Today we asked them to play with grit,” Texas coach Smart said after the win over Kansas State. “It’s hard to come in here and win if you don’t have a level of grit to you." (AP Photo/Orlin Wagner)

Most Texas fans have moved on to baseball and softball as everyone waits for spring football to begin. But Shaka Smart’s Longhorns quietly regrouped last week with two victories that few noticed.

Texas snapped a four-game losing streak by beating TCU at home in front of about 4,200 people in the 16,000-seat Erwin Center. Then UT built on that by cruising past Kansas State 70-59 at Bramlage Coliseum.

Now, with two weeks left in the regular season, Texas (16-11, 6-8 Big 12) is one of three teams tied for fifth in the league standings. The NCAA Tournament is not a lost cause, but UT desperately needs a home win Monday over No. 17 West Virginia.

It’s a reminder: Texas absolutely still controls its own destiny.

The Mountaineers (19-8, 7-7) have lost five straight Big 12 road games. Yet this is the same club that embarrassed the Horns in Morgantown in January, winning by 38 points in the biggest blowout in Smart’s tenure.

“I just think our team spirit is at a high right now,” guard Courtney Ramey told reporters after Saturday’s win. “A lot of people are counting us out because we’ve got a lot of injuries, but we believe in each one of our players.”

Nobody inside Cooley Pavilion is more optimistic than the 6-foot-3 sophomore from St. Louis. He kept his spirit up after frustrating road losses to Providence, Kansas and West Virginia.

“We’re all Division I athletes, and we know we have a great chance of doing what we want to do at the end of the year,” Ramey said. “We’re just going to keep attacking.”

Make no mistake, the Longhorns have serious work ahead if they are to have any shot at making the NCAAs.

Right now, Texas isn’t a bubble team; it’s not even among ESPN’s last eight teams left out. If the season ended today, Texas would get almost no consideration from the selection committee.

That said, Texas would raise its profile with wins over West Virginia and then Texas Tech on Saturday in Lubbock. If that happened, the final two regular-season games — at Oklahoma (March 3) and Oklahoma State (March 7) — would look winnable.

A 4-0 finish over these next four games would give Texas a 10-8 Big 12 regular-season mark. Then, if the Horns get at least one win at the conference tournament, they’d probably be NCAA-bound.

Granted, it’s an optimistic viewpoint. This program hasn’t shown the consistency the past four seasons to indicate it could pull off that kind of finish. Under Smart, Texas has meandered between wins and losses, oftentimes winning and losing close games with no rhyme or reason.

A 2-2 mark or worse over the final four would seal yet another NIT berth. That’s likely to trigger a coaching change.

Had Texas played a stronger nonconference schedule, a 9-9 league mark plus one win in the Big 12 Tournament might be enough for the NCAAs. But the Horns played weaker opponents in a gambit to rack up victories in the hope it would propel the team into Big 12 play.

As of Sunday, Texas sat 68th in Kenpom’s Division I analytical rankings. Complicating matters is the Longhorns don’t have the right kind of Big 12 wins. Texas went 0-4 against Kansas and Baylor, the league’s two front-runners.

That brings extra importance to this week’s WVU and Tech games. The Mountaineers rank seventh, according to Kenpom; Tech is 14th.

The Horns could accomplish anything by playing with the same determination they showed against the Wildcats. Ramey had a career-high 26 points while Matt Coleman III bounced back from a heel injury to score 12.

“Today we asked them to play with grit,” Smart said afterward. “It’s hard to come in here and win if you don’t have a level of grit to you. Courtney did a great job setting the tone with that, and our other guys did a great job as well.”