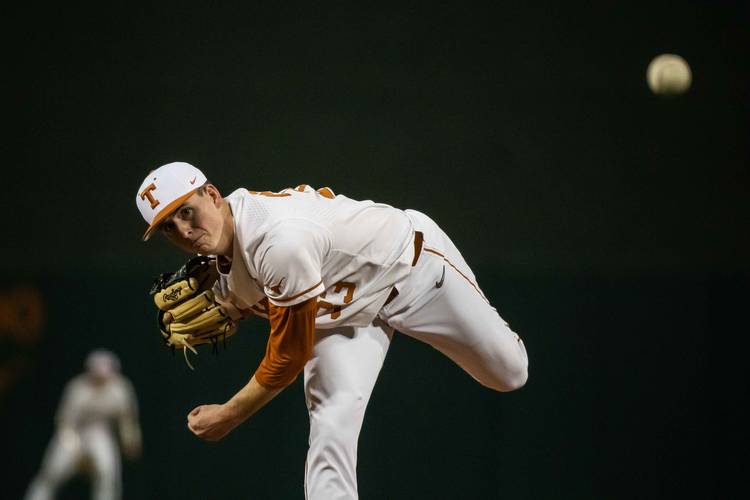 In his first collegiate start, Hansen struck out six and allowed two hits over five innings in a 4-1 win over Sam Houston State at UFCU Disch-Falk Field. The Longhorns are the Big 12’s last unbeaten team.

UT outfielder Eric Kennedy called Sam Houston State (5-2) the “best team we’ve played.” That distinction won’t last long, however. Next up for Texas (9-0) is a trip to Houston for the Shriners Hospitals for Children College Classic. The Longhorns will play No. 6 Arkansas (7-0), No. 11 LSU (5-3) and Missouri (4-3) at Minute Maid Park.

“This is going to be some of the best teams in college baseball this weekend,” Kennedy said. “It’s good to go in there playing well as a team.”

Texas trailed early on Tuesday as a first-inning error by center fielder Duke Ellis led to Sam Houston State’s only run. Four Bearkats reached base in the opening frame, but Hansen settled in afterward. He retired all 12 of the batters he faced in the second, third, fourth and fifth innings, including six strikeouts.

“I definitely felt I had control with my slider. It’s kind of been my go-to pitch all year,” Hansen said. “I just knew I had to trust my pitches and hitters are going to get themselves out if I just throw strikes.”

A contender for a spot in UT’s weekend rotation until he was slowed by a preseason case of mononucleosis, Hansen had made two relief appearances over the first eight games. On Tuesday night he was working with a pitch count of 60-70 pitches. He threw 70.

“He’s probably pretty close to 100%,” UT coach David Pierce said. “It’s been awhile now, but he hasn’t had to push his endurance yet. That’s still something that’s going to come.”

Hansen committed to Texas in 2017, but Pierce revealed last week that his journey to Austin involved a tip on Twitter. Hansen hails from California and Pierce had seen him on the recruiting trail. But Texas took a closer look after it received a direct message that questioned why a pitcher who wanted to play at Texas wasn’t being heavily recruited by the school.

Hansen said he had been receiving scholarship offers from other schools at the time. Texas, though, had long been his dream school. He credited the father of a teammate on his travel ball team for sending that message.

“I’m in such a rare story, but it just worked out,” Hansen said.

Sam Houston State’s junior southpaw Jack Rogers matched Hansen for part of the night. He shut down the Longhorns over the first four frames, but to lead off the fifth, Kennedy and Silas Ardoin singled and forced a pitching change.

Texas exited the fifth with a 4-1 lead. The first run was scored on a fielder’s choice. Austin Todd and Zach Zubia then drove in three more runs with a pair of hits.

Around the bases: Freshman Andre Duplantier II became the third Longhorn to earn a save this year. … A member of the Big 12’s all-preseason team, Kennedy recorded his first multi-hit game of his sophomore season. … Lake Travis graduate Landon Ausley had three strikeouts and three walks during his inning out of Sam Houston State’s bullpen. … After a successful swipe, Ellis is 4-for-4 on steals. He was 17-for-17 last season.