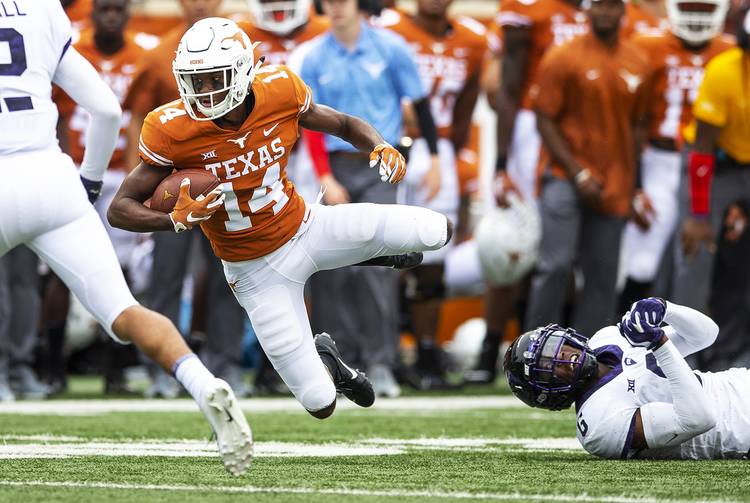 Texas wide receiver Joshua Moore pleaded no contest Wednesday to a misdemeanor weapons charge and is expected to be with the team for spring practices after serving a year-long suspension from participating in games last season.

Moore, 20, entered the plea to County Court-at-Law Judge Nancy Hohengarten after reaching an agreement with Travis County prosecutors to avoid jail time. The deferred adjudication agreement states Hohengarten will not enter a guilty finding if Moore stays out of further legal trouble over the next year, completes 60 hours of community service and fulfills any counseling conditions the probation department recommends.

“Josh has remained on the team but was suspended last season from participating in games, pending the completion of the legal process,” a team spokesman said Thursday. “He is still currently a member of the team.”

The team has not decided if Moore will be able to play in games in the 2020 season, the spokesman added.

Moore was arrested at gunpoint on July 5 in downtown Austin after police say they saw him chamber a round in a 9 mm pistol that he had removed from his waistband. Moore’s actions were captured on a camera that police monitor in real time to spot criminal activity in the downtown entertainment district, according to his arrest affidavit.

When officers searched him, they found the gun in his waistband containing a 30 round magazine with a live round.

Moore, who did not have a permit to carry the weapon, was taken into custody and released on bond. He was charged with unlawful carrying of a weapon, a Class A misdemeanor — the charge to which he pleaded no contest.

“He hasn’t had any problems whatsoever,” he said.

Prosecutor Corby Holcomb said Moore loaded the gun after an apparent altercation between two groups of people. Moore, per the conditions of the plea agreement, must forfeit the gun and pay a $200 fine. His arrest can be sealed after he completes probation.

“For someone with no prior criminal history where no one was injured, this was a pretty standard recommendation,” said Holcomb, the assistant trial director for the county attorney’s office.

Moore, of Yoakum, last played for the Longhorns in the 2018 season before a shoulder injury sidelined him after six games. He had seven catches for 53 yards, including a 27-yard touchdown against USC.

A former top-100 recruit, Moore could be in line for an expansive role under new offensive coordinator Mike Yurcich following the departures of senior wideouts Devin Duvernay and Collin Johnson.

The Dotted Line: Ranking the recruiting importance of each defensive position for Texas

12 big things about Big 12 basketball: KU rises to No.1 but Baylor is still good; Huge week for Texas Tech