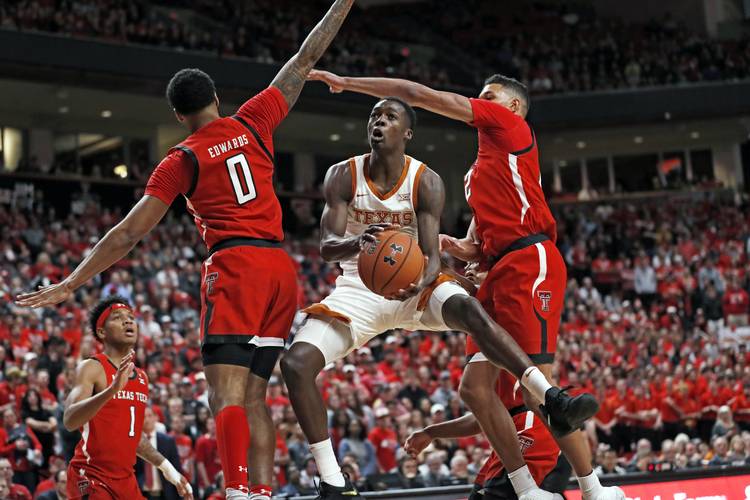 Texas' Andrew Jones (1) lays the ball up between Texas Tech's Kyler Edwards (0) and TJ Holyfield (22) during the first half of an NCAA college basketball game Saturday, Feb. 29, 2020, in Lubbock, Texas. (AP Photo/Brad Tollefson)

LUBBOCK — For the first time in ages, Texas looked like Texas.

The aggressiveness, the shot-making, the defense, the rebounding, the coaching, the energy. It was all on display Saturday in a pulse-pounding 68-58 win over No. 22 Texas Tech.

“Shaka!” Tech coach Chris Beard called out to his Texas counterpart in the hallway afterward. He gave the winner a thumbs up.

Horns up, for sure. A team that could have easily rolled over and died with a 4-8 conference record is now on a four-game blitz that could end with a NCAA Tournament ticket.

Texas (18-11, 8-8 Big 12) is now back to .500 in league play with two regular-season games left. Next comes Tuesday’s road trip to Oklahoma, followed by next Saturday’s home game against Oklahoma State.

“We going to do our best,” guard Andrew Jones said. “We’re going to keep playing these next couple of games, keep fighting. Hopefully string some more games together.”

Jones showed no fear against Tech, tying his career high with 22 points. In the last four games, the 6-4 guard has scored 21, 12, 22 and 22 points, tying or setting new career highs three times along the way.

Courtney Ramey hit some off-balance, daredevil jumpers and finished with 12 points. Will Baker and Brock Cunningham, the dynamic duo from Westlake, even went a combined 3-for-4 from 3-point range.

But Texas doesn’t win this game without Royce Hamm Jr.’s muscle and hustle. He had nine points, six rebounds and an incredible put-back with 50 seconds left that gave UT a four-point lead.

“My focus was on just going out, playing hard,” Hamm said. “We knew Tech was a good opponent and we wanted to come out and fight.”

He’s had better games statistically, but was this the junior’s best overall game at Texas? “I would say so. It’s the best feeling,” Hamm said.

To which Jones quickly added, “So far.”

Nobody felt better afterward than Smart, who likely knows it’s NCAA or else this season. Those around him continue to insist he hasn’t changed his style or demeanor, but your eyes tell a vastly different story.

Smart screamed with excitement after two Tech shot clock violations. He did a Tiger Woods-style fist pump at one point. Officials gave him a warning midway through the first half to calm down. But then he got a technical with 2:45 before halftime anyway.

This normally cool customer is on full tilt. It was Smart’s second technical foul this week and fourth in five seasons at Texas.

Asked point-blank if he’s coaching to save his job, Shaka laughed and said: “I’m coaching to win the game, man. What’s happened is because of the guys we have out (injured), there’s a lot less time or energy spent on who should we play.”

Saturday was Smart’s first win in five trips to Lubbock. Texas now has back-to-back wins over Top 25 opponents for the first time since the 2013-14 season.

“We get in these situations in life where everyone has an opinion on what should happen, what might happen,” Smart said. “That’s out of my control. I have the good fortunate of coaching this team at the University of Texas Today we played at 11 o’clock against Texas Tech, and as a staff, we said we’re going to put 1,000% of our energy into winning this game.”

Injuries were a problem again. Donovan Williams has been battling left knee problems for weeks and couldn’t go on after halftime. He had four points and two rebounds in 13 minutes. Down another player, it only made the final tally more impressive.

The Horns attacked, something Smart has been begging them to do at times. They were 10 for 14 at the free throw line.

They went after every loose ball. Texas won the rebounding edge 30-23. Cunningham had five boards himself, hit the deck once chasing a ball out of bounds and fouled only twice in 22 minutes.

Playing in front of his grandmother, who doesn’t make the drive to Austin, must’ve been motivational. Cunningham said he needed 16 tickets for the game.

“Once we got a feel for the game and our guys stared to gain confidence through shots, defense and rebounding,” Cunningham said, “it was just a snowball effect for the rest of the game and we kept it through the second half.”

As a team, Texas didn’t get into foul trouble, either. No Longhorn had more than three fouls, a rather impressive total in a rather aggressive game where some of the best calls were no-calls.

Four Tech players finished in double figures as Jahmi’us Ramsey led the way with 13. But the Raiders (18-11, 9-7) didn’t score a single point off fast breaks and turned it over 16 times.

The thundering, sold-out crowd of 15,098 at United Supermarkets Arena was stunned at times.

“My tune hasn’t changed. I’ve been consistent,” Beard said. “Told you guys they’re one of the hottest teams in college basketball right now. And, today, that proved to be true again.”