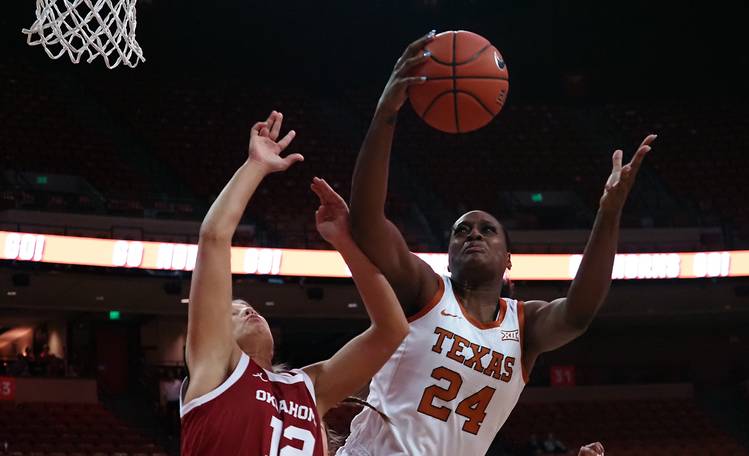 Earlier this week, Texas freshman guard Celeste Taylor was asked about the rivalries that she grew up around.

A native New Yorker, Taylor had held UConn and Notre Dame up as the textbook definition of on-court animosity. A close second, Taylor insisted, was whenever she and Long Island Lutheran played Christ the King.

Taylor, though, is quickly learning about that Red River Rivalry. And on Saturday night, her 27-point outburst paced the Longhorns in an 86-76 win over Oklahoma at the Erwin Center. The 10-point victory closed out a successful week in which Texas (18-10, 10-6 Big 12) also upended No. 25 TCU in Fort Worth.

“It’s really exciting for us because we want to peak at the right time,” Taylor said. “I think right now we’re doing pretty well at peaking at that moment. I think just from here on out, we know what we need to do and we know how much we have to give.”

Saturday’s first half featured a plethora of whistles and foul troubles for the leading scorers of both teams. Oklahoma’s Taylor Robertson had five points and three fouls in under nine minutes of action. Texas forward Charli Collier went to the bench after her second foul was called with 8:09 left in the second quarter.

With Collier out, Texas turned to Taylor.  The freshman scored 10 points in the second quarter as Texas rallied from a four-point deficit. Behind Taylor and a defense that held Oklahoma to a 2-for-16 shooting performance, Texas took a 39-31 lead into the intermission.

“The second quarter did us in,” Oklahoma coach Sherri Coale said.

Texas dished out three assists in the second quarter. Both Collier and Taylor, however, thought that UT coach Karen Aston should have been credited with an unintentional dime.

Less than three minutes into the second quarter, UT senior Jada Underwood needed to be helped off the court after hitting the floor on an offensive possession. To add insult to injury, Underwood was called for a charge. After Underwood exited, Aston continued to argue the call and was assessed a technical.

Oklahoma (12-16, 5-11) went up 28-25 after making the two free throws tied to Aston’s first technical of the season. Fourteen of the first half’s remaining 17 points were then scored by Texas.

“I kind of liked the tech that Coach got. It got me hyped up, it got everybody hyped up,” Collier said. “It really just made us just play better. Honestly, I think it made us play through the calls and it made us play tougher.”

Added Taylor: “She always talks about having a dog. I think we see the dog in her, so it kind of helped us get that dog out of us.”

Texas expanded its lead in the second half and a late run failed to get Oklahoma any closer than eight points. In perhaps her final game against the Sooners, UT senior Joyner Holmes finished with 16 points. But the night belonged to Taylor.

Three days after scoring a career-high 22 points at TCU, Taylor fell one point shy of Collier’s season-high for a Texas player. Taylor made nine of her 14 shots and knocked down four 3-pointers.

Taylor was also tasked with defending Robertson for part of the night.  The nation’s leading 3-point shooter, Robertson was averaging 19.4 points per game. On Saturday, she scored 10 points and made just two shots from deep.

Coale was quick to point out that Robertson played 13 fewer minutes than her season average. Robertson still mustered only six shots. Texas shadowed the 5-7 Robertson with the 5-11 Taylor and the six-foot Underwood throughout the game.

“Their connection, speaking of Celeste and Jada, is really good because at times they’re guarding someone’s best perimeter player and someone’s best small forward and they’re able to switch some screens,” Aston said. “Our team defense was better after the first quarter.”

With the victory, Texas created some space in the Big 12 standings. UT remained in third place but now leads Iowa State and Kansas State by two games. Kansas State was beaten by Baylor on Saturday while Iowa State held off West Virginia.

Texas has two games left on its regular-season schedule. The Longhorns will travel to Baylor next Thursday before hosting Oklahoma State on Sunday.

Notes: Oklahoma’s Madi Williams and Gabby Gregory combined for 46 points. Robertson did increase her single-season 3-pointer total to 123, which is the Big 12’s new record. … With 14 points and 12 rebounds, Collier recorded her 15th double-double performance of the season. … Former UT star Ariel Atkins spoke to the Longhorns at their shoot-around and was honored during the first quarter. Atkins, who scored 1,497 points from 2014-18, won a WNBA championship this past season with the Washington Mystics. … Texas sat freshman Isabel Palmer after the reserve guard felt discomfort in her left foot during warmups. …