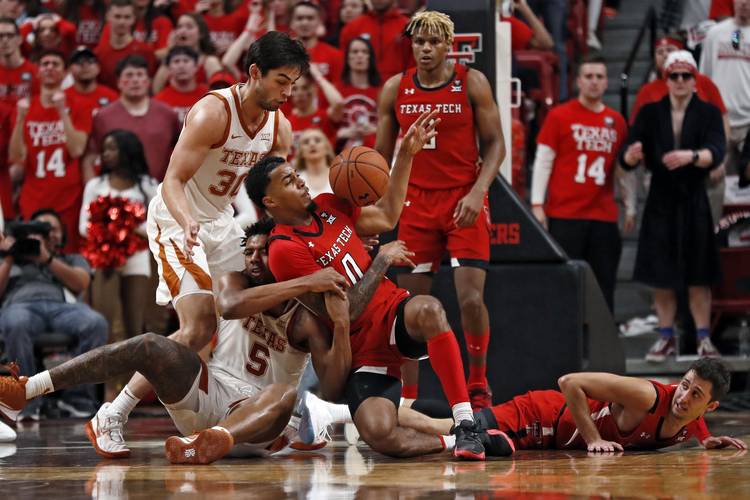 Texas' Royce Hamm Jr. (5) and Texas Tech's Kyler Edwards (0) fight for control of the ball during the second half of an NCAA college basketball game Saturday, Feb. 29, 2020, in Lubbock, Texas. (AP Photo/Brad Tollefson)

TCU’s Jamie Dixon looked at the stat sheet and couldn’t believe how freshman Will Baker hit four 3-pointers. “If you’re a numbers guy or a gambler — what you’d say? He was 1-for-21?” he said.

Texas Tech’s Chris Beard tipped his cap but noted, “A couple of guys today were hitting 3-point shots that maybe hadn’t hit one all season.”

Then, Beard added, “We take their best punch and they knocked us out with it.”

There’s clearly some hidden benefit from all of Texas’ injuries. Opponents have no idea what to expect without three injured starters — Jericho Sims, Jase Febres and Gerald Liddell. A fourth player, Donovan Williams, is now sidelined with a left knee problem.

Oklahoma is next on the docket on Tuesday in Norman. Now in his 34th season, OU coach Lon Kruger has seen it all, so he’s likely ready for anything. Still, Texas’ Shaka Smart has the element of surprise working for him and the Horns.

“Trust me, if it was up to me, if I could choose to have a fully healthy team, I would want those guys to be available to play,” Smart said Monday. “But give the guys that are playing a ton of credit from the standpoint of playing aggressive, confident, loose basketball.”

Tuesday’s game is pivotal for both teams. Texas and OU have matching records. Both teams are 18-11 overall, 8-8 in league play and tied for fourth place in the Big 12 standings.

The top six teams all receive a first-round bye and automatic entry into the Big 12 tournament quarterfinals. The No. 4 and No. 5 seeds play each other at 11:30 a.m. on March 12, so it’s possible the Horns and Sooners could meet again in Kansas City.

Tuesday’s winner solidifies its NCAA Tournament hopes. The loser likely isn’t out, but it would shift that team to the wrong side of the bubble.

“I told the guys yesterday, if they’re not making projections about you or any predictions about you, then that means you probably having a really bad year,” Smart said.

Good luck trying to project how this season plays out for Texas. A team that was left for dead with a 4-8 league record is now surging, having won back-to-back games against Top 25 opponents for the first time since the 2013-14 season. This team’s injury situation has dramatically changed how an opposing coach would structure a defensive game plan.

Instead of Sims, who averaged 9.7 points and 8.2 rebounds, teams are dealing with Royce Hamm Jr. and Kai Jones in the middle.

Prior to this four-game stretch, there wasn’t much tape of Hamm playing extended minutes. When Big 12 play began in January, he logged three minutes against Kansas State and Oklahoma State and did not play at all against Kansas.

Now, Hamm has played 32, 20 and 29 minutes in the last three games and is showing his phenomenal athleticism at times. Same goes for Kai Jones. He’s logged at least 25 minutes in three of the last five games in a defense and rebounding role.

Baker got himself in foul trouble against Tech, but he’s going to get plenty of chances in every game going forward. So will Cunningham, a grinding machine of a rebounder.

“I guess one advantage of having a shorter rotation is those guys know that they can play and attack and be confident,” Smart said. “If they make a mistake, there’s not really a ton of options to take them out.”

What’s interesting is none of those front-line players have to carry the scoring load. Guards Andrew Jones, Courtney Ramey and Matt Coleman III can handle that.

Andrew Jones, the player most expected would be a supporting cast member, poured in 22 points against West Virginia. Then, he did it again against Texas Tech. Jones was named the co-Big 12 player of the week on Monday along with TCU’s Desmond Bane.

Coleman has taken on more defensive assignments with Ramey becoming a primary ball-handler.

Ramey had a career-high 26 points against Kansas State during this winning streak and then had 21 against West Virginia. He dropped back to 12 points against Tech but made a eye-popping, off-balance 3-pointer that gave Texas a seven-point lead late.

None of this is how Smart envisioned it last summer or fall. But this is the Longhorns’ reality now.

“If you go in there with anything other than a level of confidence and belief, unwavering connectivity,” Smart said, “then it’s going to be a tough, tough day.”

The Dotted Line: Ranking updates on Texas’ 2021 commits include a new five-star