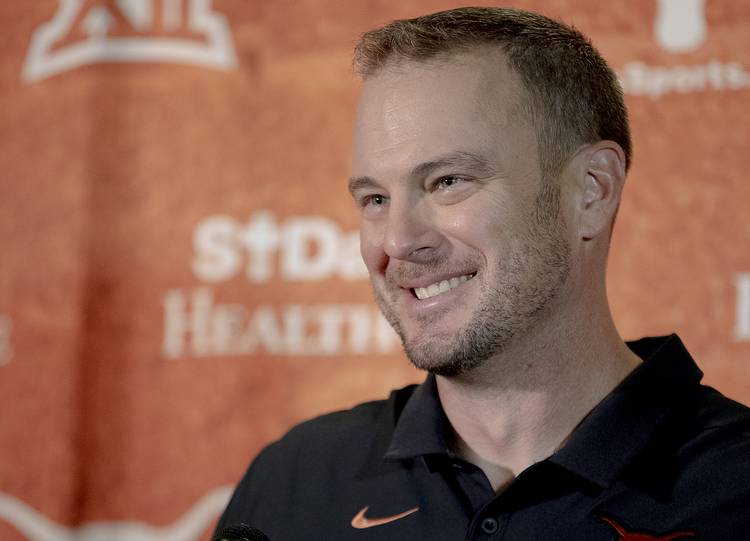 The dead period is over. Texas coaches can contact potential recruits throughout March leading into the spring evaluation period of April. In short, business is about to pick up for Longhorns recruiting.

Texas has six commitments for the 2021 class, which ranks seventh in the nation and first in the Big 12.

Ja’Tavion Sanders, a five-star athlete from Denton Ryan, is the last commitment Texas has gotten, and that was back in early September. The Longhorns lost the pledges from Dallas Skyline wide receiver Quay Davis during the season and from Lake Travis tight end Lake McRee in February.

The Longhorns hope the 2021 class becomes the fourth consecutive top-10 class signed by Tom Herman. But Texas must answer a few questions before achieving that goal:

1. After going 8-5, can Texas sign the elite in-state talent?

The modern recruit narrows down his schools, and eventually commits, before his senior season. That’s the new reality due to the early signing period and the ability to take official visits in the spring and summer prior to a recruit’s senior year. It’s made the previous season more important to the recruits than the current one because a decent chunk of the class is constructed before the season opener.

Texas feels far removed from the Sugar Bowl win over Georgia. Herman and his new assistants are competing against Oklahoma and the SEC powers for the state’s top recruits. Texas A&M’s move to the SEC has allowed the likes of Alabama and Florida a bigger recruiting footprint within the state.

Players want to win. Texas hasn’t been a national player since Mack Brown was coaching the Longhorns. Convincing the state’s elite prospects to commit to a project without a known outcome rather than going to Oklahoma, Ohio State or the SEC becomes a harder sell the longer Herman is around without real, consistent success. Texas must eventually sell reality instead of a vision.

2. What are the most important positions for Texas in 2021?

Coaches say the offensive and defensive lines are always important, and that is also true for Texas in 2021 despite having signed strong groups of players at both position groups last cycle. Texas is loaded with potential at defensive tackle, but still needs to add pass rushers to prepare for life after Joseph Ossai. The Longhorns need edge rushers and are off to a strong start if Sanders winds up at defensive end.

Offensive line is the most bountiful position in the state for this cycle with a handful of potential five-star recruits. Arguably the best of the bunch, four-star guard Donovan Jackson is pledged to Ohio State. Texas owns a pledge from four-star tackle Hayden Conner. Adding big names to that list is imperative for the Longhorns because of the sheer amount of talent in the state.

The Longhorns also need to add wide receivers and cornerbacks. Texas signed only one cornerback and one outside receiver in 2020. Many of the presumptive starters for the 2020 season at receiver and cornerback will be seniors by the time the players from the 2021 class arrive on campus.

3. Who are the can’t-miss prospects?

Texas must sign three talented offensive linemen to claim a victory in the 2021 cycle. The Brockermeyer brothers of Fort Worth All Saints, Tommy and James, lead the way. The twin sons of former UT offensive lineman Blake Brockermeyer, they are Texas’ top targets at offensive tackle and center. Tommy is a five-star tackle, while James projects to center. The brothers hold offers from the nation’s top programs, so it isn’t a lock that Texas signs them. Alabama and Clemson are in the mix.

Bryce Foster, a four-star guard and Conner’s teammate at Katy Taylor, is Texas’ top target on the interior of the line. Foster is a big, strong player who also excels at discus.

Defensively, the Longhorns need to land a big-time talent at defensive end and are pursuing Landon Jackson from Texarkana Pleasant Grove. The 6-6, 240-pound four-star is a wanted man, owning 27 offers from programs across the country. Texas A&M and LSU are heavily in the mix. He plans to take an official visit to Texas this summer.

Texas’ top target at running back is LJ Johnson, a four-star from Houston Cypress-Fairbanks.

The name to know at linebacker is Terrence Cooks, a three-star from Alvin Shadow Creek, which is the same school that produced 2020 signee Xavion Alford.

The Longhorns are still figuring out their top targets in the secondary, while Davis, a former commit at wide receiver, remains the best receiver in the state and is still on Texas’ radar.

The Dotted Line: Predicting the destinations of the top uncommitted prospects in Texas