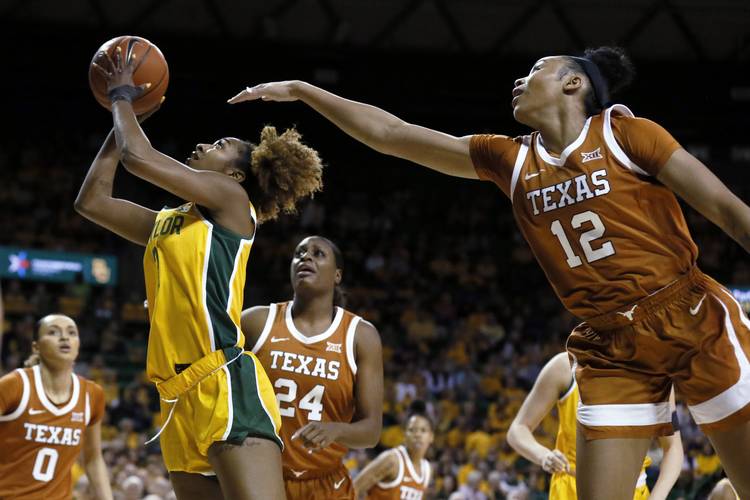 On Thursday night, only five of those minutes were needed at Baylor’s Ferrell Center to remind an announced crowd of 9,336 of Baylor’s and Texas’ respective places in the Big 12. Supported by a strong start, the second-ranked Bears rolled to a 69-53 win, never trailing on their way to their 58th straight conference win.

“We have to move forward,” UT coach Karen Aston said. “What you don’t want to do at this point in your season is to let a loss devastate you, and you’re not ready to play in your next game or you’re not trying to move forward and get ready for tournament play, which is right around the corner.”

Baylor (28-1, 17-0) jumped out to a 15-4 lead in the first five minutes of the game, as four of its five starters all scored and the Lady Bears didn’t attempt a single 3-pointer. Texas had three turnovers and five missed shots.

“It was tough coming back from that,” Texas guard Sug Sutton said of the early deficit. “We just had to come together as a team and pick each other up. We (weren’t) hitting shots, so we just had to stick to our defensive plan.”

Even when things went wrong for Baylor, they didn’t go right for Texas. With the Lady Bears up 8-4, NaLyssa Smith missed her shot. Both Charli Collier and Celeste Taylor went for an uncontested rebound, but the ball bounced off them and out of bounds. Three seconds later, a Lauren Cox jumper made good on Baylor’s second chance.

In their first game five weeks ago, Texas held Baylor to only 11 first-quarter points in Austin. And the Lady Bears led only by five, 29-24, at halftime. But they went on to a 64-44 win.

Thursday night, however, Baylor led 24-10 after the first quarter and 34-20 at the break. After holding a Senior Night ceremony during halftime, the Lady Bears never let Texas get any closer than nine points over the final two quarters.

Junior reserve Audrey Warren’s 10 points made her Texas’ leading scorer for the first time this season. Joyner Holmes was next with nine points, but the senior shot 4-for-18.

Aston diagnosed that her team had played better than it did against Baylor in January, and Mulkey praised the physicality of UT’s defense. Texas ended up with two more 3-pointers and won the turnover battle by a 21-19 margin. But the Longhorns ended up making just 20 of their 63 shots.

“If you look at today, for example, I don’t think the score is necessary indicative of how we played tonight, but I understand that’s what everyone’s going to look at,” Aston said. “They have, I think, a lot of depth in the paint in particular and that’s something we don’t have.”

Texas closes out the regular season on Sunday against Oklahoma State. The Longhorns head into the weekend with a one-game lead over both Iowa State and Kansas State. Unless Texas loses to Oklahoma State and Iowa State upsets Baylor, the Horns will be the Big 12 tournament’s third seed.

“We all have to learn from this loss, take away the positives and the negatives from the game and just turn it around,” Warren said. “(We have to) know what we’re playing for on Sunday. It’s our Senior Night and we want to get a win for them.”

Notes:  Taylor was held to two points. The freshman guard shared the Big 12’s player of the week award with Cox on Monday. … Collier, who is UT’s leading scorer, fouled out after contributing seven points. … Baylor has won 22 of the last 23 games in this series. … The Lady Bears also got a double-double performance out of Smith, who had 13 points and 10 rebounds.