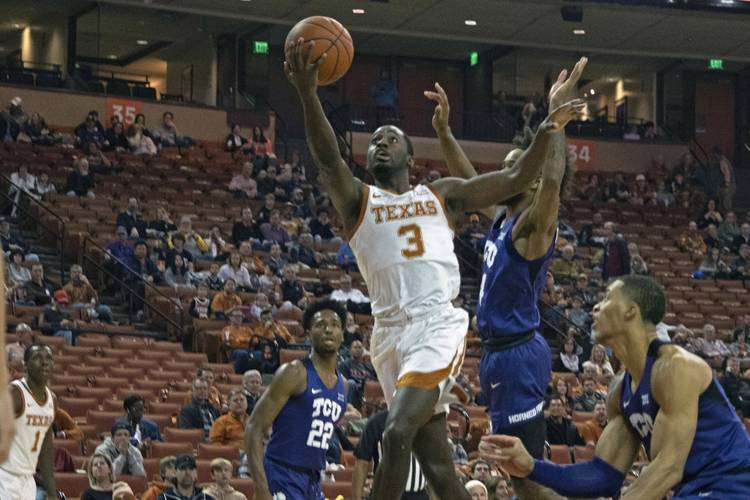 Attendance at Longhorns men’s basketball games dwindled this season down to staggering levels as apathy took root. Fans support winners, and by mid-February, the Horns hadn’t done much winning.

A season-low 3,708 fans had their tickets scanned on Feb. 19 when Texas hosted TCU, according to university figures. Photos of the near-empty, 16,540-seat Erwin Center and student section went viral on social media.

“The Texas fans are the best fans in the nation, but they like winning,” said Texas forward Brock Cunningham, who grew up in Austin. “And when there isn’t winning going on, they’re pretty upset about it.

“But when we are winning,” Cunningham quickly added, “they’re the best fans in the nation. And I feel like we’ll feel that this Saturday against Oklahoma State.”

As it turned out, the 70-56 win over the Horned Frogs was the bottom. Texas (19-11, 9-8 Big 12) has now won five straight. The Horns can finish the regular season in third place, which would be the program’s highest finish in coach Shaka Smart’s five seasons.

The UT athletic department has tried to maximize attendance for the regular-season finale. The ticket office sent blast emails to fans immediately after last weekend’s win over Texas Tech. Saturday’s baseball game was moved to noon so it can finish before the men’s game starts at 3 p.m.

“I’d just encourage everyone to come out and have fun watching our guys have fun playing basketball,” Smart said. “We don’t have any seniors, but it’s a team that’s really fighting for a cause.”

Former coach Rick Barnes always said the Erwin Center had a spectacular, frenzied vibe when it was full. It was rarely full, though, even in Barnes’ best years.

Smart’s team hasn’t played before a truly full house since the Oklahoma game on Feb. 3, 2018. The Horns made the NCAA Tournament that season. But last year, Texas was 8-10 in Big 12 play and hosted NIT games.

It felt sad when only 1,739 showed up for the NIT opener against South Dakota State. Then 3,982 came to see Texas beat Colorado and 3,204 for Xavier.

“Our crowd really makes a huge difference,” Smart said. “To me, the spirit in that building — regardless of the number of the people, the spirit— that’s worth six, eight, 10 points. And we need it.”

College basketball attendance has been trending downward nationwide, and Texas is no different. It’s difficult to get into the Erwin Center on a weekday night with Austin downtown traffic. And fans can easily watch from home as all games are televised.

For years, Texas listed two numbers on men’s basketball box scores. Every game had the tickets distributed and a secondary number was an actual turnstile count. The Longhorns haven’t listed both numbers since the first game of Barnes’ final season in 2014-15.

For that game against North Dakota State, Texas distributed 11,232 tickets. The school reported that 9,132 showed up and had their tickets scanned — a 23% difference.

After that game, the athletic department made an administrative decision to stop reporting actual attendance.

The 2012-13 season is the last year with a complete data set, available on box scores posed on Texas’ website. That season, the Horns distributed an average of 10,186 tickets and had an average of 7,118 get their tickets scanned. That team went 16-18 overall.

First, there were no marquee non-conference home games. The high-water mark of the season was the Texas Tech game (10,290 tickets scanned). Not even Kansas can draw a five-figure crowd anymore (9,566). Oklahoma saw 5,972 tickets scanned.

To the Longhorns’ credit, everyone agrees the team needs to do its part. Under Smart, the program has never been in Big 12 title contention the last five seasons and has yet to win a single NCAA Tournament game.

“We want the fans to come and support us,” guard Andrew Jones said. “That’s the biggest thing, and it comes with winning. We’re going to take care and do our part, come out here and play hard every night.”

The Erwin Center is cavernous. It’s widely agreed that going to a smaller arena in two years will be a huge help. The Moody Center currently under construction is expected to hold about 10,000 for basketball games but can expand to about 15,000 for concerts.

That said, Texas still must put a good product on the floor.

The Horns are down to eight scholarship players after a rash of injuries swept through the team in February. Still, they’ve won five straight and are one of the most dangerous teams in the Big 12 at the moment.

Saturday is the last chance for the fans to come and show their appreciation.

“We’d love to have everybody spend two hours with us at 3 o’clock on Saturday,” Smart said.

No. 2 Baylor 69, Texas 53: After another Bear beating, UT stresses the need ‘to move forward’