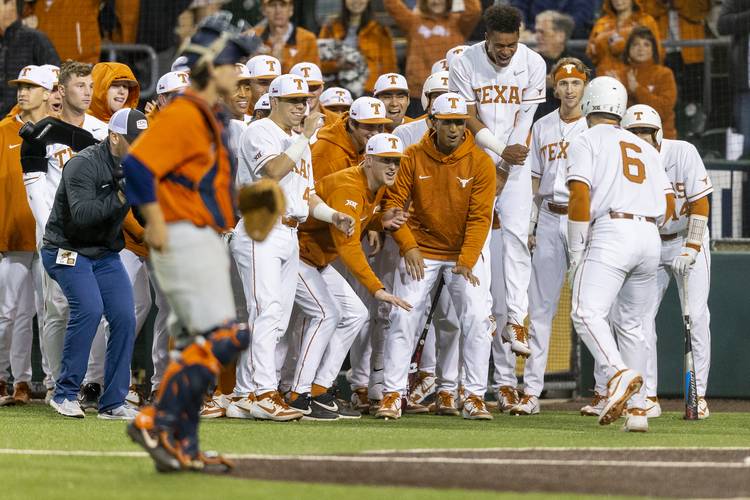 On Friday night, the seventh-inning stretch turned into a surge for the Texas Longhorns.

Six runs scored in the bottom of the seventh inning propelled UT to a 6-1 win over Cal State Fullerton at UFCU Disch-Falk Field. The five-run win was Texas’ 11th victory of the season. It also helped the Longhorns bounce back from rough losses against Missouri and Arizona.

“I thought we played well and swung well (in those losses), but we just didn’t come up with the dubs,” junior second baseman Murphy Stehly said. “It was good to get this one.”

Over the first 13 games of its season, the Texas offense had batted around once. On Friday, the Longhorns (11-3) matched that feat during a seventh inning that Zach Zubia opened with a single and ended with a flyout. In between those at-bats, Texas added five more hits and scored six times while erasing a 1-0 lead for Fullerton.

For Texas, a successful seventh inning was in stark contrast to the team’s first six sessions at the plate. Over Friday’s opening 5.1 innings, Texas was held without a hit by Fullerton starter Tanner Bibee. Following a leadoff walk in the first inning, Bibee strung together a string of 16 straight outs. Strikeouts, however, felled only five of those retirees.

“It was a grind at first,” Petrinsky said. “We put some barrels on some balls early on, had some good (at-bats). Just kind of stick with it and just trust it and that’s what we did.”

Texas recorded all but one of its hits in the seventh inning, but that outlier may be been UT’s biggest knock. With one out in the sixth session, Stehly broke up Bibee’s no-hit bid with a clean single. A transfer from Orange Coast College, Stehly had been scuffling and entered the game with a .160 batting average.

“Anytime there’s a no-hitter going on, you’ve got to get the first one,”  Stehly said. “It was the ice breaker.”

In the weekend-opening triumph, Texas starter Bryce Elder allowed five hits and three walks over 6.2 innings. The junior ace labored in the fifth and seventh innings, but he struck out five and logged his fourth quality start of the season.

Following Elder’s exit, reliever Dawson Merryman was credited with the win. Merryman got Texas out of a two-runner jam in the seventh inning and struck out two of the four batters he faced in the eighth.

Merryman was idle for nearly 45 minutes as Texas took the lead in the seventh inning. But he was still effective upon his return to the mound. Three weeks ago at Rice, Merryman surrendered a two-run homer after he was asked to work a second inning. After that 5-4 win, Texas coach David Pierce thought that Merryman had gotten into his own head while waiting.

“He learned from that, that’s for sure,” Pierce said. “He got caught in the moment and we talked about it. … (He) maintained his composure and did exactly what we needed.”

Texas and Cal State Fullerton last met at the College World Series in 2004, but the programs are forever linked by their histories. Both the Longhorns and Titans were coached by Augie Garrido, who won five national championships at the two schools. Texas placed decals on the bags to commemorate Garrido, who died in 2018.

Around the bases: Texas senior Duke Ellis pushed his successful stolen bases streak to 32. … A single by Kameron Guangorena in the fifth inning drove in the only run for Fullerton (4-10). … Dating back to the 2019 season, Elder has logged eight consecutive quality starts. … Texas announced earlier this week that Saturday’s first pitch had been moved from 2 p.m. to noon. Longhorn sophomore Ty Madden (3-0, 1.71 ERA) will throw against Tanner Luckman (2-0, 1.80).