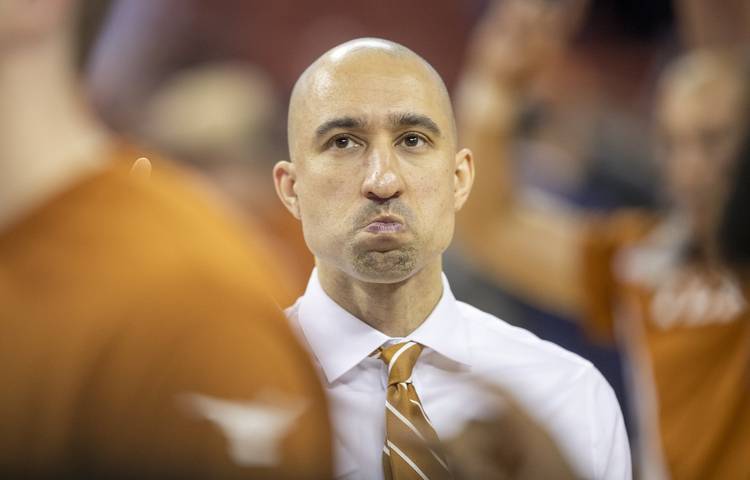 What needs to happen at the Big 12 tournament in Kansas City, which begins Wednesday?

What does the NCAA Tournament selection committee do with Texas?

What does UT athletic director Chris Del Conte do with coach Shaka Smart?

All of these questions have no clear-cut answers after Smart’s club looked plain dreadful Saturday in an 81-59 drubbing at the hands of Oklahoma State, the Big 12’s eighth-place team.

Texas’ five-game winning streak is gone, and so is all the Horns’ momentum. This was a total no-show on a day when the biggest crowd of the season (12,733) crammed into the Erwin Center ready to believe again. Or, they at least came hoping to be impressed.

“Tonight was not us from start to finish,” a downtrodden Matt Coleman III said.

Texas (19-12, 9-9 Big 12) shot 25% in the first half, fell behind by as much as 28 points and slogged to the finish. Everything was getting blown out, including a speaker in the rafters that created a constant, shrill noise until arena folks got it turned off. Fans let out a Bronx cheer.

Oklahoma State (17-14, 7-11) hit a staggering 66% of its shots. It’s the second-best shooting performance by an opponent in Smart’s five seasons. Meanwhile, Texas was 5-for-29 from 3-point range.

“Today, I felt we were the opposite of who we’ve been the last five games,” said Smart, who is now 40-50 in Big 12 play. “We just kept imploring our guys to respond and go win the next round. But you could see on their faces early after (OSU) got up, it’s like they couldn’t believe it was happening.”

As bad as it was, this wasn’t a season-killer. Texas still finished the regular season in a four-way tie for third place. Texas, Texas Tech, Oklahoma and West Virginia all have matching 9-9 league marks. The last 27 teams that finished with a .500 record in Big 12 play all made the NCAAs.

Based on tiebreakers, the Longhorns will be the No. 4 seed at Sprint Center in Kansas City, Mo. Texas will face No. 5 seed Texas Tech at 11:30 a.m. Thursday in the Big 12 quarterfinals.

The Horns went into Saturday sitting 57th in the NCAA’s NET rankings, the new analytical mechanism used to compare teams. This team didn’t have an impressive non-conference schedule, either. A total washout in the Big 12 tournament may bump Texas off the bubble and into the NIT again.

Smart said there are only two types of teams — those who are still playing and those who aren’t. “As long as we’re in that first category, our mentality has to be to help ourselves,” he said. “The only way you do that is by winning.”

Taking into account the last two weeks, this was probably the most anticipated game of the season. The Horns were coming off a big win in Lubbock and a last-second thriller in Norman, Okla. The program had not won at least five straight Big 12 games since 2014.

Things started well enough, but the home team looked tight. Will Baker threw a bad pass to Andrew Jones, and OSU’s Thomas Dziagwa hit a 3-pointer. Jones turned it over, and OSU’s Lindy Waters went and got a dunk. Baker missed a 3-pointer, and OSU’s Isaac Likekele scored on the other end.

The Cowboys were suddenly up 15-3. It was just the start. The pistols came loaded and kept firing.

Dziagwa connected again from downtown and went a perfect 4-for-4 from long range in the first half. Courtney Ramey missed on a bad off-balance jumper, but OSU’s Jonathan Laurent didn’t.

Texas’ final bucket of the first half was a nice run-out dunk by Kai Jones from Andrew Jones. The crowd came buzzing to life. The home team went 0-for-7 to close out the period and went to the locker room down by 21.

This was the same Oklahoma State team that started league play 0-8. Now, the Cowboys have won seven of their last 10.

“We have a lot of guys in our locker room that face adversity really well,” Dziagwa said. “The first half of the Big 12 season, we were not buried. We were planted. Now we’re blossoming at the right time.”

So was Texas, despite having multiple petals pulled off the stem via injuries. Kamaka Hepa briefly went to the locker room in the second half after a hard foul, but he returned. There was just no stopping the Cowboys.

Coleman also had 18 points. But one of the vital cogs in UT’s short-handed lineup is Ramey; he had only four. Baker, Brock Cunningham and Royce Hamm Jr. combined for three points and four rebounds.

“There’s a lot of good things happening here,” Boynton said of Texas. “There was a time two weeks ago where this team was supposed to give up on itself. And it’s hard to keep kids motivated when the noise around them is telling them that they’re no good all the time.”

Right now, the noise is unrelenting. No telling what kind of fan reaction Texas will get in Kansas City at Sprint Center. And there’s no telling what’ll happen if the Horns are bypassed by the NCAA selection committee.

“Today’s a good example of what happens when we’re not the more aggressive team,” Smart said.

As senior year winds down, Texas’ Jada Underwood kept busy as a basketball player and teacher