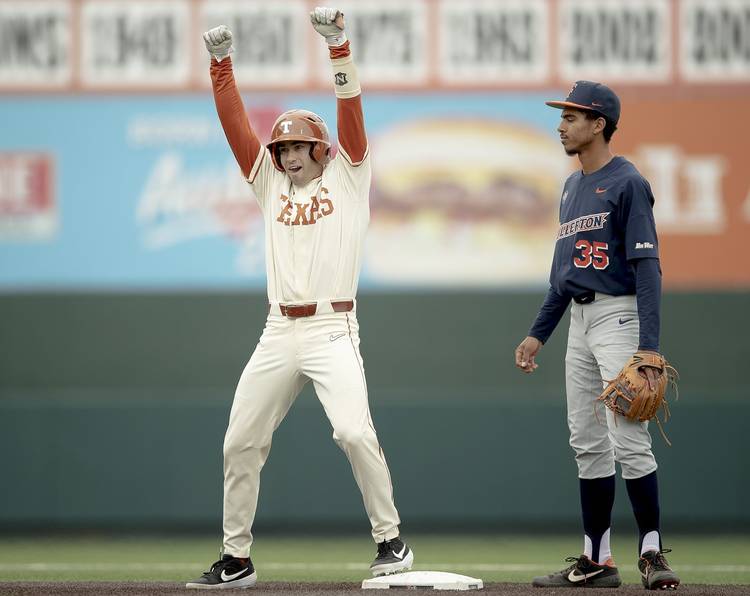 No, Texas isn’t going to win all of its games by 20 runs this season.

In fact, Texas probably won’t take a single one by 20 runs. The Longhorns last blew out an opponent by that many in 2002. Texas, though, is insistent that it will be pretty competitive in games with a closer margin on the scoreboard.

On Saturday, Texas got a chance to prove its point in a 4-3 win over Cal State Fullerton at UFCU Disch-Falk Field. The Longhorns battled back from a 1-0 deficit for the second straight day and improved to 4-2 in one-run games.

“I just think that they’re doing a great job of playing the game and not getting too excited or definitely not panicking, they’re not doing anything that’s creating tension,” UT coach David Pierce said. “They’re just doing a really good job of staying mentally tough and just playing the game.”

Texas (12-3) had nine hits against a Fullerton team that entered this weekend with a 4.39 team ERA. Six of those hits did not leave the infield and Eric Kennedy twice reached on a bunt. The Longhorns pushed across their first run on a second-inning groundout.

But there were some bigger hits. Texas took a lead in the second inning on Murphy Stehly’s two-run double. Fullerton tied the game two innings later, but then Austin Todd  singled home Douglas Hodo III in the sixth.

In a 6-1 win on Friday, Texas was shut out through the first six innings and the Longhorns were held hitless over the first 16 outs.

“Whenever you can jump out and take a lead early, it’s a little more comforting,” Todd said. “But at the same time, you’ve still got to keep your foot on the gas.”

Saturday’s victory was credited to Pete Hansen, a freshman southpaw who allowed two hits over 3.2 innings of relief. He came on in the fifth to relieve starter Ty Madden, who was tagged for six hits and one earned run. Pierce said the sophomore was feeling under the weather and even threw up during the game.

Texas turned to Tristan Stevens and Andre Duplantier II after Hansen. They retired the four batters they faced.

“That’s definitely something we pride ourselves on, is pitching,” Hansen said. “Guys are starting to figure out their roles right now. If we just throw strikes, good things are going to happen.”

A successful effort on the mound came four days after Texas needed nine pitchers to get through a midweek game against Arizona. The Longhorns gave up only four hits and struck out 16 Wildcats but issued eight walks and hit four batters in the 8-6 loss. Pierce said some of those pitchers “went back to work on some mechanical things” and weren’t available over the first two games of this weekend series.

“I just thought the guys that came in today and last night have been really reliable for us and been very consistent,” Pierce said.

As senior year winds down, Texas’ Jada Underwood kept busy as a basketball player and teacher