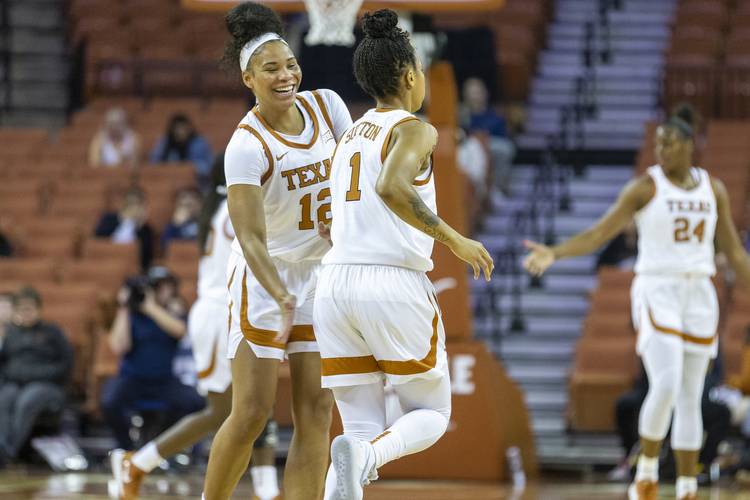 Texas forward Jada Underwood (12) and guard Sug Sutton (1) celebrate during a win over UTSA in Austin on Nov. 14, 2019. [Stephen Spillman for Statesman]

Twenty-three times this season, Jada Underwood has heard her last name called as starters were announced at a Texas basketball game.

Arena announcers in Florida, Hawaii and the Big 12 hot spots have hummed Underwood’s name. It’s been called out after each of her 49 field goals. During this season, “Underwood” has consistently been mentioned during substitutions and trips to the free throw line.

That repetition, however, has not created universal comfort. There is one place where Underwood has not gotten used to hearing her name. Welcome to Austin’s Navarro High, where she is working as a student teacher this school year.

“I know it’s respect, but I feel old when people say ‘Miss Underwood,'” the 21-year-old senior said. “I don’t know if I’ve earned that title yet.”

During her senior year, Underwood has doubled as a versatile defender and a student teacher in U.S. History. She was assigned to the former Lanier High, an inner-city campus with a demographic breakdown that is 87% Hispanic and 7.5% black, through an urban teaching program. Neither Underwood’s high school nor college had such a make-up, but her mother once taught at a predominately black school and she felt like the setting at Navarro was “my fit.”

On days that Texas isn’t traveling or playing, Underwood will teach at Navarro in the morning and practice at Texas in the afternoon. During the summer, she juggled workouts with classes for sixth, seventh and eighth graders that were held on campus.

Underwood does not yet have a 10-year plan, let alone a five-year one. But for at least the next few years, she sees herself in education. That means Sunday’s home finale against Oklahoma State will move her closer to the end of her playing career.

Signed out of Mesquite Horn, Underwood was once one of the few non-McDonald’s All-Americans on the Texas roster. Arriving with a chip on her shoulder — “I never knew I wasn’t good enough,” she said — Underwood averaged around 10 minutes per game her first two years. She made 17 starts last season and has provided the Longhorns with stability and intangibles as a senior.

Underwood has often been tasked with guarding her opponents’ best perimeter player. The Big 12’s three leading scorers — Iowa State’s Ashley Joens, Oklahoma State’s Vivian Gray and Oklahoma’s Taylor Robertson — have all been pestered in their games against Texas by the six-foot Underwood. She’s averaging a modest five points per game, but her season-high 13 were scored in December’s 66-60 win at No. 17 Tennessee.

“Jada personifies the journey that a young woman should take during her time as a student-athlete at Texas,” UT coach Karen Aston said. “Her journey hasn’t always been the smoothest but, as she embarks onto the next phase of her life, I know she will be successful because she learned how to persevere and overcome while she was here.”

Underwood began playing basketball a while ago alongside her twin brother Dimitrius, who is redshirting this season at UT-Dallas. Right now, she insists that her body can’t take another year of the sport. But she would like to transition into coaching.

How would she describe herself as a coach? “I’m a little extra,” Underwood admits. Last summer, she and teammate Joyner Holmes both coached a squad of middle schoolers. At one point during a game, a comment from the opposing bench was overheard and the two Longhorns found themselves jawing at their rival coach.

“I don’t know if we ended up winning or losing,” Holmes said. “We might have lost but we (were) going to go down with a fight regardless. That’s just how we rock.”

Following Sunday’s game, Underwood and Holmes will be honored alongside fellow seniors Sug Sutton, Lashann Higgs and Sophie Taylor. Then it is time for the Big 12 tournament and presumably the NCAA’s postseason showcase. Texas is 18-11 this season, and a 10-7 showing against Big 12 teams has placed UT third in the conference standings.

“I think we’re in a good place,” Underwood said. “It’s a little late in the season, but it’s never too late to be coming into yourself. We’ve got a whole run to make.”

Jada Underwood shares her appreciation for those who have helped her in her journey on the Forty Acres. @jada_underwood | #AllForTexas pic.twitter.com/kqYTrtGEUW

Oklahoma State 81, Texas 59: With a big crowd and high hopes, Longhorns blown out