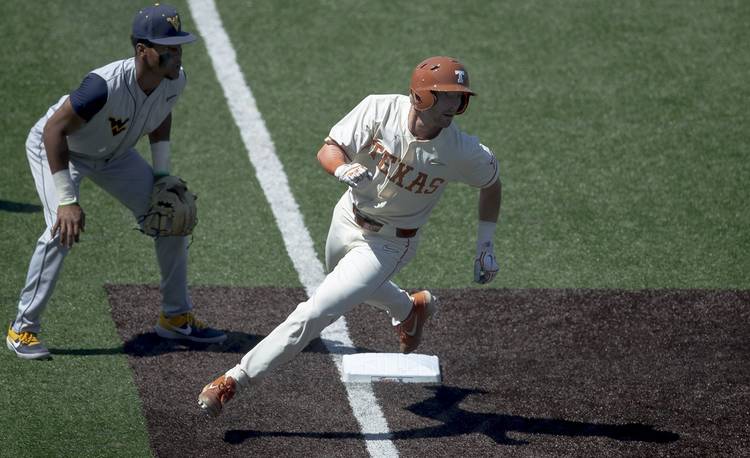 Five days before Sunday’s series finale with Cal State Fullerton, Texas racked up a season-high 11 hits. Those swings, though, went without merit in an 8-6 loss to visiting Arizona.

Texas had no intention of allowing this weekend to yield similar results. The Longhorns (13–3) surpassed their previous benchmark with 12 hits at UFCU Disch-Falk Field in an 8-4 win over the Titans (4–12), adding another series sweep to their résumé after victories Friday and Saturday.

“They came out to fight, to survive today,” UT coach David Pierce said of Cal State Fullerton. “You have to match that emotion and get your guys over some complacency at times when you’re sitting 2–0, knowing that you’ve won the series. But to have the ability to match them mentally is key for us on Sundays. It’s a good sign of us growing up.”

Five Longhorns recorded multihit outings on the afternoon, including right fielder Austin Todd, who sent his first home run ball of the year over the wall in left-center.

Todd’s solo shot regained an early lead for the Longhorns, who put a run on the scoreboard in each of the first four innings. Todd’s three hits elevated his team-high batting average to .368.

Todd was a corner shy of hitting for the cycle, albeit the most challenging one. After the senior’s second-inning homer, he launched another pitch deep toward the 400-foot marker in center. The nearby Titan center fielder ran down the ball after it made contact with the wall to halt Todd at second base.

When teammate and fellow outfielder Eric Kennedy met with reporters after the game, he was asked if he teased Todd about not reaching third base.

Kennedy joked, “What’s up with him only getting a double on that? I mean, he hit it to the wall. He’s got to know he’s slow after that.”

Starting pitcher Coy Cobb threw only 34 pitches as he recorded only four outs. Cobb’s early exit opened the door for a complete effort from the Longhorns’ bullpen. Seven players made an appearance on the mound, with sophomore right-hander Dawson Merryman (3–0, 1.74 ERA) allowing zero hits across four innings. In the three games, Texas put together a combined 1.67 ERA against Cal State Fullerton.

“We’ve got a great bullpen,” Merryman said. “We’ve got 15 guys that can go out there every day and compete with anybody. We’re going to be better than anybody. They’re dominant, and they’re going to do their stuff even when our starters don’t have it.”

Texas will return to action against Abilene Christian at 6:30 p.m. Wednesday at Disch-Falk Field.