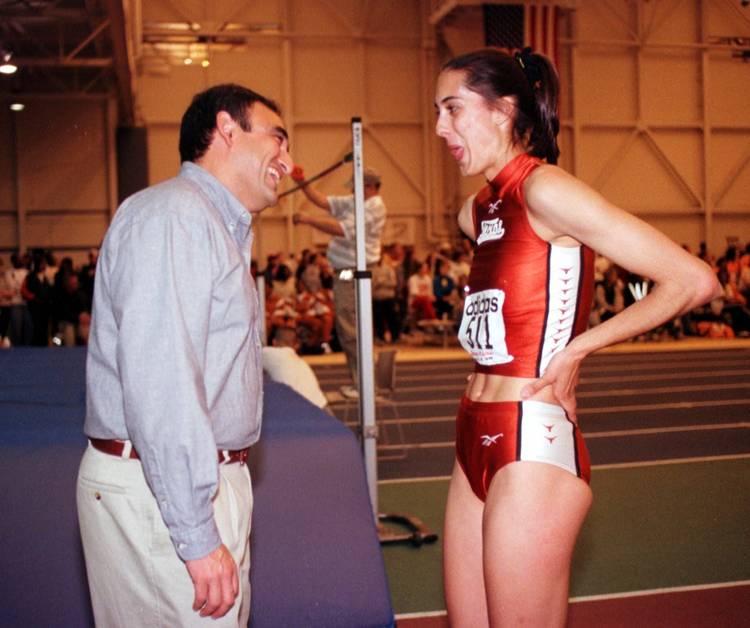 On Wednesday, three former Texas track and field athletes filed a class-action complaint against the NCAA, the NCAA board of governors and longtime track coach John Rembao for what they allege were dozens of incidents of sexual harassment and sexual abuse when Rembao recruited and coached them. The women argue the NCAA failed to protect them despite the schools being aware of Rembao’s alleged abuse. All three women were coached by Rembao at Texas during the time he was an assistant with the Longhorns program.

For more than a generation, Rembao has been a fixture in the sport of track and field. A specialist in the high jump, he has coached four Olympians, 15 individual NCAA champions and 93 All-Americans. He also has been given coveted roles within USA Track and Field, including serving as women’s high jump development coordinator for a decade.

Most recently, he was the head track and field coach at Los Gatos High School in Northern California, a job he told USA TODAY Sports that he no longer holds. On Dec. 18, the U.S. Center for SafeSport placed Rembao on a temporary suspension for allegations of misconduct. The nature of the allegations was not revealed by SafeSport.

“The behavior alleged in this story is disturbing,” Texas athletic director Chris Del Conte told the American-Statesman Wednesday. “Our current coaches and staff know that such behavior is totally unacceptable and will not be tolerated at The University of Texas.”

The lawsuit was filed in U.S. District Court for the Northern District of California. The women are seeking class-action status, punitive damages and the adoption of corrective measures by the NCAA.

The statute of limitations for alleged sexual abuse in both Arizona and Texas has expired in the cases of the three women. Nonetheless, they are hoping that the court will apply recognized exceptions to the limitations period and that their action will encourage others who are still within the statute of limitations to come forward, said attorney Beth Fegan, who is representing Aldrich, Johnson and Bevins.

Rembao, 59, who is assistant director of employer relations at the University of California Santa Cruz, said Tuesday in a phone interview that he had “not been informed” why he was suspended by SafeSport and denied allegations made in the lawsuit.

“This is ridiculous,” he said. “It never happened. This is completely false. This is just making me angry because this is all crap.”

Rembao said he didn’t remember exactly when he left Los Gatos High School but estimated it was late November or early December. He said he left for “personal, family reasons,” not because of SafeSport’s action.

Nancy Hogshead-Makar, Olympic gold medalist and CEO of the legal advocacy non-profit ChampionWomen, said the lawsuit could change the landscape for NCAA athletes with sexual assault or sexual harassment claims.

“This could open the floodgates for broad reform, both in courts and legislatively,” Hogshead-Makar said. “The stars might be aligned right now in society. This class-action lawsuit combined with everything else that’s going on with the #MeToo movement and sexual assault could be a game-changer.”

Aldrich, 42, Johnson, 39, and Bevins, 38, didn’t speak out for years, just like many other alleged victims and survivors of sexual abuse. But as they learned that Rembao was still coaching – not in college but in high school – they said it was time to come forward.

“I stayed silent for over 20 years because the thought of coming forward was horrifying to me,” Aldrich said. “But I decided that I couldn’t stay silent any longer. If I did, so many more girls would continue to be abused. Every person I shared my story with, I became more and more liberated. I finally felt that I can make a difference.”

Aldrich, Johnson and Bevins said that Rembao groomed them through long, attentive phone calls as he was recruiting them when they were in high school, then sexually harassed and sexually abused them when he coached them in college, according to a series of interviews and claims detailed in a lengthy complaint.

After Aldrich committed to attend Arizona to play volleyball and to high jump, where she would be coached by Rembao, she said their nightly conversations turned to questions about Aldrich’s social life and her appearance in her senior pictures.

“I was 17 years old but had the maturity level of a 13-year-old when it came to dating,” Aldrich said. “That’s how he preyed on me. He was grooming me by calling me beautiful and sexy. He had me in love with him even before he touched me.”

In August 1996, Rembao accompanied Aldrich, then 18, on a flight to Sydney, Australia, where she was going to compete in the world junior track and field championships. Aldrich said that while they were seated next to each other on the long flight, Rembao covered her with a blanket and penetrated her with his fingers.

“He told me that we were now members of the mile-high club,” Aldrich said. “He said he was going to leave his wife for me. He had me convinced that I could never be an Olympic athlete without him being my coach.”

Johnson’s story as alleged in interviews and the lawsuit is similar. “When I got to campus, it started immediately,” she said of Rembao’s sexual abuse. “He was constantly touching me. On a trip, he had me come into his hotel room and started putting his hands under my clothes. He showed up in my dorm room. It was traumatic, but I just closed my eyes. He was in control of my scholarship and my athletic career.”

One day, she had been working out when Rembao called and told her to come to his office immediately. “He went to hug me and I put my arms up, so he reached around me and pulled me into him and proceeded to lick the right side of my neck from the base up, and then pulled back and said, ‘Mmmm, salty.’ ”

Johnson said she became anxious, depressed and bulimic. Her grades plummeted. She told her parents what was happening and filed a formal complaint against Rembao with the University of Texas, submitting a 24-page document detailing the alleged abuse.

A subsequent university report concluded that Rembao should be disciplined for some of his behavior, but that he did not violate the university’s sexual misconduct and sexual harassment policies.

“When I told the university’s lawyer about Rembao licking my neck, he said, ‘I just think that’s bad manners,’ ” Johnson said.

Bevins also was a highly recruited track star in high school, and she chose Texas after Rembao spent hours on the phone with her. When she got to campus, she was called into Rembao’s office for weekly private meetings.

“He would lock the door, pet my head, kiss my neck and threaten my scholarship,” she said. “If he tells you to come to his office, you go. He’s in charge of your scholarship.”

Bevins decided she had to leave Texas. “I had no tears left,” she said. “I wanted to leave, and I realized I had to ask for his permission to transfer. I had to ask my abuser for permission so I could leave and go somewhere else.”

She spoke to Johnson, and as they talked, they realized they both were allegedly being sexually abused by Rembao. “That was huge,” Bevins said. “It was happening to someone else.”

Bevins agreed to testify on behalf of Johnson when she reported Rembao to Texas officials. “They were looking out for themselves, not for us,” she said.

She transferred to Arkansas, where her career flourished. “I still feel like the whole system failed me,” she said. “If that’s what success looks like, that’s terrible.”

“I don’t know what people’s lenses are, what things happen in life,” he said. “You know what, I touch my son every day, does that mean I’m trying to sexually harass my son? No, it’s just that, hey if we have a relationship and I give him a hug, there’s nothing to a hug.”

The lawsuit filed on behalf of Aldrich, Johnson and Bevins alleges that while the U.S. Olympic and Paralympic Committee and other various Olympic sports entities began to address the problem of sexual abuse in sports, the NCAA did not. Sexual assault is still not deemed an NCAA violation.

“Despite the USOC’s recognition in 1992 that all sexual contact between coaches and athletes should be prohibited, the NCAA took no action for 20 years,” according to the lawsuit. “Without NCAA controls, coach John Rembao was permitted to move among schools without recrimination despite multiple schools’ knowledge of his sexual abuse of student-athletes, including plaintiffs.”

Said Fegan: “This is a statement beyond these three women. I think the only way to make institutional change is not about focusing only on the individual victims but also on the failure of the system. With the #MeToo movement, women are finding more courage together to right a wrong, yet institutions are very slow to catch up. The only way in my mind is to make this about institutional change.”

12 big things about Big 12 basketball: At this point, Texas has better NCAA résumé than Tech

Are Texas, Texas Tech facing off in an NCAA play-in game? ’It may be or it may not’