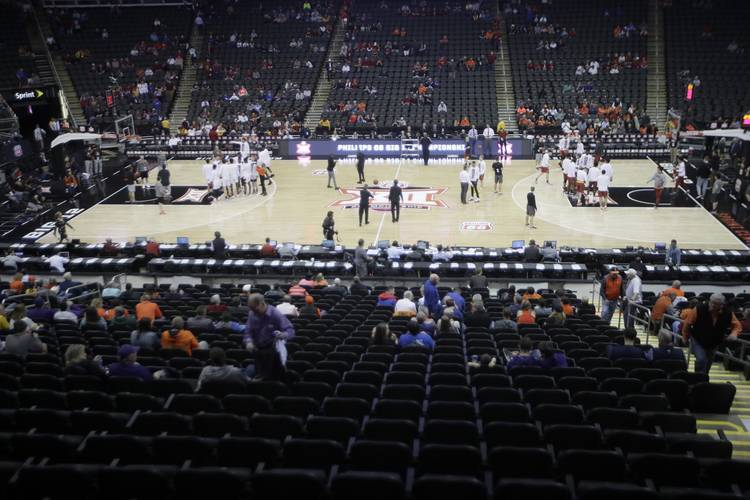 Fans watch Oklahoma State and Iowa State warm up before an NCAA college basketball game in the first round of the Big 12 men's basketball tournament in Kansas City, Kan., Wednesday, March 11, 2020. Fans will not be able to attend the tournament starting with the quarterfinal round. (AP Photo/Orlin Wagner)

March Madness will essentially be without two key ingredients — fans and madness.

“Obviously, we don’t do this lightly,” Bowlsby said at a late afternoon press conference at Sprint Center. “We are blessed to have the best basketball tournament in all of college basketball and to have to take these steps is painful for everyone that’s involved, but these are unusual times.”

The Big 12 will distribute only 125 tickets to each team for each tournament game this week. It’s expected that family and close friends will get those tickets. Bowlsby said there will be a refund process for fans who purchased ticket packages.

The Big 12 men’s tournament has drawn more than 94,000 fans to Kansas City in five of the last six years.

When fourth-seeded Texas faces fifth-seeded Texas Tech at 11:30 a.m. Thursday, there’s likely to be less than one thousand people in a building that holds 18,972.

“We feel it’s the right move with what’s going on around the country,” Texas athletic director Chris Del Conte said. “I feel bad for our student-athletes and our coaches. But the safety of everyone involved is paramount, and I think it’s the right move.”

A quick look at how many people are at Sprint Center for tonight’s first-round game between Iowa State and Oklahoma State. pic.twitter.com/dezzzkPVyf

Earlier this week, Bowlsby said the league tournament would have fans and that it wouldn’t be a problem. Clearly, others felt the same. At 2 p.m. Wednesday, the Big Ten released a statement that it was keeping the status quo, fans and all.

But at 3:30 p.m., the NCAA released a statement saying it was banning fans from its upcoming event, one of the most anticipated, most watched sporting events each year in the United States. NCAA Tournament organizers would invite “only essential staff and limited family attendance.”

“While I understand how disappointing this is for all fans of our sports, my decision is based on the current understanding of how COVID-19 is progressing in the United States,” NCAA president Mark Emmert said in a statement.

During the 3 p.m. hour, Bowlsby was meeting with Big 12 athletic directors at the Marriott hotel. When he emerged, Bowlsby told four reporters, “I’ll talk to you when I can, boys.”

Around 4 p.m., fans were starting to congregate at Sprint Center waiting to get in to see Iowa State face Oklahoma State.

Bowlsby said timing prevented league officials from closing the doors Wednesday, so fans were allowed in. It’s likely to be the final time fans get to see live Big 12 basketball until November.

“Until today, we have had no one tell us that having a building full of people was ill-advised,” Bowlsby said. “I was confident in being in the crowd, and we were assured that it was safe to assemble those crowds. Today that began to change.”

“I take him at his word,” Bowlsby said. “He’s one of the foremost authorities in the country and that was a much more severe warning than what we had heard.”

Just after 6 p.m., Bowlsby was announcing his decision to limit fans at Sprint Center as the national anthem was being performed. The Big Ten also backed off its stance and would have limited attendance at its event, too. Around 8 p.m. Central time, the Pac-12 announced similar measures.

The Big 12 tournament is a solid revenue generator for the league. However, Bowlsby said, “We’re not insured. It’s just about impossible to insure against this. They’ll be a very substantial loss of revenue.”

Meanwhile, schools all over Texas were grappling with what to do with the rest of the spring schedule. As of Wednesday, UT officials said there were no changes planned, although talks were ongoing.

TCU announced that fans would be kept out of home athletic events until April 3.

Asked if schools should cancel spring football, Bowlsby said, “I’m a little hesitant to weigh in on it because each one of the schools is dealing with it on their own.”

Are Texas, Texas Tech facing off in an NCAA play-in game? ’It may be or it may not’

See you later: With fans in the stands, Texas baseball cruises past Wildcats, 9-1