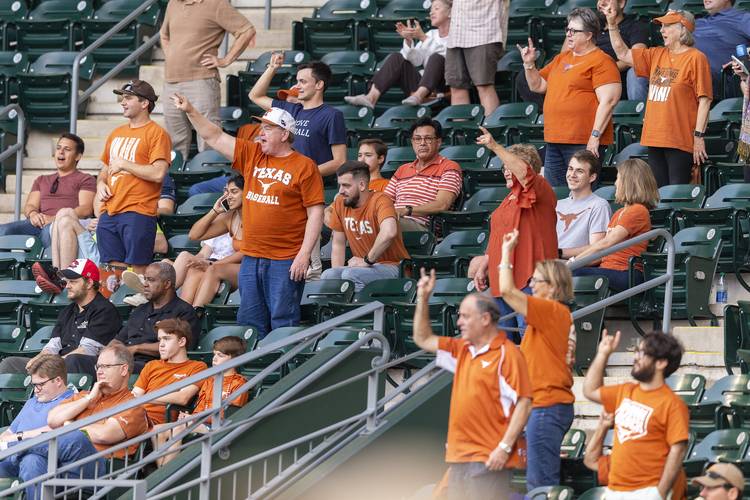 For the last time until March 22, Texas fans fell into their green folding seats at UFCU Disch-Falk Field on Wednesday night.

And just minutes before they rose in unison for the seventh-inning stretch during the Longhorns’ 9-1 win over Abilene Christian, UT athletics announced that all sporting events will be played without fans in attendance for the next 11 days.

The news cycle unfolded exponentially throughout the day with more confirmed cases of coronavirus while speculation grew about the possible cancellation of college basketball tournaments around the country. Indeed, the NCAA announced its men’s and women’s basketball tournaments will be played without fans, the Big 12 and other conferences followed suit and the NBA suspended its season indefinitely.

But in Austin, baseball played on.

The Longhorns (14-3) ran the bases with ease and prevented Abilene Christian (7-8) from making the matchup remotely close. The on-field action became an afterthought for many, though.

Just as left-hander Sam Walbridge settled in on the mound during the sixth inning, a separate announcement from UT President Gregory L. Fenves was made, detailing a plan of an extended spring break for students in order to combat the potential spread of the virus.

Longhorns players did not speak with reporters after the game. Many remained on the field to sign autographs and take photos with young fans.

“Well, I just hope that this epidemic gets cleared up,” UT coach David Pierce said. “You want to think, well maybe it’s a little public paranoia, but at the same time it sounds pretty serious. We’re going to do everything we can to protect our university, our athletic department and our team.”

“I think probably us older people concern ourselves with it more so than the 18- to 19-year-olds,” Pierce said. “But hopefully they are paying attention to their day-to-day sanitation and making sure they’re taking care of themselves.”

Many fans began turning to their phones more frequently than usual, but aluminum bats continued to ring. Right fielder Austin Todd raised his season average to .375 with two singles and a RBI. Second baseman Murphy Stehly also had a pair of hits and three RBIs. Starting pitcher Kolby Kubichek (2-1, 2.79 ERA) threw a career-high four innings and allowed only one hit.

The Longhorns, who had lost three of four games just a week ago, have now won four in a row. None of those, though, have come without fans in attendance.

Texas will play four games before March 22; the Longhorns host New Mexico State for a three-game series this weekend and play Incarnate Word at home on March 17.

Pierce acknowledged the unique atmosphere it will present for the players. But he also said there may be more challenges that the virus outbreak could present.

“It will be a challenge for us to bring all the energy,” he said, “and hopefully we get to stay together and play the three games.”

The Dotted Line: COVID-19 is causing problems for programs, prospects on the recruiting trail