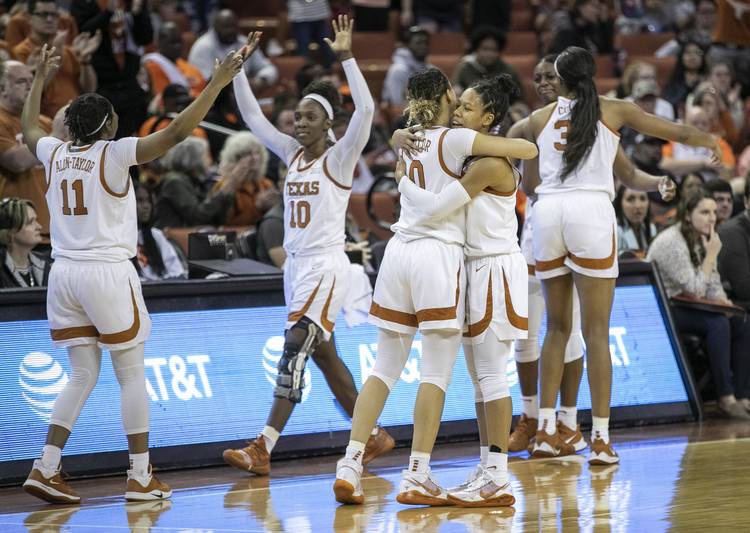 Those in the stands cheered the NCAA’s decision to cancel March Madness and all spring championships over coronavirus fears.

The competitors in the arena were devastated.

Those two Longhorns were among five seniors on the women’s basketball team who saw their seasons come to a screeching halt over COVID-19. On the men’s side, guard Andrew Jones was eager to play in his first Big 12 tournament since 2017. He badly wanted to reach the NCAA Tournament.

“I pray everyone and their families are safe,” Jones tweeted. “It is an unfortunate and tragic situation we are facing but we have to overcome our adversities. I wish I could finished the season with my brothers.”

On Friday, UT athletic director Chris Del Conte began meeting with coaches, players and staff all over the athletic department to bring everyone up to speed. As of now, the Big 12 has suspended all games, practices and recruiting until March 29.

School officials were expecting to close the training facilities, and athletes were being released to go home to their families. The university has extended spring break, and classes will resume March 30. The campus is likely to become a ghost town.

But COVID-19 hit home Friday when UT President Gregory L. Fenves announced that his wife Carmel has tested positive. “And a second member of my family (who works at UT) is presumed to have COVID-19 as well,” Fenves wrote in an email to the UT community.

“I have now been tested for the virus, and the three of us are in self-isolation,” he wrote.

“As our players leave campus for spring break, as our Winter & Spring athletes process the untimely disruptions to their seasons, and as our coaches, administrators and support staff help to guide our students thru this tumultuous time, I pray these verses over all affected,” Hand tweeted.

Women’s basketball coach Karen Aston was just as shocked as her players. “It’s just no closure. That’s the hardest part,” she said Friday. Her team finished third in Big 12 in the regular season and was planning on charging into the NCAA Women’s Tournament.

“It’s a life lesson, I guess, about enduring and getting through something that you don’t necessarily feel is right,” Aston said. “Things don’t always happen the way you planned them.”

Just after 6 p.m. Friday, the Big 12 announced it was canceling all conference and non-conference competitions through the rest of the academic year. Spring football is still possible, though.

To the NCAA’s credit, a key committee has recommended restoring one year of eligibility for all athletes in spring sports, like baseball, softball, golf, tennis and track and field. It’s still unclear if athletes in winter sports, like basketball, will get the same ruling.

Credit the NCAA. It was a bold, unique move, although a boatload of questions remain. The NCAA announced “appropriate governance bodies will work through those in coming days and weeks.”

“Well I can’t say I’m anything but disappointed at how my college career ended,” football and track standout John Burt tweeted. “I wasn’t able to go out on my own terms. But most of all, I’m heartbroken that I will never get to compete in the Burnt orange and white ever again.”

Burt tweeted that not being able to finish the right way “hurts like hell.”

Tripp Piperi, the 2019 NCAA national champion in shot put, was direct. “As sad as I am about my season coming to an end, it’s still an amazing feeling to be a Longhorn. HOOK’EM!!!,” he tweeted.

Even former Longhorns were stung by the last two days. All major sports leagues have suspended activities, including the XFL, which called off its entire season. The players will be paid, the league said.

“This feeling sucks, it’s hurts. Can’t believe it had to happen this way,” former UT offensive lineman Patrick Vahe tweeted. “Thankful for the opportunity but hate how this ended. Journey Continues…”

It’s unknown when Texas — or any sports league or athletic department, really — will get back to business. This total stoppage is similar to the Sept. 11 attacks, although athletics returned about a week later to provide normalcy. At this point with the outbreak, games will not be permitted at least until April.

Other questions linger, too. Spring football is likely to begin as soon as the university resumes classes. Should Texas move the spring game back or keep it on April 25? The game itself is largely symbolic, so it’s possible that date could remain the same, a UT source said.

What about men’s basketball coach Shaka Smart’s status? He could not be reached Friday. What about Aston, who’s in the final year of her contract?

“I’m anticipating being the coach at the University of Texas,” Aston said. “The time will come when I’ll sit down with (Del Conte) and we’ll talk about the future of my program, my staff, but this isn’t the right time.”

Aston paused and noted, “Things that we think are important are on the back burner right now.”

Some within the athletic department reached by the Statesman were unsure what would happen next. “Everything is fluid,” one person said. “Everything.”

“I’ll leave you with this,” UT running backs coach Stan Drayton tweeted. “For God did not give us the spirit of fear, but of power, and of love, and of a sound mind. 2 Timothy 1:7.

Game over: Title dreams become a nightmare for Texas as coronavirus concerns lead to cancellations