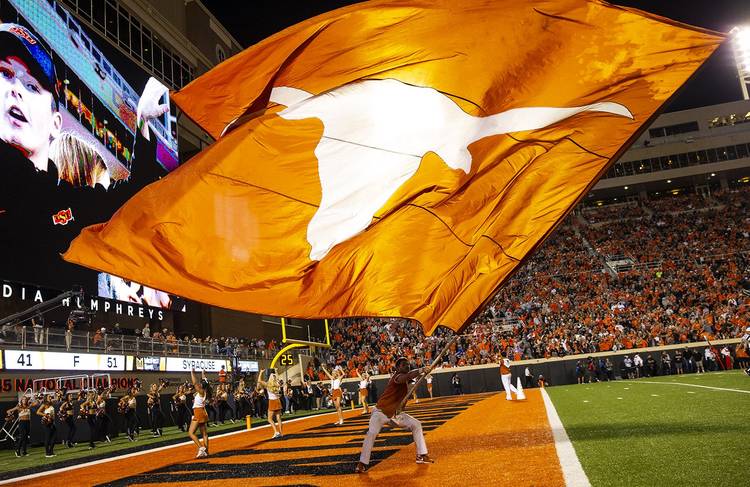 A Texas cheerleader waves a flag during an NCAA college football game against Oklahoma State in Stillwater, Oklahoma, on Saturday, Oct. 27, 2018. [NICK WAGNER/AMERICAN-STATESMAN]

The recruiting calendar was altered when the NCAA decided to prohibit in-person recruiting on and off of college campuses and high schools until April 15 due to the COVID-19 pandemic. March and April are normally important months on the recruiting calendar, as recruits take visits to campus and college coaches fan out across the nation to scout prospective talent.

The Dotted Line will focus on the 2021 Fabulous 55 for the next two weeks, breaking down the skill-set and recruiting situations of each player on the list, beginning with Nos. 55-51.

Murphy is a powerfully framed, agile defensive tackle who uses his size to win leverage battles. He emerged as a playmaker as a junior, recording 98 tackles, 5.5 sacks and three fumbles. He also forced four fumbles. He earned AP Class 6A all-state and all-district honors as a junior in 2019. Murphy added offers from Texas Tech, Washington State and Minnesota in February. He took an unofficial to Texas Tech and Auburn before the travel restrictions began. Georgia offered on Jan. 30.

Sanders led Trinity Christian to three consecutive TAPPS championships as the starting quarterback over the past two seasons. He’s 27-1 as a starter at the varsity level over the past two seasons. He’s passed for 8,796 yards and 123 touchdowns in three years of high school experience. Sanders is the son of Deion Sanders, the Hall of Fame cornerback. Shedeur holds offers from programs like Alabama, Georgia and Florida. He’s a national top-250 prospect, per 247Sports composite rankings. Sheduer is a pass-first quarterback without the athleticism of his legendary father.

The big-bodied defensive lineman from Wichita Falls could grow into an athletic defensive tackle by his freshman year of college football. He’s currently a big, strong defensive end who terrorizes offenses at the point of attack. Banks was a first-team all-district honoree as a junior after registering 95 tackles and 14 sacks. He holds offers from Texas A&M, Baylor, TCU and Arkansas. He added one from Washington State on Feb. 28.

Abiara is a high-upside defensive lineman with positional versatility. He’s athletic enough to remain a physical defensive end who is best at the point of attack, or he can grow into a three-technique defensive tackle. His offer list continues to grow, and it includes power programs like Alabama, LSU, Notre Dame and Oklahoma. Abiara recorded six sacks and 12 tackles for loss as a junior.

Jenkins is a big, reliable running back with production to match his testing numbers. He’s rushed for 2,926 yards and 44 touchdowns over his past two seasons at the varsity level. Jenkins’ offer list includes Baylor and Texas Tech. He’s also capable as a receiver out of the backfield. Jenkins earned first-team all-district honors and AP 5A all-state second-team honors as a junior. USC, Tennessee and Houston offered in February.

Texas athletes, coaches come to grips with stoppage, all wonder what’s next