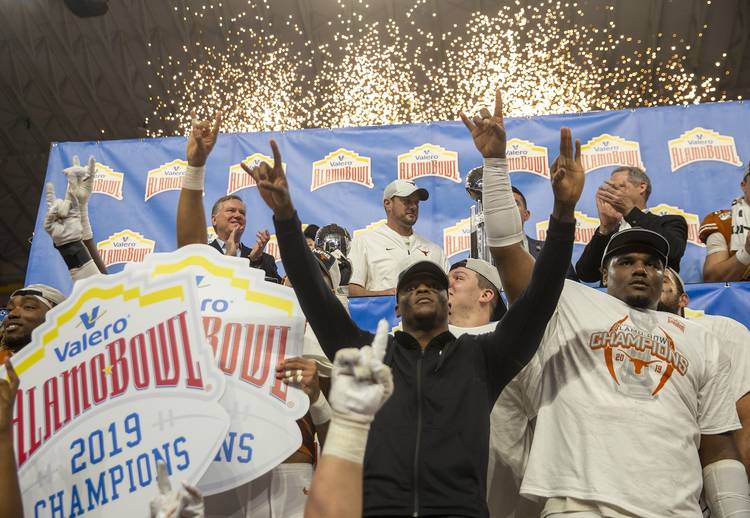 Texas Longhorns head coach Tom Herman holds up the trophy after beating Utah Utes 38-10 during an NCAA college football game at the Valero Alamo Bowl at the Alamodome on Tuesday, December 31, 2019 in San Antonio, Texas. [RICARDO B. BRAZZIELL/AMERICAN-STATESMAN]

The coronavirus has infected the NCAA’s spring calendar, and now Texas spring football is likely next to be canceled.

Big 12 athletic directors are scheduled to meet Wednesday via teleconference, according to sources. The situation is fluid, but it’s expected the league will announce spring football games and practice will be canceled.

The infectious disease has already brought the sports world to a stop, and Texas ex Kevin Durant announced Tuesday that he has tested positive. UT President Gregory L. Fenves has announced his wife did, too.

UT officials announced Tuesday that all classes will move online beginning March 30. In addition, students are required to move out of the dorms, “though emergency housing will be available on a case-by-case basis,” the university said.

If students aren’t allowed on campus, then it’s impossible to envision how the Longhorns can hold spring football practice.

“We are asking students not to return to campus this semester unless there is a specific need,” Fenves said in a statement on Tuesday. “This decision has been made to protect the health and safety of all members of the UT community and reduce the spread of COVID-19 within the university and beyond.”

Starting on March 30, we will be moving all spring semester classes online. We are asking students not to return to campus this semester unless there is a specific need: https://t.co/Vx3hdgkyzU pic.twitter.com/KOosUPgaDa

The Big 12 had already announced that all competitions, practices and recruiting would be suspended through March 29. This was UT’s regularly-scheduled spring break week. The Horns were scheduled to start spring football on March 24.

By making it a league announcement, the Big 12 made sure everyone in the conference is on equal footing from a competitive standpoint. No individual coach was forced to make a tough decision in this environment: Should we practice, should we play or not?

As one source explained, how would it look at the campus level if Coach X decided her team should practice while Coach Y decided his team could not?

The SEC announced Tuesday that all competitions were canceled through the end of the academic year. All spring football games were canceled, including all pro timing days for seniors hoping to impress NFL scouts.

The ACC announced that everything was canceled through the rest of the spring academic year. “The unanimous decision was made to mitigate the further spread of COVID-19,” the ACC said in a statement.

Update: All athletic related activities through the end of the 2019-20 academic year have been canceled. https://t.co/mABSIQSeEx

It’s believed among league sources that the Big 12 would follow the other major conferences.

“This is a difficult day for all of us, and I am especially disappointed for our student-athletes,” SEC commissioner Greg Sankey said in a statement. “The health and well-being of our entire conference community is an ongoing priority for the SEC as we continue to monitor developments and information about the COVID-19 virus.”

The SEC was clearly trying to remain hopeful, though. Team practices and meetings would be suspended through April 15. Thus, the nation’s most influential football conference still has its fingers crossed that some kind of spring football can happen.

“There is a mission that overshadows our desire to compete and that relates to the safety of those we are entrusted to serve,” Texas A&M athletic director Ross Bjork said in a statement. “Unprecedented times call for these measures, and we are navigating through unfamiliar territory.”

But schools now face the prospect of simply running out of time. The NCAA forbids any spring football practice to be held after the completion of the spring academic semester. May 8 is the last day of scheduled classes at Texas, according to the calendar posted by the registrar. Final exams begin May 13, and graduation ceremonies are scheduled for May 22-23.

Not only that, but several Texas players are scheduled to take summer courses. Summer school usually begins the first few days of June. Nobody at UT believes the coronavirus will impact the start of the 2020 season, but at this point, it’s impossible to know for sure.

Inside the athletic department, there was a sense the spring game would happen regardless — as everyone assumed spring football would start eventually. The actual date for the spring game is meaningless; the Horns could keep practicing after April 25 with no issues. By NCAA rule, each team is allowed 15 spring practices, a total that must include the spring game itself.

Herman was psyched for the spring. He hired two new coordinators, Mike Yurcich (offense) and Chris Ash (defense), and has quarterback Sam Ehlinger returning for his final season. The south end zone expansion project is coming along well. The Horns had a spring in their step coming off the Alamo Bowl win and another strong recruiting class.

“Excited about about what we’re continuing to build here in this program,” Herman said on national signing day in February.

Now, it’s all seemingly frozen as everyone inside UT and elsewhere wait to see what happens next.