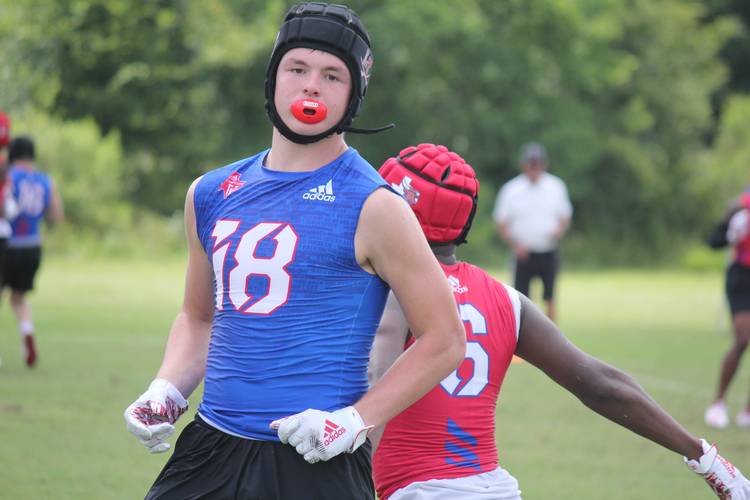 The recruiting calendar was altered when the NCAA decided to prohibit in-person recruiting on and off of college campuses and high schools until April 15 due to the COVID-19. March and April are normally important months on the recruiting calendar, as recruits take visits to campus and college coaches fan out across the nation to scout prospective talent.

The Dotted Line will focus on the 2021 Fabulous 55 for the next two weeks, breaking down the skill set and recruiting situations of each player on the list, continuing with Nos. 50-46.

Wykoff’s stock grew in February as he picked up seven offers, including Auburn and Tennessee. The big-framed offensive lineman released his top seven schools on March 5, which included Texas, Texas A&M and Texas Tech. Wykoff was a first-team all-district selection as a junior.He’s big frame and ability to block at the point of attack suggests he could also move into guard. Wykoff is likely to receive a fourth star on the next ranking update.

The 2021 cycle is a great year for in-state talent at offensive tackle, and Wykoff should be included when discussing the best prospects in Texas, and he could become an important one for the Longhorns in this cycle. Texas’ top target at offensive tackle is five-star Tommy Brockermeyer. The Longhorns already hold a commitment from four-star Hayden Conner. Wykoff moves up the board if targets like Savion Byrd and Reuben Fatheree II lean towards the SEC or Oklahoma.

Valdez is a big-play weapon at running back who is also a threat out of the backfield as a receiver. He arrived on the varsity scene as a sophomore, rushing for 1,175 yards and 17 touchdowns as a sophomore. That earned Valdez the District 10-3A Division I Offensive Newcomer of the Year. He backed that up with Offensive MVP honors of the same district as a junior. Valdez rushed for 1,697 yards and 26 touchdowns as a junior. The Rockdale product picked up Arkansas and Nebraska offers in February. He has official visits planned to Oklahoma State and Texas Tech when recruiting travel is permitted.

The Austin-area product missed his junior season due to injury. He backed off of his preseason commitment to Texas in February to focus on recruitment. He picked up offers from Alabama, LSU and Auburn following his pledge to the Longhorns. McRee caught 17 passes for 274 yards and two touchdowns as a sophomore.

Texas clearly wants two tight ends in the 2021 class with three-star Juan Davis of Everman High School already in the fold. Davis is a long, lean prospect with more experience at wide receiver than tight end. McRee is the same type of prospect, but his frame suggests that McRee could reach 250 pounds with ease. The easy comparison is Cade Brewer, a current Longhorn and a former star at Lake Travis, but it might be the right one.

Cooks found a varsity home at Shadow Creek as a junior after spending his sophomore year at Houston Fulshear and his freshman season at Houston Christian. Cooks registered 72 tackles and forced three fumbles in 2019 while helping his high school to a perfect record and the Class 5A Division I state championship. Cooks is Texas’ top target at outside linebacker in the 2021 cycle and will end it as a four-star recruit. He’s recently picked up Alabama, Georgia and Stanford. Cooks is a long, rangy linebacker with coverage skills.

The linebacker position is of upmost importance for Texas in the 2021 cycle under new defensive coordinator Chris Ash. He’ll want an influx of the type of players he thinks fits best in the new 4-2-5 scheme. Cooks’ importance to Texas, as well as the move of DeMarvion Overshown from safety to linebacker, shows that Ash envisions his weak-side linebacker as an overgrown safety with the ability to attack downhill and get sideline-to-sideline.

Harmon is a two-time all-district selection for one of the state’s premier Class 6A programs. He’s an ultra-fast defensive back who ended 2019 with 45 tackles and two interceptions. He’s broken up 20 passes over his past two seasons on varsity. He has five varsity interceptions and was timed at 4.5 in the 40-yard dash at The Opening regional during his junior year. He’s not ideally sized for a cornerback, but he makes up for it with size, athleticism and leaping ability. Harmon could also slide inside to nickel back. Texas A&M and Notre Dame are the current leaders.

As coronavirus impacts continue, Texas is bracing for cancellation of spring football