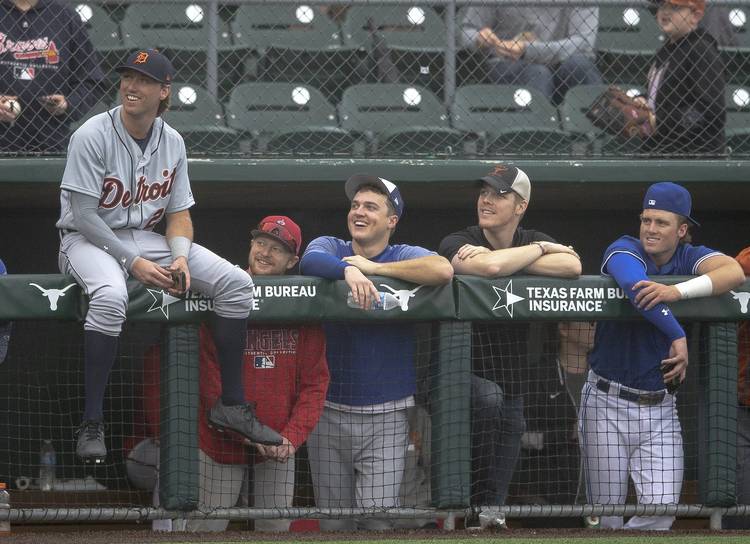 How was the former Longhorn progressing as a professional?

Where did he think he’d start out the 2020 season?

Kingham, a 12th-round pick in the 2018 MLB draft, logged 27 starts last year for three minor league affiliates of the Atlanta Braves. He ended the season in Double A, compiling a 3.79 ERA for the Mississippi Braves. He had high hopes of returning to Mississippi this spring.

But those plans are on hold for now. Due to concerns over the spread of the coronavirus, the start of baseball season has been put on hold and spring training has been canceled. Kingham found out at a team meeting at the Braves’ spring training facility in North Port, Fla. Everyone needed to head home, they were told.

“I felt like I was in a good spot for this upcoming season, working my ass off to get there, and now it’s like it’s so far for all of us,” Kingham told the American-Statesman last week. “I think the decisions being made are of course for the best of everybody, but it sucks being a player and having zero information on what is going to happen, considering this is our job.”

Six former Longhorns played in the major leagues last year. As Cincinnati’s Rule 5 acquisition this offseason, outfielder Mark Payton could join that group if and when the season resumes. The majority of former Texas players still in baseball, though, are in the minors.

Life in the minor leagues is hardly glamorous. Most players do not make a livable wage, and not all prospects received a sizable signing bonus. Paychecks don’t come during the offseason. It took until Thursday for MLB to pledge that its minor leaguers would be compensated through April 8.

With limited financial resources, many minor leaguers are in the same boat. Booted from spring training, how do they stay in shape and prepare for the upcoming season?

The Texas campus has been shuttered, so the ex-Longhorns don’t have access to UT’s new multi-million dollar development center. High schools and gyms across the nation have also been closed.

Kingham has turned to home workouts; his girlfriend has stepped up as his throwing partner. Kansas City outfield prospect Travis Jones plans on using the old batting cage in his parents’ backyard in Humble. Ty Culbreth, a left-hander in Colorado’s farm system, is training alongside a few others and treating this time as if it were December or January. Morgan Cooper, who was a second-round pick in 2017, has been allowed to stay in Arizona at the Los Angeles Dodgers’ facility since he is rehabbing an injury.

“Right now, my training is mainly outside, trying to find little things to do here and there to keep my body in shape and ready to go,” said Kyle Johnston, a pitcher in Toronto’s organization.

A local option for UT’s minor leaguers — at least those who swing a bat — did open its doors last week. The Hitforth facility in South Austin has several ties to Texas. Owner Lowell Galindo is a Longhorn Network host who does play-by-play for baseball broadcasts. Former UT infielder Masen Hibbeler is a coach on the Hitforth staff.

Hitforth is described by Jeff Leach, its director of hitting, as a “hitter’s heaven.” It’s also a haven for the technologically savvy. The facility uses HitTrax, Blast and Driveline to track data. The iPitch machines can be calibrated to imitate any type of pitcher.

Hitforth is targeting clients who are both competitive and committed, whether they be 10-year-olds or in high school. (Hitforth does not yet instruct softball, but does have a pitching machine for that sport). In addition to lessons, the facility is designed so that hitting competitions can be staged. Fun and swag — bandanas, chains and arm sleeves — are also encouraged.

“We want this to be a place that empowers athletes to realize their full potential as powerful, athletic hitters,” Galindo said. “(Ideally that would) bleed through into other areas of their life. … We want this to be the foundation of their confidence.”

Membership is not cheap — $100 each month gets you unlimited hitting and data tracking, and an initiation fee and individual lessons are extra.

Galindo, though, recently tweeted that Longhorns on a professional hiatus can use the facility for free. He’s heard from minor leaguers like Zane Gurwitz (Los Angeles Angels), Bret Boswell (Colorado) and Michael Cantu (San Diego). For Galindo, offering up his facility was a way to pay the Longhorns back for the time they’ve spent with him and young fans like his son, Mack.

“To me it was a no-brainer that we would provide them with the opportunity to get all the swings in that they possibly need,” Galindo said. “It’s family, right?”

The MLB season was set to get underway on March 26. The minor leaguers had April 9 circled on their calendars. Those dates have been indefinitely postponed but players remain optimistic that a first pitch is still on the horizon. Cooper, though, conceded that he’s “just unsure of when it would be.”

“At this point all I can do is hope for the best,” Kingham said.