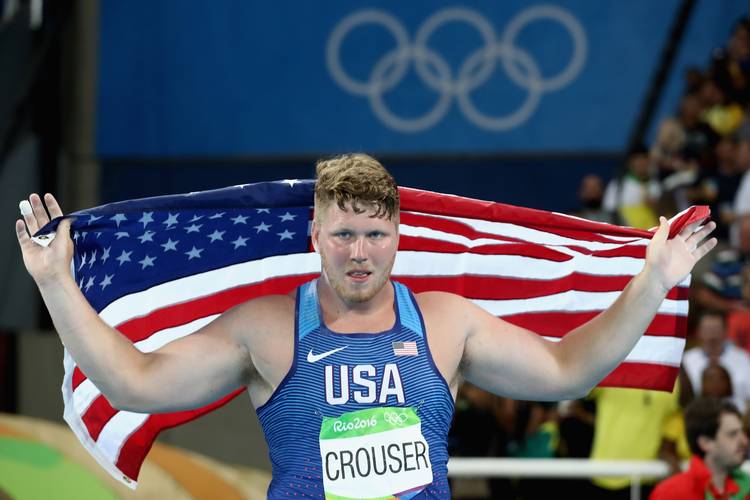 Ryan Crouser of the United States celebrates a new Olympic record of 22.52 meters in the shot put at the Rio Olympics on Aug. 18, 2016 in Rio de Janeiro, Brazil. (Photo by Alexander Hassenstein/Getty Images)

After years of wearing burnt orange, a handful of Longhorns were looking forward to donning gold, silver or bronze this summer.

Texas was poised to send a contingent of current athletes and former athletes to the Olympics in Tokyo. Those plans, however, were postponed Tuesday by the International Olympic Committee. Due to concerns over the spread of the coronavirus, the IOC pushed back the Games until at least 2021.

“When you think about the Olympics specifically, I think the whole goal is a world competition where everybody can be the best of the best,” former UT pitcher Cat Osterman told the American-Statesman on Tuesday. “You expect everyone to be in elite mode at the point and time. With everything going on right now, there’s just athletes that can’t be.”

Who in Texas’ athletic department was impacted by the decision? Below is a list of several Longhorns who were trying to secure invitations to the Olympics:

Kevin Durant hasn’t played this season due to an Achilles injury. In February, he was still named one of 44 finalists for USA Basketball’s Olympic roster.

Durant is a two-time Olympian and gold medalist.

Texas sophomore Julia Grosso was attempting to reach Tokyo with Team Canada, which has already qualified. She was on Canada’s roster for the 2019 World Cup, though she did not appear in any matches.

This spring she was enrolled in only one online class as she focused on her role with her national team.

Softball has been absent from the Olympics docket since 2008, but it was set to return this summer. Osterman, an Olympian in 2004 and 2008, recently came out of retirement and earned a spot on Team USA.

On the women’s side, former UT All-American Madisyn Cox is considered a contender in several events. Alison Gibson, who is currently a senior, and Murphy Bromberg were possibilities in diving.

For swimming and diving, the U.S. Olympic Trials were to be held in Omaha, Neb., in June.

Former UT stars Ryan Crouser and Michelle Carter both won the shot put competition at the Rio Olympics. The qualifying standard for the men’s shot in 2020 was 21.10 meters, which is just under the throw that Texas junior Tripp Piperi won last June’s NCAA outdoor championship with. The Team USA roster also could feature former UT sprinters like Teahna Daniels, Morolake Akinosun and Courtney Okolo and hurdler Ashley Spencer (the latter three all won medals in Rio).

The Olympic Trials were to be held in Eugene, Ore., in June.

There are international possibilities for other Longhorns, too. Sophomore Jonathan Jones already owns the 400-meter record for the country of Barbados. Sophomore sprinter Julien Alfred may represent both Texas and St. Lucia in Tokyo. In Rio, Chrisann Gordon won a silver medal with Jamaica’s 400-meter relay team while Pedrya Seymour was a finalist in the 100-meter hurdles while competing for The Bahamas.

Former Longhorns standouts Chiaka Ogbogu and Rachael Adams were considered contenders for spots on the U.S. volleyball team in Tokyo. At the Rio Olympics in 2016, Adams scored 84 points and won a bronze medal.