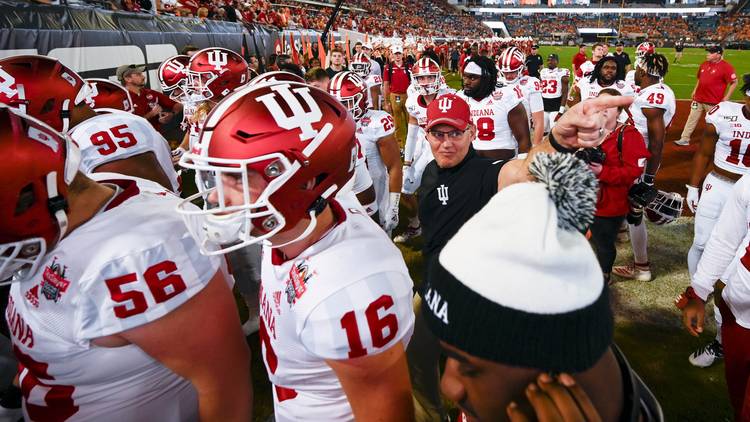 Whether the 2020 college football season begins as scheduled — or, in the worst case, if the season exists at all — may be decided by late spring or early summer, and will hinge largely on when teams currently separated by distancing efforts are able to gather on campuses and restart offseason programs sidelined by the coronavirus strain.

Teams are only beginning to address the issue in earnest, as coaching staffs attempt to map out and scheme for college football’s indefinite absence. However, many Bowl Subdivision head coaches say they believe that early July, and preferably June, is the latest teams could return to normalcy and still meet the start of the upcoming season, which is scheduled to begin on the last Saturday in August.

“You’d like to get them back by June,” said Indiana coach Tom Allen. “As long as we can have June and July to get our players ready, I think that’s enough time.”

RELATED: Longhorn Confidential: How seniors, recruiting and Texas are impacted by coronavirus cancellations

RELATED: On Second Thought Ep 174: Brian Davis on the chances of Texas spring football being cancelled and coronavirus impact on Longhorn Foundation

By the middle of June would be preferable and “July 1 would be the absolute latest, in my opinion, to have one month before you started fall camp,” South Florida coach Jeff Scott said. “Anything later than that would be a big challenge — a bigger challenge. I would say we’ll know more in a month from now. We’ll probably be able to guess. Even if we don’t know, we’ll be able to have a better guess.”

Three main factors are influencing the thinking of FBS programs and head coaches, who have been forced to redraw offseason plans since the widespread cancellation of all spring activities earlier this month.

One is scheduling. NCAA bylaws related to the start of fall camp dictate that a team can open practices no earlier than 29 days before its first game. (There are mitigating circumstances that can impact start dates for universities that prohibit athletics activities during a specific day of the week due to religious reasons.) Teams slated to begin this season on Aug. 29, for example, would be allowed to start fall camp July 31.

Typically, most or all of an FBS roster during any given season is collected on campus within the two weeks following Memorial Day, marking the start of summer workouts. A later start this offseason would compress that schedule, perhaps dramatically.

Another factor is the lack of a traditional spring, which has had a general impact on the overall readiness of teams heading into summer workouts. Compounding that issue is the most pressing topic of concern: that with athletes away from campus and unable to participate in standard conditioning programs, teams may be able to reconvene in early July but will need a longer stretch of time than normal to get back into playing shape before taking the practice field later that month.

“That’s one of my concerns,” said Old Dominion coach Ricky Rahne. “When do we get them back? And can we build them up in time in order to last the entire season?”

Teams could need up to six weeks to become physically ready for training camp, Washington State coach Nick Rolovich estimated. In that timeline, teams would need to be gathered without any practice or training limitations no later than the middle of June.

“I’m sure there needs to be some kind of strength and conditioning period,” he said. “That’s what’s going into this conversation. What do these kids need? What do these kids deserve, to be able to withstand a 13-, 14-, 15-game season? You talk about health and wellness of student-athletes, you can’t just show up at training camp, not in today’s game, and think you’re going to get 25 practices in and feel like your guys are prepared to not only put on a good football game but safety-wise, you know.”

Most programs have been separated for the better part of two weeks as part of the larger decisions made by universities to close down classes for the remainder of the spring semester. Coaches have worked remotely while athletes have returned home, leaving programs to conduct positional or team-wide meetings using FaceTime and Zoom.

Those tools have made it possible, if still a challenge, for teams to study playbooks and review film. But programs have been unable to replicate the crucial conditioning programs that define college football’s offseason even as strength coaches issue voluntary workout plans with group text messages or on private Instagram pages — plans that rely almost entirely on body weight to offset the lack of private and quarantined gym space available to the everyday athlete.

Even as some strength coaches tailor workouts by position or even to a specific player, the lack of in-person contact among coaches and athletes makes it difficult to estimate the time frame needed to round back into playing shape.

Penn State coach James Franklin spoke earlier this week with university athletics director Sandy Barbour and on Wednesday held conversations with members of the Nittany Lions’ strength staff and training staff to discuss options for when, and how, the team could return to the football facility this summer.

“We’ve got to come out of this and be ready to hit the ground running,” Franklin said. “What is that? Is it 30 days, 45 days, 60 days? Is it 90 days? What is needed to make sure that we’re going to be in good shape, that the players are going to be able to protect themselves and be able to go out and compete at a high level? What does that look like?”

The June or July deadline isn’t shared by all coaches. Ohio State’s Ryan Day said it was important that players stay in shape, but that “it wasn’t that long ago” that teams didn’t return to campus in full until August, “and they got themselves in shape.”

“You went through preseason camp and you did everything you can to get them into shape to go play in September,” Day said. “So that model is out there.”

That mindset resembles the outlier. It would be hard to come back in August and get his team ready, said Boston College coach Jeff Hafley. Overloading teams with workouts and practice after a long absence might be “overzealous,” said Kent State coach Sean Lewis.

“I don’t see that being real smart or real logical,” Lewis said.

While teams may have been able to prepare over a shorter timeline in the past, Rahne said, athletes today are used to a longer run-up to the regular season and, depending on their home state, year-round football. Cramming workouts and practices into that sort of calendar “would be completely foreign to them,” he said.

Conversations held this week on a conference level among coaches and athletics directors have concerned how and when to replace practices lost during the spring, and to a lesser degree over the impact spring cancellations will have on the recruiting calendar.

While college football’s offseason calendar remains very fluid — some coaches, such as Minnesota’s P.J. Fleck, are planned out until the middle of April and plan to readdress the calendar then — discussions on a conference and FBS-wide level will eventually shift to developing a standardized start date for preseason workouts. The varying impact of COVID-19 on cities and campuses may complicate that equation.

“If we get everybody back here at the end of May or first of June, then I’d feel good,” Scott said. “But if we don’t see an end in sight a month from now and it looks like it’s going to push into July, then that’s when they could start talking about abbreviated seasons and all those kinds of things.”