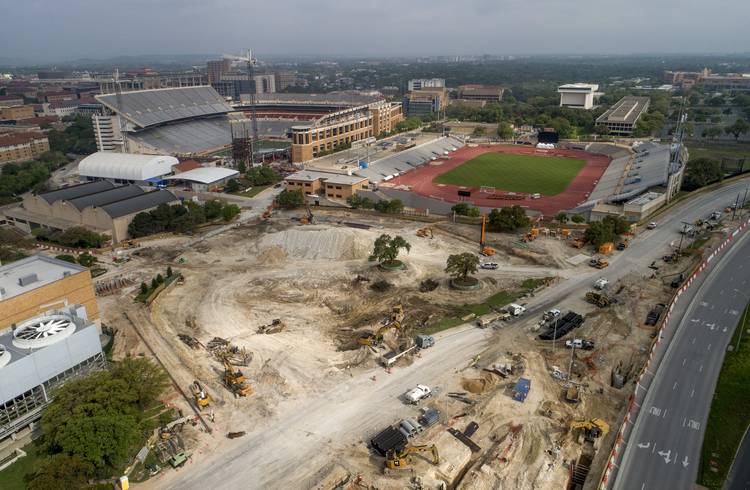 Site preparation is underway for the construction of the Moody Center on the UT campus on Wednesday March 26, 2020. [JAY JANNER/AMERICAN-STATESMAN]

While many workers are stuck at home, construction marches on at Royal-Memorial Stadium and the Moody Center.

“Oh yeah, they’re going full steam ahead. I was out there yesterday watching them,” Del Conte said Thursday during an interview on 1300 The Zone. “The tower on the south end zone is going up as we speak. It’s awesome. We’ll have both towers up and the scoreboard up for the fall, if everything goes on pace.

“The basketball arena, it looks like a crater just came out of nowhere and just blasted right into the side of that hill,” he added. “It’s about 30 feet deep right now, going down to 60. It’s going to be phenomenal. So we’ve got about another 30 feet to go when you get to the bottom of that crater. It’s really exciting to see.”

Area builders are pushing city leaders to keep construction going in the face of the COVID-19 pandemic. Austin’s order says the city will not issue a violation to operators “if they can demonstrate work on the site was undertaken the close down the project as safely and quickly as possible.”

At Texas, the football stadium’s south end zone expansion and new basketball area are two projects worth more than $500 million. The new end zone project is slated to be completed for the 2021 season; the arena is scheduled to open for the 2022-23 season.

“So, track project still continuing and so is softball,” Del Conte told The Zone. “So we’re Steady Eddie going as we’re going. I know the city’s shut down until April 12 all over town, and that’s great.

“And our place, We’re continuing doing our projects, but they’re a little bit different because they’re spaced out so much,” he said. “You have people at a safe distance, and we also gotta make sure they’re doing what they’re doing. So it’s interesting to me that they’re able to do it, but I watched them yesterday.”