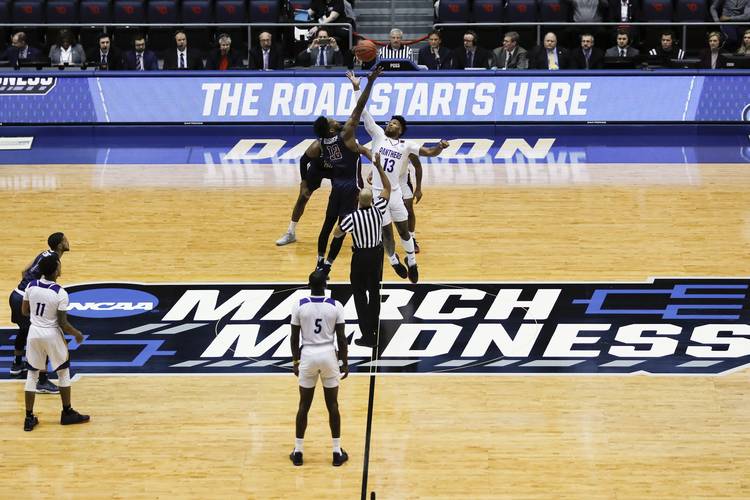 In this March 19, 2019, file photo, Fairleigh Dickinson's Kaleb Bishop (12) and Prairie View A&M's Iwin Ellis (13) leap for the opening tip-off in the first half of a First Four game of the NCAA college basketball tournament in Dayton, Ohio. NCAA President Mark Emmert says NCAA Division I basketball tournament games will be played without fans in the arenas because of concerns about the spread of coronavirus. (AP Photo/John Minchillo, File)

The NCAA will reduce its direct distribution to Division I conferences and schools for 2020 by about $375 million to $225 million, the association announced Thursday.

According to its 2020 Division I Revenue Distribution Plan document, the NCAA had been scheduled to distribute just under $600 million directly to conferences and schools from April 15 through June 10.

That would have represented a 1.7% increase over the amount budgeted for 2019, but the actual distribution for 2019 ended up being $611 million, according to the association’s recently released audited financial statement. (When the association runs an annual operating surplus, it often makes a supplementary distribution to Division I conferences and schools.)

The association said of the $225 million distribution, $50 million will come from NCAA reserves. The NCAA also has a $270 million event cancellation insurance policy, and the proceeds when received will be used to pay off a line of credit that will cover the remaining distribution within 12 months.

In a news release, the board said it wanted to stress “the importance of using the distributions to aid college athletes,” and said this move will allow schools to make plans while the NCAA works with its “contractual partners.”

“We are living in unprecedented times not only for higher education, but for the entire nation and around the globe as we face the COVID-19 public health crisis,” Ohio state president Michael V. Drake, chair of the board, said in the release. “As an Association, we must acknowledge the uncertainties of our financial situation and continue to make thoughtful and prudent decisions on how we can assist conferences and campuses in supporting student-athletes now and into the future.”

Drake also said the Association will make cuts to the budget “that will be determined in the upcoming weeks.”

The NCAA had been expected to borrow money to replace revenue lost from the cancellation of the Division I men’s basketball tournament due to the coronavirus pandemic.

On Tuesday, one of the nation’s three major credit-rating firms issued a report in which it estimated massive declines in the NCAA’s revenues and expenses for the association’s current fiscal year based on information and assumptions that included the NCAA tapping a line of credit.

While the estimate from Moody’s Investors Service was based on work by its analysts, vice president and senior credit officer Dennis Gephardt told USA TODAY, “We had conversations with (NCAA officials) and they offered general guidance.”

Moody’s estimated that the NCAA will have about $654 million in revenue and about $668 million in expenses in fiscal 2020.

During a fiscal year ending Aug. 31, 2020, the NCAA had been scheduled to collect $827 million just from its long-term multimedia and marketing rights agreement with CBS and Turner, according to the association’s financial statement. That statement attributed $178 million in non-CBS/Turner.

“The Association has prepared for a financial catastrophic event like the one we face now,” Drake said. “While we certainly have challenges ahead, we would be in a far worse position had it not been for this long-standing, forward-focused planning.”