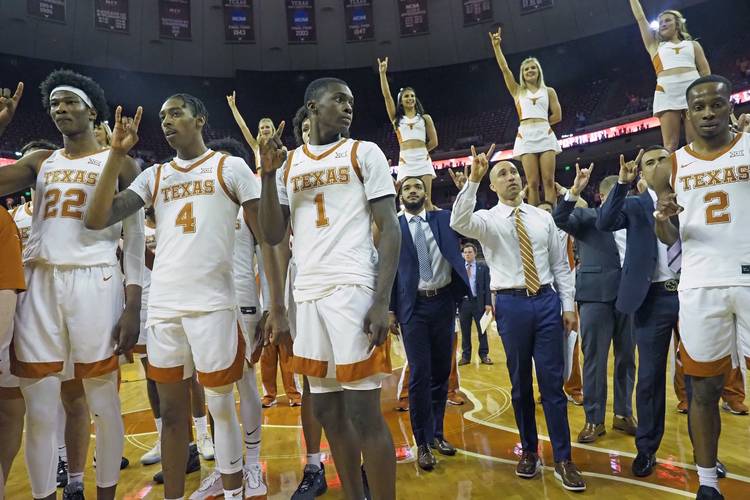 Now that there’s more clarity about his future, Shaka Smart can plow headfirst into the offseason.

But the coming months will be no regular offseason for the Texas men’s basketball coach.

Students begin classes this week as the spring semester starts up again, albeit online only. In the era of social distancing, Smart has kept in contact with his players through phone calls and webcasts. He’s banking on an older team staying focused.

“We’ve been working ever since they canceled the season on helping our guys move forward,” Smart told the American-Statesman. “Obviously this is an unprecedented time, and our biggest focus has been on our players’ safety and all the components around this challenge.”

The cloud of uncertainty hanging over the program is now gone. UT athletic director Chris Del Conte said last Friday that Smart would remain in place for the 2020-21 season. “Shaka’s our coach,” he told the Statesman.

Smart had previously sidestepped questions about his future. He’s 90-78 in five seasons and 40-50 in Big 12 play. Under him, Texas has yet to win a single NCAA Tournament game in two appearances in four previous years. This year’s tournament was canceled because of the coronavirus pandemic.

“I’ve been in regular communication with Chris,” Smart said. “He’s been supportive. Obviously he’s got a lot on his plate right now in terms of handling this challenge. But we’ve had conversations about our team and recruiting and they’ve been good.”

Texas was 19-12 this season and finished in a four-way tie for third place in the Big 12, the team’s highest finish under Smart.

Was this team going to make the NCAA Tournament? Brackematrix.com had the Longhorns in only 43 out of the 97 projected brackets the site tracks.

“I had talked to some people I know that maybe were in-the-know on that kind of stuff,” Smart said. “I think our team was in really, really good position. It’s really impossible for anyone to say where everything would’ve ended up.”

The bulk, if not the entirety, of the team is expected to return next season. The biggest question mark is Jericho Sims, a 6–9 athletic freak in the middle. He missed the stretch run in February due to a lower back injury, and now he must decide whether to stay or go pro. Sims averaged 9.7 points and 8.2 rebounds in 24 games as a junior.

Before anyone scoffs at that idea, understand how today’s athletes think. Former Longhorns forward Jaxson Hayes wasn’t necessarily ready for the NBA last season but still was a first-round draft pick.

“The biggest thing with Jericho right now is he’s recovering still from injury,” Smart said. “The reality of this time of year at this level, there’s often going to be times where guys maybe want to look at what feedback they can get from the next level. As a coach at this level, it would be unfair and unreality to not expect that.”

Meanwhile, Texas should have its full complement of guards coming back. That means another year with Courtney Ramey, Matt Coleman III and Jase Febres, who is still recovering from a knee injury. Andrew Jones would also have another offseason under his belt as he maintains full strength.

Donovan Mitchell had arthroscopic knee surgery on March 11. Gerald Liddell is still recovering from a strained back injury. Both are expected to be ready to play come October.

This team had no seniors, and there’s only one scholarship available. That spot is earmarked for Vandegrift’s Greg Brown III, the Gatorade state player of the year. The five-star recruit is expected to announce his decision on April 24.

Asked how he felt about the future, Smart said, “Absolutely. Very excited.”

“Part of how to learning how to win is going through different experiences, and some of those being really, really positive and sometimes it may be going through a tough experience or several,” Smart said.

“We’ve had some younger teams here in recent years,” he added. “When you have some guys who have been around the sun a few times together, then it does give you an opportunity to take advantage of that experience. That by itself doesn’t guarantee everything.”

An experienced team with a coach heading into his sixth season should make for a successful mix. Only right now, all anyone in the program is thinking about is staying safe in a national pandemic.

“Obviously it’s still March,” Smart said, “so it’s such a unique time with this situation.”