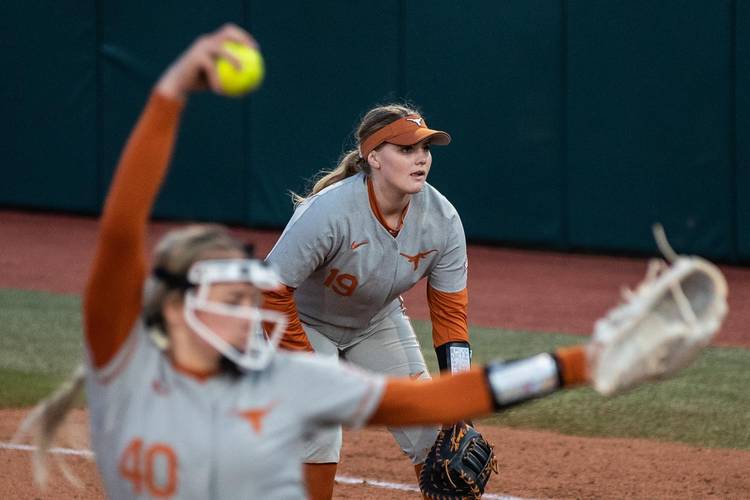 Miranda Elish will get a chance to pitch again for the Texas softball team.

An opportunity now exists for Duke Ellis to steal another base while wearing burnt orange.

And it turns out that the Turati twins may not have played their last tennis match at Texas after all.

On Monday evening, the NCAA approved a one-year extension for the eligibility of all its spring sports athletes. Earlier this month, the NCAA canceled its spring championships as concerns spread about the coronavirus pandemic. Conferences across the nations then called off their schools’ spring competitions.

Those cancellations led to the question of whether this would become a wasted year for athletes. Typically, NCAA athletes are allowed to compete in four seasons during a five-year window. With the ruling, the NCAA will allow “schools to self-apply waivers to restore one of those seasons of competition for student-athletes who had competed while eligible in the COVID-19-shortened 2020 spring season.”

The athletes most impacted by the decision are seniors whose careers had hung in the balance. An All-American pitcher, Elish had already stated that she would return to Texas if allowed by the NCAA.

Not all of UT’s seniors will follow in her footsteps, however. Kaitlyn Slack, the softball team’s starting shortstop, recently said that she intends on moving on with her life. On Sunday, golfer Emilee Hoffman announced that she was turning pro.

Texas did not immediately make athletic director Chris Del Conte, baseball coach David Pierce or softball coach Mike White available for comment on Monday. Previously, Del Conte said such a move would be “the right thing to do.”

How the return of these seniors would be funded had been a quandary since a NCAA committee first suggested the restoration of eligibility. On Monday, the NCAA declared that returning seniors will not count against a team’s scholarship limit and roster sizes in baseball will be expanded by an unannounced amount. Schools can also use the NCAA’s Student Assistance Fund to pay for those extra scholarships.

It will be left up to the individual schools to decide what kind of financial aid is offered to returning seniors. That amount can range from nothing to whatever the senior received this school year. Most spring athletes are already competing with partial scholarships.

“The Council’s decision gives individual schools the flexibility to make decisions at a campus level,” Penn athletic director and council chair M. Grace Calhoun said in a statement. “The Board of Governors encouraged conferences and schools to take action in the best interest of student-athletes and their communities, and now schools have the opportunity to do that.”

The NCAA did not extend the same grace to its winter sports. The NCAA canceled its postseason basketball tournaments and championship meets for both indoor track and field and swimming and diving. But since those sports had completed their regular seasons, those athletes will not get a restart.

NEW – Student-Athlete Leaders from Power Five schools across the country release a joint statement before the NCAA’s eligibility vote tomorrow.

This is important to a lot of individuals. Please share. pic.twitter.com/ZaHKlAY3Mp

The Athletic reported on Monday that a branch of the Division I Student-Athlete Advisory Committee formed and met over the weekend. This SAAC spinoff only featured representatives from the Power Five conferences. In a statement released to media outlets, these student-athletes announced the recommendations they gave to the NCAA Division I Council:

A Texas spokesperson declined to confirm whether any Longhorns were involved with this SAAC subset. The statement, though, claimed ties to UT diver Alison Gibson and distance runner Connor O’Neill. The names of 60 athletes appeared on the statement.

Other Longhorns also let their voices be heard. Elish and teammates Shea O’Leary and Shannon Rhodes each published tweets with the same wording on March 27. Elish has nearly 11,000 followers on Twitter, and her tweet said “If the @NCAA cares about the ‘student-athlete experience’ as much as they say they do, they will vote yes to giving student-athletes this year of eligibility back.” The post attracted more than 3,500 likes and hundreds of retweets.

Junior catcher Taylor Ellsworth had a message of her own. On Friday, she also took to Twitter to campaign for a “yes” vote. Ellsworth missed most of the 2019 season with a hand injury, and this spring’s re-do campaign had been limited to 17 games and 43 at-bats.

“Student-Athletes work/dream of winning a college championship. We deserve to experience and compete OUR 4-years,” Ellsworth tweeted. “@NCAA this experience is once in a life time. Ask anyone who has put sweat/tears/blood into this should have the opportunity to finish what they started. #voteyes”