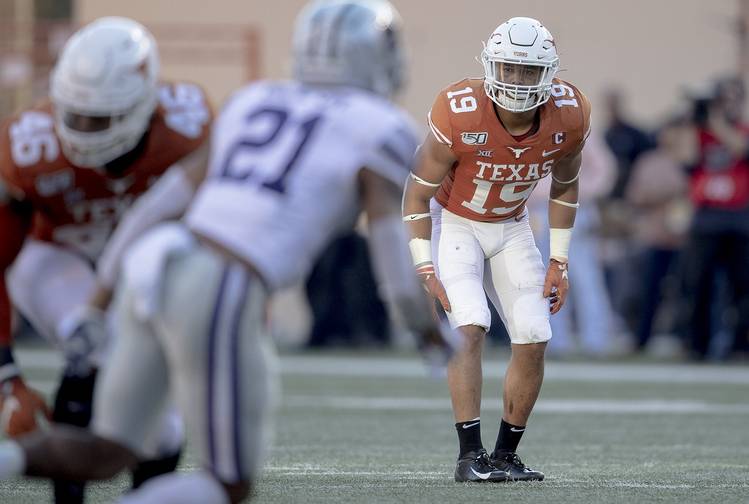 Texas defensive back Brandon Jones arrived in 2016 as the nation's top-rated safety prospect and leaves with hopes of being drafted in April's NFL draft. Offseason shoulder surgery, however, prevented him from working out at the NFL scouting combine and UT's pro timing day has been canceled. (Nick Wagner/American-Statesman)

Texas was supposed to host a NFL job fair for its seniors on Wednesday.

The Longhorns’ annual pro timing day, which was scheduled for Wednesday, would have given players with professional aspirations a chance to work out in front of NFL scouts and representatives. But UT’s pro day, along with similar senior showcases across the country, has been canceled and won’t be rescheduled.

“The best thing we can do as coaches is pick up the phone and give as good of recommendations as we can,” said Herman, who spoke with New England Patriots coach Bill Belichick on Sunday.

Longhorns safety Brandon Jones, who started 35 career games, was among those who planned on working out for scouts on Wednesday. He’ll instead spend the day in Frisco, where he’s been getting workouts in on the football field at Plano West High School and at a friend’s home gym.

He had shoulder surgery in January and was unable to work out at the NFL scouting combine in February. He still isn’t doing bench presses. High-pointing jumps during positional drills also may have been a problem on Wednesday. Jones was still looking forward to running the 40-yard dash and doing other agility tests for scouts, though.

“There’s people that are at a worse disadvantage than I am, if you think about the guys … that didn’t have the opportunity to get invited to the combine. Their pro day was going to be their combine,” Jones said. “It sucks, but it’s something that we can’t control. You kind of just have to play your cards how they are.”

But has Jones’ stock dropped because of his inability to participate in workouts this offseason?

If anything, that shoulder surgery may have forced him to find a different way to stand out. That’s how he became what one publication called “the most prepared safety in the 2020 NFL draft.”

Jones wasn’t sure when he suffered the torn labrum in his right shoulder, but soreness became a problem during the regular-season finale against Texas Tech on Nov. 29. He practiced ahead of the Alamo Bowl on New Year’s Eve but sat out the 38-10 win over Utah. Seven days later, he had surgery.

He began his rehab the day after his surgery, but neither the Senior Bowl on Jan. 25 nor the NFL combine fit on his timeline. Jones still wanted to attend the combine so he could participate in interviews and get his official measurements. He also had an idea of how to impress anyone he met in Indianapolis.

Shortly after surgery, Jones reached out to his agent and proposed that he study every defensive snap taken by all 32 NFL teams this past season. That plan turned out to be a bit ambitious. Jones eventually settled on three to four games for each team.

For the weeks leading up to the combine, Jones spent six to seven hours a day watching film on his iPad. He diagnosed defensive tendencies, deciphered offensive personnel and tried to guess coverage schemes. He wrote down critiques and questions. When stumped, he solicited help from former Longhorns teammates like DeShon Elliott of the Baltimore Ravens, Kenny Vaccaro of the Tennessee Titans and Quandre Diggs, who played for both Detroit and Seattle in 2019.

“As I got older, I found out the importance of film and being able to break down a team and how that can help your overall success on the field,” Jones said. “I took it upon myself and held myself accountable. It was hard work, but it’s definitely going to pay off. I enjoyed it.”

Jones published his notes in a 100-page binder, which was then handed out to the surprised and impressed teams he met with in Indianapolis. Bleacher Report draft analyst Matt Miller described Jones’ method of preparation as unique.

When news first broke about how he had prepared, Texas quarterback Sam Ehlinger said his former teammate was “professional.” Both Vaccaro and Diggs tweeted that Jones’ study habits were “impressive.” UT receiver Devin Duvernay, who also is a likely pick in this year’s draft, said Jones’ prep work didn’t “surprise me one bit.”

“That’s the guy he is,” Duvernay said. “He’s a competitor, a guy that wanted to get every edge he could.”

Jones is still rehabbing his shoulder three times a week, and his agent plans on putting together a workout video to send to teams in April. Jones also has been participating in FaceTime meetings each day with prospective employers in the NFL.

In a few weeks, he plans on returning to his hometown of Nacogdoches to watch the draft with his family and girlfriend. He expects that weekend to be a “super stressful time.” But at some point, a lifetime goal likely will be achieved.

“I’m not too sure where my emotions are going to be the day my phone rings,” Jones said. “Obviously, I’m going to make the best of my opportunity with whatever team takes a chance on me and be the best version of myself.”