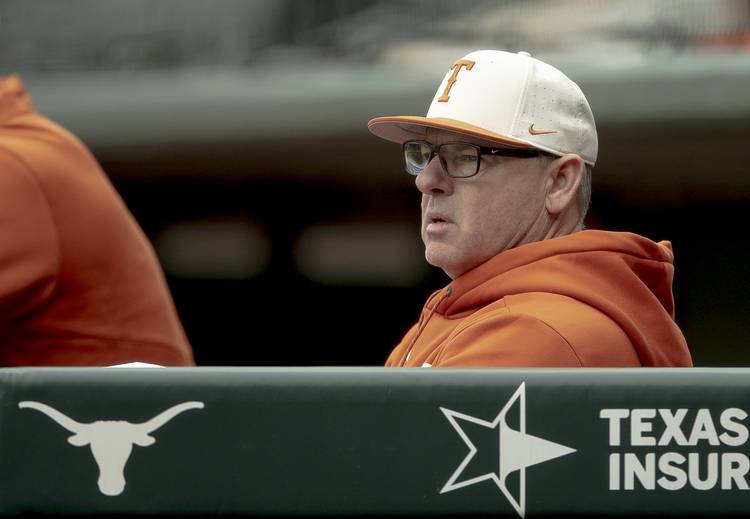 Texas baseball coach David Pierce called this week’s NCAA decision to restore a year of eligibility for all spring sports athletes a “victory” on Wednesday.

Monday’s ruling — and uncertainty over this year’s MLB draft — has created a numbers game for Pierce. He currently has 49 players tied to the 2021 roster. Those numbers could lead to some unbalanced equations, but Pierce said he’s willing to do that math.

“I would rather be the one making those decisions and even some of those tough conversations as opposed to the NCAA telling us exactly what we can or can’t do,” Pierce said. “I’m pleased that they voted that direction; I think it gives us options.”

Texas had 35 players on its roster this spring. Rated by Baseball America as the nation’s best, Texas’ 2020 recruiting class features 14 signees. Returning seniors won’t count toward a team’s 35-man roster or 11.7-scholarship limit, but a bloated dugout is still a bloated dugout.

Pierce said he has opened his four previous fall camps at Texas with between 41 and 44 players. In the past, baseball programs could rely on graduation, transfers and the MLB draft to clear room for incoming freshmen. Pierce still thinks there will be plenty of transfers this offseason. Graduation relief is not as clear-cut now, though.

Then there is the draft.

USA Today has reported that the MLB’s amateur draft may be as few as five rounds this summer. Under an agreement between MLB and the MLB Players Association, draftees can be paid up to $100,000 but must defer 90% of their signing bonuses. Undrafted players can’t sign for more than $20,000.

Over the past three years, 19 Longhorns have been chosen in what is normally a 40-round draft. Only two of those — Morgan Cooper in 2017 and Kody Clemens in 2018 — were selected in the first five rounds. Last year, pitcher Blair Henley and infielders David Hamilton and Ryan Reynolds were  taken in the seventh, eighth and 14th rounds.

Pierce estimated that junior pitcher Bryce Elder would be the only Longhorn taken in such a shortened draft. If the draft were to be expanded to 10 rounds, then there are “two to maybe three more kids of ours that fall in that category.” Texas’ 2020 class features likely first-round picks Jared Kelley and Jared Jones. Pierce believes that four more of his signees could be selected in the first five rounds.

“Our biggest concern are those kids that are two, three, four, potentially fifth-round kids that we were banking on them coming unless there were a first- or second-round type kid,” Pierce said. “I think that still remains the same.”

The construction of the 2021 roster probably won’t start until after the draft. That process will begin with getting decisions from senior starters Austin Todd, Duke Ellis and DJ Petrinsky. Pierce doesn’t expect relief pitcher Donny Diaz, a sixth-year senior this season, to return.

“I need to have some hard answers from these guys before I start making other tough decisions,” Pierce said. “And there’s going to be some (tough decisions).”

Via Zoom, Pierce spoke with members of the Austin media for around 45 minutes on Wednesday. It was his first press availability since a 9-1 win over Abilene Christian on March 11. The following day, fears over the spread of the coronavirus led the NCAA to call off the College World Series while the Big 12 suspended its spring sports for two weeks. One day later, the spring schedules in the Big 12 were completely cleared.

Texas ended its abbreviated season with a 14-3 record. UT was set to open Big 12 play on March 20. Eight of the conference’s nine teams had winning records when the season was called.

“I don’t know how many games we would have won because I think our league is so good this year,” Pierce said. “But I know it was going to be a fun journey with this team for sure.”