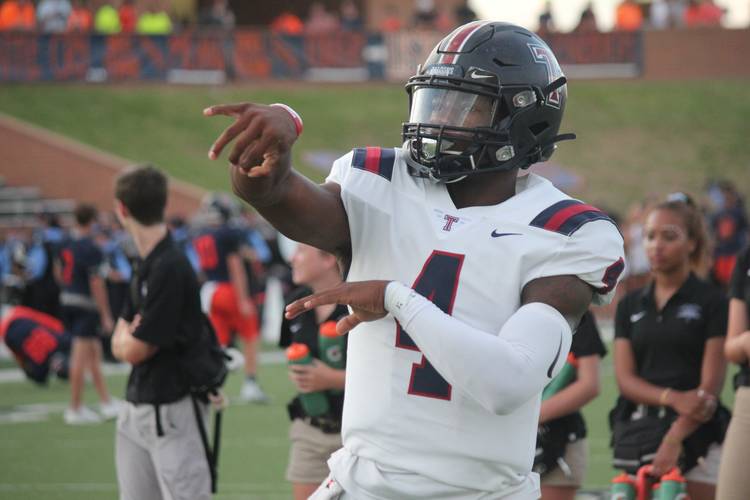 Jalen Milroe was born with a competitive streak that’s as big as the smile that’s constantly on his face. The Texas quarterback commitment has always wanted to win, even when he was a young kid playing car games with his two siblings. Milroe would never lose without a fight. It’s a trait the soon-to-be senior from Katy Tompkins carries today onto the football field.

“I’d tell the kids to guess what time we’d get back to the house from a trip or whatever. He would lose if his time wasn’t the closest,” said Quentin Milroe, Jalen’s father. “He’d accuse me of driving slow on purpose so one of his siblings would win the game.”

Milroe is a middle child. He’s grown into the face of Katy, despite attending Tompkins, which had won five varsity games before he took over as the starter his sophomore year. Tompkins has won 21 games over the last two seasons with Milroe orchestrating the offense. He picked up district MVP honors and started a new tradition of success at a school that’s been resting in the football shadows of Katy High.

“Jalen takes pride in building his own legacy with his group of friends,” Quentin Milroe said. “He went to school with the kids he went to school with growing up, and that doesn’t always happen in high school football. He watched his older brother, Marcus, play at Tompkins and get spanked. Jalen wanted to change the perception.”

Milroe has done exactly that over the past two years and has Tompkins poised to reach the playoffs for a third consecutive season. The 6-1, 192-pound four-star prospect is the fourth-ranked dual-threat quarterback in the country. He ranks 10th on the Fabulous 55. He picked Texas last July and hasn’t wavered.

He has passed for 4,109 yards and 39 touchdowns the past two seasons, adding 987 rushing yards and 18 touchdowns on the ground.

“The thing that impresses me most about Jalen is his urgency and toughness that he brings to the table,” said quarterbacks coach Brad Wilson Stanfield, an assistant at Richmond Foster who helps out young quarterbacks, including Milroe and 2020 UT signee Hudson Card. “A lot of young quarterbacks are into hype. Jalen is not that guy. He’s a genuine young man who cares more about the team than himself.”

Awesome to see @JalenMilroe impact & train up some young QBs in Houston this past month over SB. pic.twitter.com/ZSDKSxSHtS

Toughness is a requirement in the Milroe household. His parents met in the military. His dad is a federal officer who still practices grappling as a hobby. People around Jalen know his parents’ style helped form him into a young man who’s gravitational. Fellow prospects want to play with him, whether it be in college or on the 7-on-7 circuit.

“I’m more impressed by the way people react and talk about Jalen than I am about what he does on the football field,” his father said. “It means a lot to me when I hear other prospects talk about joining him or when a teacher comes up to me and says he’s a model student. He doesn’t put himself above anyone else and is social with everybody.”

Stanfield described Milroe as a hard-nosed quarterback with incredible arm talent. Card recorded the fastest velocity at the 2019 Elite 11 with a throw of 57 miles per hour. Stanfield, who still trains both quarterbacks, thinks Milroe would break that mark if the Elite 11 ends up taking place this year.

“Jalen is a grinder,” Stanfield said, comparing his mentality to current Texas quarterback Sam Ehlinger. “He’s a leader who can be vocal. He takes the game seriously and wants to put Texas back where it’s supposed to be. I think repping the state and staying close to home was important to Jalen.”

Quentin Milroe saw Jalen’s potential early. The two started working on quarterback drills when Jalen was four once his dad saw how advanced his son was at the position. Jalen would lap teammates in running drills during his flag football days. He went on to claim a FBU national championship as a sixth grader on a team that included current Texas offensive line commit Hayden Conner.

Quentin Milroe said he feels like Texas offered his son a family atmosphere, and the amount of communication between Longhorns coach Tom Herman and Jalen amid the coaching changes on offense helped him remain confident in his pledge.

“Jalen wants to major in business, so that gave Texas an advantage. Plus, playing with your home state on the front of your jersey is a selling point to kids from Texas,” Quentin Milroe said. “He’s already talked to new offensive coordinator Mike Yurcich, and Jalen appreciates being included in those conversations.”

Stanfield believes Texas’ quarterbacks room is in great shape for the future with Card and Milroe expected on campus when Ehlinger runs out of eligibility following the 2020 season.

“Those two will be great for each other because they can push each other in different ways and they’re both selfless people,” he said. “The sky’s the limit for Jalen. It’s all about the development he receives once he’s on campus.”