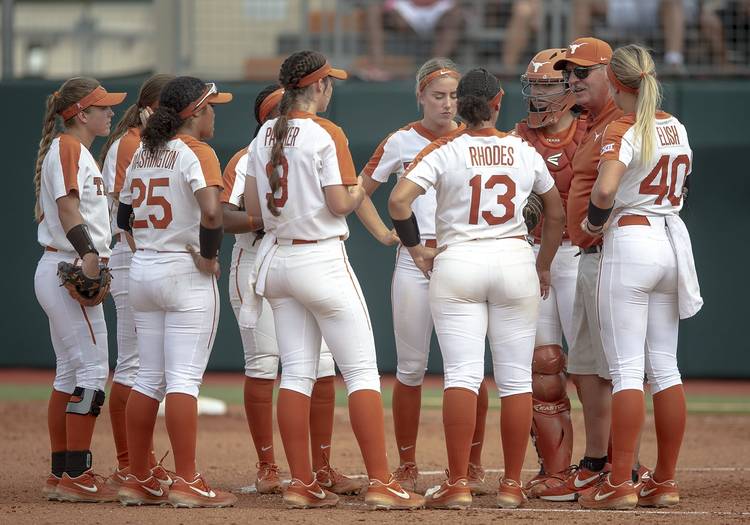 Earlier this week, Texas baseball coach David Pierce told reporters a story about a recent game of catch with two eight-year-olds from his neighborhood.

Susan Pierce gave her husband a hard time when she overheard him coaching the kids. But what else was he supposed to do? Pierce argued that is “what we do this time of the year,” and he had nobody else to coach since the coronavirus pandemic had led to the cancellation of Texas’ season.

Longhorns softball coach Mike White chuckled when he heard that story. Like Pierce, he has a lot of unexpected time on his hands these days. He’s done some reading, tended to 40 plants and worked on his sprinkler system. It’s been hard to not think about softball, though.

“I do a lot of stuff around the house to try to stay busy that way,” White said on Thursday. “You can’t shut the mind down, though, so even when you’re doing something, you’re thinking about it.”

Texas was preparing to fly to Alabama for a weekend tournament in Tuscaloosa three weeks ago, but it was called off before the team got to the airport. Later on March 12, the NCAA canceled its postseason and the softball season was suspended. The Big 12 eradicated the rest of the season the following day.

When its season was abruptly ended, Texas was boasting a 24-3 record. The Longhorns were ranked third in the country in the National Faspitch Coaches Association’s Top 25 poll. Texas had beaten both No. 1 UCLA and No. 2 Washington in February.

Could Texas have won its all? White thinks so. He noted that Janae Jefferson and Miranda Elish were again playing like All-Americans while youngsters like Courtney Day and Shea O’Leary were finding their strides. Perennial contenders UCLA (Rachael Garcia and Bubba Nickles) and Arizona (Dejah Mulipola) also were missing key players this season due to their involvement with the U.S. Olympic team.

“The stars were aligning a little bit for us,” White said. “We had a lot of work to do, but I think we had as good a chance as anyone out there.”

This week, the NCAA approved the restoration of the eligibility lost by its spring-sport athletes this year. That ruling meant that seniors across the country could extend their careers into 2021. Three Texas seniors, however, have decided to move on anyway, White told the American-Statesman.

Starting shortstop Kaitlyn Slack will head to graduate school at Kansas and join former UT assistant coach Jennifer McFalls’ staff in Lawrence as a graduate assistant. Reagan Hathaway, a fifth-year outfielder who already has a biology degree, won’t return next season. Neither will reserve outfielder Tuesday DerMargosian, who is studying journalism.

DerMargosian, Hathaway and Slack all appeared in what turned out to be the final game of the season, a 7-0 win over New Mexico on March 8.

“It’s very hard for them. … This is an uncontrollable, there’s nothing you can really do about it,” White said. “You’ve just got to go forward. You always talk about not living with regret.”

Texas had six seniors this season. After the NCAA’s waiver was announced on Monday, starting pitcher Miranda Elish tweeted “ONE MORE YEAR WITH MY GIRLS!! LETS GOOOOO.” Outfielder Kaitlyn Washington and utility player Shannon Rhodes also will come back for their re-do senior seasons.

Elish is a two-time All-American who pitched a perfect game in her final outing this spring. Rhodes, who has started in both the infield and outfield, was hitting .364. Washington needs only six more doubles to set UT’s career record.

White doesn’t anticipate the loss of any players to the NCAA transfer portal, but the team hasn’t held any end-of-the-season meetings either. Texas signed six players in its 2020 recruiting class, so as many as 23 names could appear on the 2021 roster.

“We made a good decision with 25 lockers in the locker room,” White joked about the softball team’s under-construction training facility.