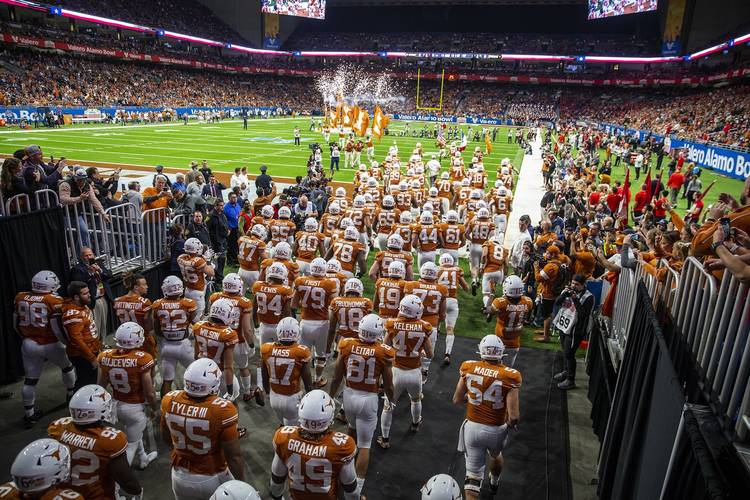 March and April were going to be critical months for the Texas football program. And they still are, just for wildly different reasons.

Ditto for new defensive coordinator Chris Ash. “From what I’ve seen over the last couple days watching our guys work out, I’m really excited about the players,” he said.

Herman already had the Longhorns’ spring schedule mapped out. The team would spread its 15 allowable practices across Tuesdays, Thursdays and Saturdays leading up to the spring game on April 25.

Instead, everybody’s sitting at home, sacked by the coronavirus pandemic that has put the sports world on hold.

Missing out on 15 spring practices is one of several disadvantages, but there are some positive green shoots, too for Texas not having spring football.

Pro: Exposing a veteran quarterback to any contact in the spring is always a dicey proposition, but anybody can get hurt at any time, right? Ehlinger aggravated a rib injury during offseason workouts and was shut down for the final two weeks. Herman indicated it was a pain tolerance issue. Nobody should get hurt sitting on their couch, though.

Con: Ehlinger needed as much on-field practice time with Yurcich that he could get. Any quarterback would need that with any new play-caller. Sure, Yurcich can turn on the tape and see fourth-and-goal at the Sugar Bowl or any long-armed throw from last season. But both need to understand how each other thinks.

Statistically, Ehlinger is already one of the best quarterbacks in UT history. The Westlake product has 8,870 career yards with 68 touchdowns against 22 interceptions. He simply needs a Big 12 title.

“Sam’s a hell of a player. And he’s a big part of why I chose this position,” Yurcich said in February. “He’s an experienced quarterback. He’s a proven winner.”

Pro: Running backs have only so much tread on their tires, so sitting them down for an extended period should save them for the fall, theoretically. Considering how injuries tore through this group last August, nobody should be complaining about keeping anyone healthy.

Keaontay Ingram, who has been nicked a few times the last two years, should be at full strength come the fall. He’s averaged 5.5 yards per carry as a Longhorn. Former quarterback Roschon Johnson (649 yards, seven touchdowns) is staying at running back after an impressive freshman season.

Freshman Bijan Robinson, the highly-touted star from Tucson, Ariz. who signed as the nation’s No. 1-ranked running back prospect, didn’t enroll early anyway, so he’ll still arrive in the summer. He hasn’t missed anything yet.

Con: Ossai played like a man possessed in the Alamo Bowl, mostly because he was finally playing off the edge. He was sensational with nine tackles, six for loss, and three sacks. Herman and Ash both want to make him a featured player in a new four-man front.

“Yeah, the sky’s the limit,” Herman said of Ossai in February. “I mean, he’s aggressive, he’s twitchy, he’s long, he’s fearless. He’s a quick learner. He’s really, really smart. So I love him. I absolutely love him. And I think this will be a great fit for him.”

Ossai and fellow linebacker Byron Vaughns will both be converting to the new “jack” position. There’s just one problem. It’s hard to learn a new position like this if you can’t practice.

Pro: Keondre Coburn, a redshirt freshman last season, has all the tools to become a multi-year starter and a star. But it was hard to see him at times in the middle of the three-man front Texas utilized. He finished with 26 tackles and two sacks in 13 games.

Pairing Coburn alongside Ta’Quon Graham inside should help both players. Graham (3.5 sacks in 2019) struggled to find a consistent pass rush around the end last season. Putting two solid anchors in the middle should help Texas stop the run.

Marqez Bimage, Moro Ojomo and T’Vondre Sweat are two other blossoming athletes, and Jacoby Jones is heading into his senior season.

Defensive line coach Oscar Giles will divvy up the coaching duties with Mark Hagen, who has almost three decades of experience. They’ve got plenty to work with.

Con: Obviously, Texas is at a clear disadvantage with two new coaches, a new four-man formation and no on-field practice time. Then again, it’s not like any of these athletes are new to playing with their hand on the ground, either. A few practices in the fall would knock the rust off quick.

Just like the offensive players, Texas’ defensive players need to understand what’s expected of them from the coaches. Of course, Giles and Hagen’s instructions would be simple: Pin your ears back and go get the quarterback. Texas slipped to sixth in the Big 12 last season with only 27 sacks.

The battle at slot receiver

Con: The departure of Devin Duvernay, who had the second-most receptions in the country last season, is a clear negative for 2020. But if we’re being realistic, few expected him to explode like he did. Remember, the coaching staff approached Duvernay about moving to the slot position just before training camp last summer.

It would seem the position is tailor-made for Jake Smith, who had 25 catches and six touchdowns as a freshman last season. But he also disappeared for long stretches in October and November. Perhaps Duvernay was just that good. Everyone must wait their turn.

In February, Herman said that multi-purpose threat Jordan Whittington will move back to the slot after a temporary move to running back. “This will be good for him to be trained again as a slot receiver and allow us to do a lot of things with him,” Herman said.

The negative here is that neither Smith nor Whittington can strut their stuff this spring. That makes for an awfully big position battle for the fall.

Pro: If you want to question Caden Sterns and B.J. Foster’s athletic ability, that’s fine. If you want to challenge their tackling skills, go for it. But you simply cannot pass any judgment on their heart, desire and will to play college football.

Both defensive backs tried to play as much as they could last season despite multiple injuries. They ended up playing nine games each, and Sterns still finished third on the team in tackles (58). By season’s end, Foster could barely lift his arm over his head.

Foster is expected to be cleared this August from offseason shoulder surgery, so he would have missed the spring anyway. “It’s something we had to wait until his nerve calmed down enough for him to have a successful rehab,” Herman said.

Those two should be pivotal on the back end of the defense. There’s been a lot of player movement elsewhere. Anthony Cook is moving to nickel. DeMarvion Overshown is going to linebacker. Ash was “really impressed” with cornerbacks Chris Brown and Josh Thompson, Herman said in February.

This position group had so many injuries last season, it’s due for something positive to happen in 2020.

Veteran Denzel Okafor, who has played in 39 career games, plans on leaving via the transfer portal. He would be a grad transfer somewhere. J.P. Urquidez announced similar intentions last fall.

Backups like Rafiti Ghirmai, Tope Imade and Reese Moore will get their chances. Isaiah Hookfin redshirted last season as a freshman.

Pro/con: Here’s the great unknown. Just how will players stay in shape on their own at their various outposts? The benefit of being on campus is that strength coach Yancy McKnight can keep tabs on players — what they eat, what they lift and how much they weigh.

Texas’ 2020 success, like every other team, may be dependent on how well players keep themselves in shape.

On Wednesday, UT President Gregory L. Fenves announced that summer courses would also be held online, effectively closing the campus for two more months. It was hoped the campus could reopen at the start of summer school in late May or early June. Now, that appears to be off the table.

Herman and his coaches can’t monitor what’s on every athlete’s dinner table. They can’t truly know what athletes are doing day in and day out. Big 12 rules dictate they can only see their players through webcasts, in addition to talking to them on the phone.

Thus, it’s unclear how Texas will truly look when football resumes, assuming it resumes at all in 2020.