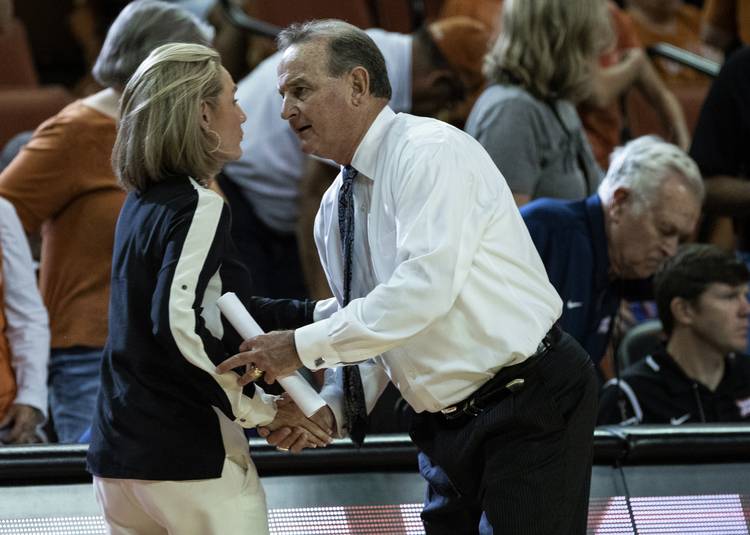 A key vacancy in the Texas athletic department has been quickly filled.

Vic Schaefer has been hired to coach the women’s basketball team at Texas. On Sunday afternoon, UT athletic director Chris Del Conte tweeted out a picture of Schaefer with a caption that read “Guess who’s coming to the Forty… .” The 59-year-old Schaefer, who was born in Austin, spent the past eight seasons as the head coach at Mississippi State.

The news of Schaefer’s arrival comes two days after Texas declined to extend the contract of Karen Aston. She had been UT’s coach since the 2012-13 season. She compiled a 184-83 record with the Longhorns.

Texas has not yet released the details of Schaefer’s contract. According to reports, he was set to make $1.65 million at Mississippi State in the upcoming school year. Including her base pay and benefits, Aston pulled in $745,000 during the last year of the three-year extension she signed in 2016.

“In looking for a new head women’s basketball coach, there was one name that continuously came up as the perfect fit for The University of Texas, and that was Vic Schaefer,” Del Conte said in a statement. “He’s a coach who knows the state of Texas and the national women’s college basketball landscape extremely well.”

In a news release announcing UT’s separation from Aston, Del Conte stated that “we have determined to move in a different direction with our continued goals to work to contend for conference championships and NCAA elite status. ” Before the weekend had wrapped, Schaefer was tasked with leading that charge.

In his eight seasons at Mississippi State, Schaefer went 221-62. The Bulldogs were beaten in the NCAA championship game by South Carolina in 2017 and Notre Dame in 2018. Mississippi State ended a 2019-20 season that was cut short by the coronavirus pandemic with a 27-6 record and the No. 9 ranking in The Associated Press’ poll.

Under Schaefer, Mississippi State won two regular-season championships in the Southeastern Conference. It was also the last team standing at the SEC Tournament in 2019. But of those 221 wins with the Bulldogs, perhaps none was bigger than a 66-64 conquest of UConn in 2017. Thanks to Morgan William’s buzzer-beating jumper, Mississippi State advanced to the NCAA championship game and ended UConn’s 111-game winning streak.

“Knowing what I know from 35 years of coaching and a lifetime in the state, the storied history of Texas Women’s Basketball is something very special to be a part of,” Schaefer said in a statement. “I certainly feel really fortunate and just truly humbled to be entrusted with the opportunity to build on the years of success and help lead the Longhorns back where they belong – among the nation’s elite.”

Before landing at Mississippi State, Schaefer spent 15 seasons as an assistant coach at Texas A&M and Arkansas. From 1990 to 1997, he served as the head coach at Sam Houston State. Schaefer went 80-110 with the Bearkats.

Sophomore forward Charli Collier averaged 13.1 points and 10.5 rebounds during an all-conference campaign. Guard Celeste Taylor was voted onto the Big 12’s all-freshman team. On Sunday, Taylor announced that she intends to stay at Texas and play for Schaefer.

Schaefer is the fourth coaching hire for Del Conte since his arrival in Austin in December 2017. Mike White, who was lured away from Oregon, is 70-20 in his two years with the Texas softball team. Former Kentucky coach Edrick Floréal’s track and field program at UT boasted two individual national champions in 2019. Bruce Berque was promoted from his interim status after navigating the men’s tennis team through a 2019 season that featured an NCAA title and former head coach Michael Center’s involvement in the nationwide college admissions scandal.