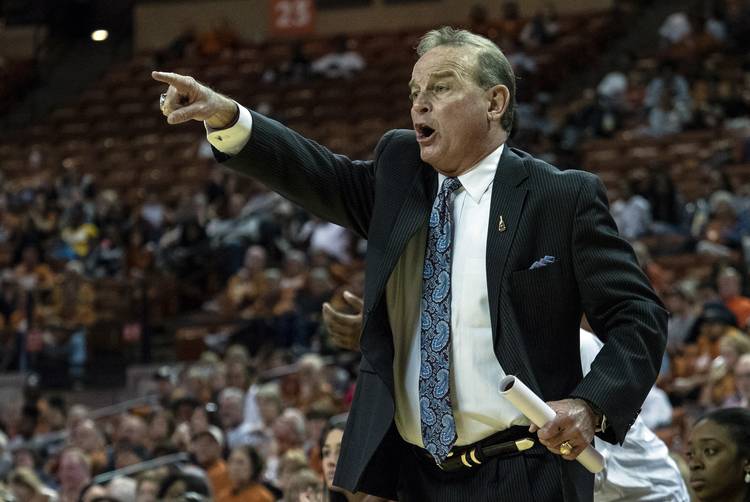 Everything in Schaefer’s life, he believes, is driven by a higher purpose.

“God has you in a place where he wants you,” Schaefer said Monday during his introduction as Texas’ women’s basketball coach.

By joining the Longhorns, Schaefer is now the torchbearer for one of the most prestigious women’s athletic programs in the nation. And the ultra-competitive 59-year-old made no bones about the fact that “I’ve got no desire to just be good. I want to win championships.”

Just being good “is a miserable way to live,” he said.

“The thing you learn is that you’ve got to hang your hat on something,” Schaefer said. “If somebody describes your team as a tough, aggressive team, that doesn’t say anything about your skill set. But it does describe the character and makeup of your program.”

Coaching basketball is merely what Schaefer does. It’s not who he is, though. You have to understand his past and why he wanted to come home.

Schaefer was born at what was Brackenridge Hospital, just south of the UT campus, and grew up in south Houston. He graduated from Texas A&M and joked Monday about sitting on the 48th row of Royal-Memorial Stadium “with icicles coming off my baseball cap on a Thanksgiving football game.”

Col. Charles Albert Schaefer probably wouldn’t believe his youngest now works at “t.u.” His mother Amy Dorothy, a registered nurse better known as “Dot,” might approve. Their Austin home was hit by toilet paper vandals after Texas victories. “Pack our crap,” Charles once told his wife when he’d had enough. The Schaefers moved to Houston in the mid-1960s.

The blue-collar couple were longtime Texas A&M football season ticket holders, and the family would gather around the radio whenever they weren’t in College Station.

Schaefer’s parents are now in La Grange. “The Colonel,” as he still calls his father, died on Dec. 29, 1988 and was buried on New Year’s Eve. Dot passed away on Oct. 31, 2004. Now, it’s just Vic and his older sister Elaine, who is 14 years older and was Vic’s grade-school teacher. She now lives in Pearland.

“My sister gave me my first C when I was in the first grade, which resulted in the first good butt-whuppin’ by the Colonel,” Schaefer said.

Schaefer said he remembers going to Wyatt’s Cafeteria as a middle schooler. His parents would split the meat portion of the entrée, and “I would have a meat to myself because I was a growing boy. As a kid, I never knew that’s all we could afford.”

Schaefer took nothing for granted, mostly because sheer athleticism wasn’t exactly his meal ticket. He was an all-state athlete in football, basketball and baseball at Houston Lutheran and got two seasons of basketball at Alvin Community College. However, that was it.

Baseball was Schaefer’s choice. He gave it a go as a young umpire, working for the Brazos Valley Chapter of the Texas Association of Sports Officials while at A&M. After graduating, he worked a part-time job substitute teaching during the day and umpired baseball games at night.

Schaefer thought about assistant football coaching jobs, but he ended up taking a job that paid $17,300 at Houston Milby, about 10 minutes from his parents’ house. He was the assistant boys basketball coach and head tennis coach off and on and umpired baseball games on the side.

Finally at age 29, Schaefer got the women’s basketball job at Sam Houston State, his first attempt at recruiting female athletes. It didn’t go particularly well. He went 80-110 in seven seasons in Huntsville.

Along the way, Schaefer came to Arlington and went recruiting at a junior college tournament. He ended up meeting a rival assistant coach, Holly Davis from UT-Arlington. They got married in 1993 and had twins, Blair and Logan.

Vic Schaefer would eventually hook up with Arkansas coach Gary Blair, and the duo came to Texas A&M in 2003. Together, they led the Aggies to the 2011 national title.

What came next was something of a now-or-never moment for Schaefer: Do you want to be an assistant coach or head coach?

Schaefer would compile a 221-62 record in eight seasons with Mississippi State, a school that was selling $25 season tickets when he arrived. Now, the ticket list has 6,000 names. In 2018, Schaefer was named Naismith national coach of the year as the Bulldogs made back-to-back appearances in the national title game.

Normally, Texas introduces all new head coaches with a press conference with all manner of pomp and circumstance. The coronavirus pandemic whittled it down Monday to a teleconference with scribes and a video call with TV reporters.

“This is such a strange way to introduce an incredible human being,” Texas athletic director Chris Del Conte said.

Schaefer’s hiring was an incredible whirlwind. Del Conte announced Karen Aston would not have her contract renewed mid-morning Friday. Within hours, he  had hired a search firm to reach out to Schaefer’s agent. Late in the day, he called Mississippi State athletic director John Cohen.

Shawn Eichorst, UT’s deputy athletic director, suggested the Longhorns have a plane waiting on Schaefer in Starkville for Saturday morning. The coach agreed to come late Friday night, and then Saturday, the entire Schaefer family emerged on the tarmac in Austin.

“He brought the whole enchilada with him,” Del Conte said. “When I saw him and his family get off, I said, ‘OK, we got a shot.’”

“Coach says if you can get Vic Schaefer, that’d be unbelievable,” Del Conte said. “Go get him.”

School officials were still working out the final details of Schaefer’s contract, but both sides have a memorandum of understanding. The final contract must be approved by the UT System Board of Regents.

Schaefer was making about $1.6 million this past season at Mississippi State. It was considerably higher than Aston ($745,000).

Schaefer met with Cohen about 1:45 p.m. Sunday and then met with his Mississippi State players around 2. Del Conte broke the news with a tweet via a photo he took with the Schaefer family standing under a mounted Bevo head.

“I’m walking away from what’s already been ranked as the preseason No. 3 team in the country,” Schaefer said. “But again, it comes back to a calling, an opportunity you just can’t walk away from.”

Schaefer understands the expectations and that “my job is to restore this program to the national prominence it once had.”

“It was just evident to me that this was an incredible opportunity,” Schaefer said, “and it’s a chance for me to come home.”