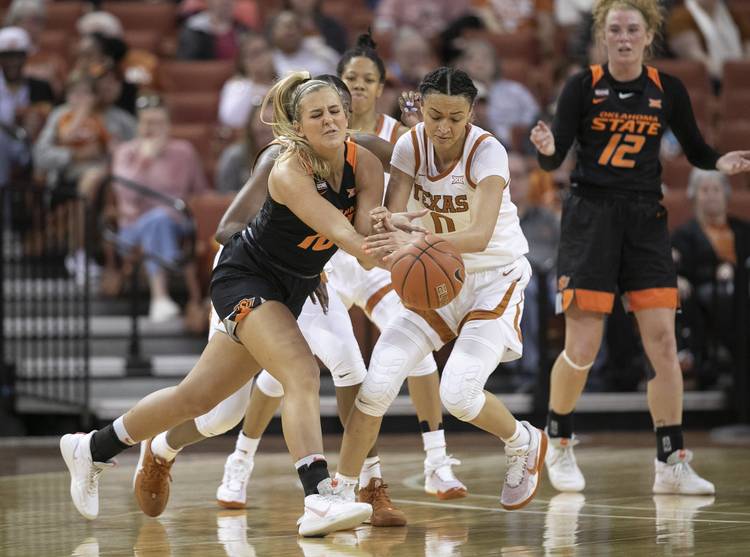 When practices resume, Celeste Taylor better be down in a defensive stance.

Charli Collier better pick up her intensity in the middle, too.

Like most coaches, Schaefer believes the offense will come. Expect fanatical defense and hellacious effort to be the Longhorns’ central focus for the immediate future.

“People come and watch us play, we ain’t standing around in a 2-3 zone,” Schaefer said this week on a teleconference. “We ain’t playing hope-you-miss defense. We’re picking your butt up when you hit the city limits, and we’ll show you the door when you leave. And that’s just how we play.”

In Schaefer’s first season at Mississippi State, the Bulldogs ranked 187th nationally in total defense, allowing 62.3 points per game. The next year, the Bulldogs jumped to 72nd. By year three, Schaefer’s club ranked 38th and then stayed inside the top 40 for several seasons.

And the offense eventually came as Mississippi State’s recruits got older and more experienced. The Dawgs were among the top 15 nationally in field goal percentage the last three seasons and led the SEC the last two.

Mississippi State moved quickly to fill Schaefer’s vacancy. According to the Jackson Clarion-Ledger, Mississippi State will hire Old Dominion coach Nikki McCray-Penson, a two-time SEC player of the year and 10-year pro who has since gone into coaching.

It’s unclear who McCray would hire for her staff, but Schaefer’s top assistant Johnnie Harris now may follow him to Austin.

At Texas, Schaefer is inheriting a roster with a lot of holes. Five seniors are departing, including Joyner Holmes, Lashann Higgs and Sug Sutton. It was a team that played solid defense overall and did well on the boards, but fouled too much and was too inconsistent.

Collier went from a role player to a starter who finished the shortened season with 16 double-doubles. She had the third-highest rebounding total (314) for a sophomore in school history. Taylor had a strong freshman season and led the Horns in made 3-pointers (31) and was third in steals (42).

Former UT coach Karen Aston projected Harvard grad transfer Katie Benzan to be the team’s starting point guard next season. But it’s unclear if Schaefer will feel the same. Benzan sat out the 2019-20 season to be eligible. She left the Crimson as the school’s all-time leader in career 3-pointers (287).

Aston signed four other recruits in November, including Shay Holle, a 1,000-point scorer from Westlake. The Horns also have a commitment for the 2021 recruiting class from Paige Bradley, the daughter of Texas ex Amie Smith Bradley.

If the whole idea of hiring Schaefer was to ignite competition against Baylor’s Kim Mulkey, then Texas athletic director Chris Del Conte succeeded. Big 12 women’s basketball up and down Interstate 35 should be far more interesting from here on out.

“I don’t particularly like the fact that every article is about Karen Aston not being able to beat me and Baylor,” Mulkey said this week on ESPN Central Texas 1660 AM. “If that’s the case, we got some Baylor coaches that need to be fired, huh? Because they haven’t been able to beat some programs, either.

“So what if you can’t beat Baylor?” Mulkey said. “There’s a lot of teams that haven’t beaten Baylor.”

Schaefer certainly had no issues taking on the SEC’s best. Mississippi State was looking up at programs like Tennessee and South Carolina when he arrived in Starkville eight years ago. Now, the Bulldogs are among the nation’s elite.

Schaefer just hopes to transfer that success to Texas.

“It’s a tremendous responsibility to be the head women’s basketball coach at the University of Texas,” Schaefer said. “I don’t know that there’s a greater responsibility in all of college athletics, because of the history and the storied tradition that program has had.”

Schaefer said “there’s not enough time in the day” to praise legendary UT women’s coach Jody Conradt and her impact on the sport itself. “I’m just honored to have an opportunity to restore it to where it needs to be on the national scene,” he said.

Hearing all this, Del Conte was inspired.

“Put me in, coach,” the athletic director said.

“All right,” Schaefer interjected. “You gotta hustle to the table and get that warm-up off a little quicker.”