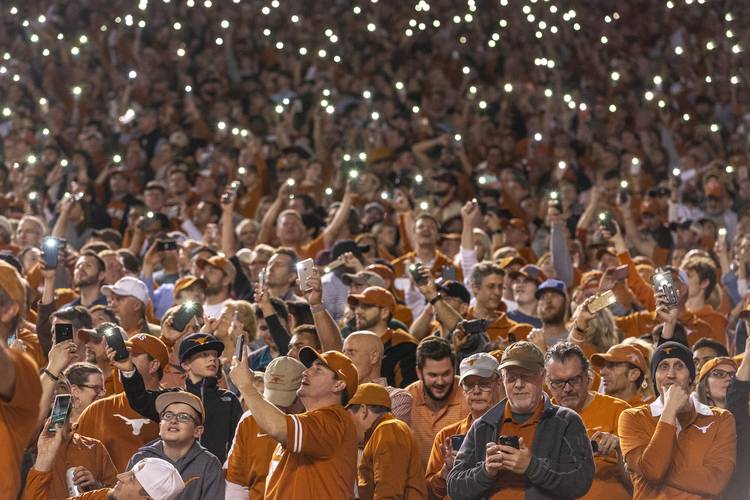 Speculation is rampant all across the college landscape about how the coronavirus pandemic will impact the 2020 football season. Last week only proved that nobody knows anything.

Angst is spreading exponentially by the day, that much is certain.

Administrators are starting to make some hard financial choices as the reality of the COVID-19 stoppage takes root. The college athletic landscape could look dramatically different when this is over. Take away football — the economic driver of it all — and all bets are off.

“You have to have the optimistic view of where we’re at today,” Texas athletic director Chris Del Conte told the American-Statesman. “You have to have a positive attitude about what is going on in our society.

But Del Conte acknowledges football in 2020 could look radically different. Multiple ideas have been floated nationally. It could mean a 12-game regular season played with no fans, an idea even coaches aren’t keen about. Would fans even want to come and sit shoulder-to-shoulder in a packed stadium?

Maybe it’s a nine-game season with only conference games. Problem is some leagues play only eight conference games. Maybe it means pushing college football into the spring semester and overlapping with basketball.

“In some conversations with SEC officials and NCAA, I think they’ve come to the conclusion that you can probably start football as late as October and still have a 13-game schedule,” Texas A&M chancellor John Sharp told the Texas Tribune.

A SEC spokesman would later issue a statement saying the league office was unsure of what discussions Sharp was referring.

Big 12 officials are not going public with their leanings, because, frankly, it’s guesswork at best.

“We don’t know when somebody is going to tell us it’s going to be OK to go back to close contact,” Big 12 commissioner Bob Bowlsby told the Dallas Morning News. “I suspect that medical experts and scientists are going to be slow to give the green light on that. The magic start date is probably a mirage.”

Oklahoma athletic director Joe Castiglione told reporters on Wednesday, “I don’t want to start down a path of trying to throw one model out there over the other.”

But Texas, Oklahoma and the Big 12 are looking at various models. “That’s just being prudent,” Del Conte said.

“Coach (Tom) Herman had a good point the other day,” Del Conte said. “Coach (Darrell) Royal brought everybody back in August. Back in the day, you sent everybody home back to the oil fields.”

At least the Big 12 modified its rules in late March to allow schools to send workout equipment and nutritional supplements to athletes. Coaches can now spend four hours per week on webcasts with the athletes, too. Still, coaches can’t be certain how athletes are working out or if they’re lounging around and eating poorly.

In a post on the school’s website, Florida State offensive lineman Andrew Boselli announced he has tested positive for coronavirus and “woke up feeling like I’d been hit by a bus.”

“When I first heard the news of the coronavirus pandemic, I, like most, saw the studies that said it was primarily a danger to the elderly and figured it wouldn’t have much impact on me, my family or friends,” Boselli wrote. “I even had plans to spend Spring Break on a cruise to the Bahamas.

“The last few weeks, though, have shown just how wrong I was, and just how seriously we all need to treat this outbreak.”

Boselli’s announcement is a dangerous reminder for coaches who are itching to get back to work.

“I think it’s conceivable to me, as long as we’re in that early July window, we can get ready for the start of the season for where it is right now,” Notre Dame’s Brian Kelly told NBC.

Coaches are likely to stay mum for a while considering the mess Oklahoma State’s Mike Gundy created. While admitting “I don’t pretend to be a doctor,” Gundy suggested the Cowboys could be brought back to their facility on May 1 and essentially work under quarantine there.

The Big 12 has already announced a complete suspension of all athletic activity until May 31.

“In my opinion, if we have to bring our players back, test them, they’re all in good shape,” Gundy told OSU reporters. “They’re all 18, 19, 20, 21, 22 years old. They’re healthy. A lot of them can fight it off with their natural body, the antibodies and build-up they have. There are some people that are asymptomatic. If that’s true, yeah, we sequester them.”

Gundy then framed the issue in economic terms. “People say that’s crazy,” he said. “No, it’s not crazy. Because we need to continue to budget and run money through the state of Oklahoma.”

Asking amateur athletes to come back to the football facility when the student body as a whole has been sent home is absurd. Oklahoma State officials were so caught off guard that they issued a statement hours later saying medical professional will make the call.

Meanwhile, schools are taking a hard look at budgets. Iowa State athletic director Jamie Pollard announced a one-year pay cut for coaches aimed at lowering the overall payroll by $3 million. Bowlsby has announced that every member of the Big 12 office took a 10% salary reduction. Pac-12 commissioner Larry Scott cut his pay by 20%, and the Pac-12 Network laid off 8% of its workforce. NCAA officials also are taking a 20% haircut.

The NCAA passed a waiver for all spring sport athletes that allowed them another year of eligibility. But some schools are thinking about not inviting those athletes back.

Wisconsin athletic director Barry Alvarez went on his radio show and said, “What we tried to do was encourage our seniors to go ahead and, if you’re going to graduate, graduate and move on with your life.”

Alvarez said 35 seniors would be impacted across the Badgers’ 10 spring sports. The school is facing a $4 million revenue shortfall.

Louisiana Tech athletic director Tommy McClelland also announced he would only honor another year for baseball and softball athletes. “We would love to be able to do it for all of our sports, but from a budgetary standpoint, it’s just not feasible,” he said in a statement.

Cutting sports is an option, but the NCAA requires that Division I schools sponsor 14 programs. Any school that wants to cut a spot may face Title IX complications.

Cutting sports isn’t likely at Texas. The athletic department has $46 million in endowment money set aside, according to audited records. The university as a whole had endowments totaling $4.3 billion as of Aug. 31, 2019.

The school’s fiscal year does not end until Aug. 31, so Del Conte still has some time before having to make any serious changes for the 2020-21 athletic year. UT athletics generated $224 million in revenue but spent $207.4 million during the 2018-19 athletic year, according to audited figures. Football alone generated almost $157 million.

Del Conte said the football season ticket renewal rate was at about 50% before the deadline was extended to May 1. The school has implemented payment plans. But UT will have to give refunds if football is canceled.

When will that happen? Nobody knows for sure.

Texas coach Vic Schaefer on his all-out defense: ‘We ain’t standing around in a 2-3 zone’